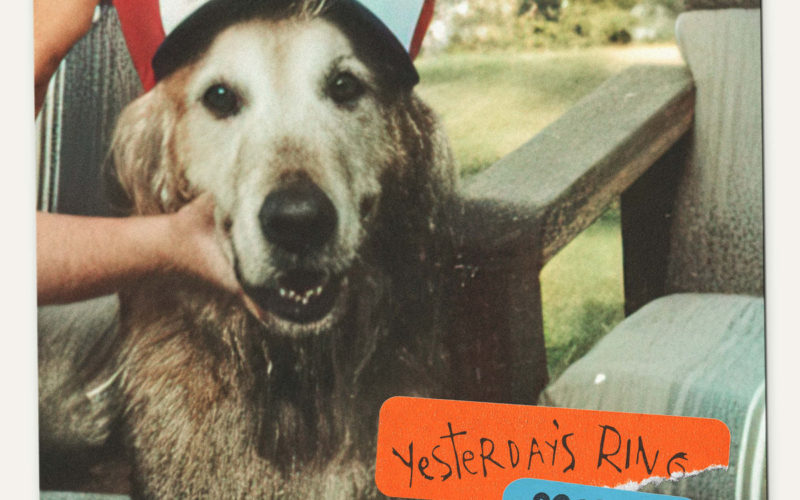 Yesterday’s Ring are from Montreal, Canada, and feature members of The Sainte Catherines and Medictation. Yesterday’s Ring allegedly formed on the porch of a punk house in Memphis Tennessee in 2000. In case you think this is a far fetched story, their bandcamp page offers this up: “Yesterday’s Ring is a country-folk band from Montreal founded in 2000 in Memphis, Tennessee, by singer Hugo Mudie, guitarist Fred Jacques and guitarist Louis Valiquette. Yesterday’s Ring was born from road adventures while the musicians were on tour in the United States with their punk band, The Sainte Catherines.” The sound here is a fair step away from the emotive melodic punk rock of the aforementioned bands, however. The sound here is I suppose more in the realms of genres such as alt-country, “acoustica” or slowcore (the latter a term I tend to avoid using where possible as I don’t fully understand what it’s meant to be conveying, but hey ho).

What we have here is some well arranged strum-alongs overlaid with some awesome fingerpicking, and underscored by ethereal peddle steel guitar, and chirpy banjo, as well as, at times a smattering of brass. The lead vocal is suitably bourbon-soaked and rough-edged. The themes here are as you’d expect (i.e. the good, relatable stuff): melancholy, drinking heavily, fucking up your life, bad decisions, procrastination, inability to yank your ass out of the rut you find yourself trapped in, leaving, not leaving, and the one that got away. You get the picture.

Whilst I’m a self-confessed non-expert in this type of stuff, and would definitely never choose to deliberately convince anyone otherwise, when presented with stuff of this nature, I find it’s fair to say “I love owt like that, me”.

Arguably, the big players of this kind of shit (I’m looking at you, Frank Turner and you, that guy from The Gaslight Anthem whose name I can’t be arsed looking up) are making music lacking any emotional depth or ‘chewiness’ for want of a better turn of phrase. Hence I suppose, droves of absolute pillocks gobble it up like they’re on for a sports eat down at the Chinese buffet. Fuck that noise. Corrine Bailey Rae cosplaying as a punk rock bard for clean-shirts, innit? The audio equivalent of a dog curling out turds on your lawn, mate.

So at this point, I’ll invite you to hit play on the bandcamp player below (for future reference, this is how it should be done, Frank, now fuck off back to charging middle-class wankers a fortune to write songs with you by a campfire, you tragic prick):

I’m possibly about to massively contradict the paragraph above where I declared myself to be a “non-expert”. Yep, let’s go all in. Why not, eh? Connoisseurs of the good, good shit such as myself have found themselves embracing bands the likes of Lucero (although they are more of a rock band) over the past 20-odd years or so. Similarly the solo work of Chuck Ragan (Hot Water Music), Frankie Stubbs (Leatherface), Tim Barry (Avail), and Mike Hale (Gun Moll, In The Red) to name but a mere few. Whilst we are here, shout out to Frankie’s amazing guest vocal contribution to ‘Money and Guitars’ which funnily enough references ‘I Want the Moon’ from Leatherfaces’ ‘Mush’ album.

Anyway, bit of a minor digression there, but probably if you’ve been able to bear reading this far, you’ll be aware I have a tendency to do that. So, whilst the aforementioned may wet yer palate somewhat, let’s reference some other stuff. Anybody remember that Hot Water Music and Bitchin’ side-project, Rumbleseat? Released some 7in records and a subsequent discography compilation via No Idea. This record kind of reminds me of a way less stripped back version of Rumbleseat. Anyway, here’s a playlist of the Rumbleseat discography, ‘Is Dead’, because I’m a decent guy or something:

I also find that fellow Canadian John K Samson (The Weakerthans) for some reason springs to mind here. A similar level of melancholia seems to be in evidence. If John gave it a bit of the ol’ wasp gargling vocal, like I feel like we’d be in similar territory. At this point I realise also that I’m rambling on aimlessly without any hope of properly concluding this review. And you probably feel like you’ve been cornered by one of the professional drinkers or other lost souls that habitually haunt your local branch of Wetherspoon’s. I dunno, maybe said individual listens to Yesterday’s Ring? You probably should do, too.