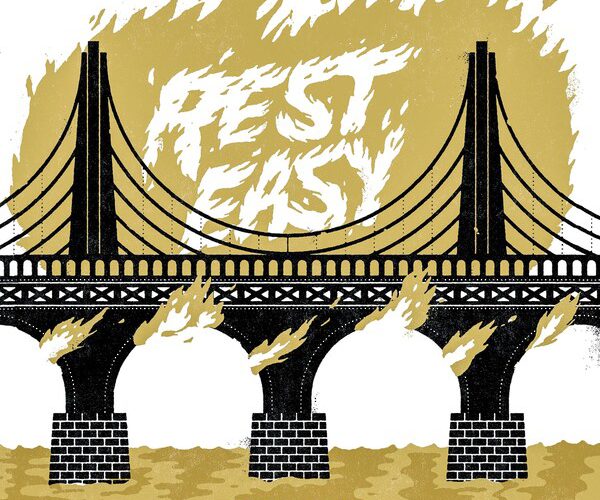 Rest Easy are from Vancouver, Canada. Their line-up is toted as featuring members of Shook Ones and Daggermouth. Once upon a time I was well into the first two LPs by Shook Ones (‘Sixteen’ and ‘Facetious Folly Feat’ respectively). In point of fact, I pushed their shit on a bunch of people that used to shop with me in Roadkill Records. I can also remember seeing them on their first UK tour at The Attic in Manchester with I think Sinking Ships and a local metalcore support that bare dickheads were into that I can’t remember the name of, but a variety of try-hards that didn’t buy records, such as one Mikey Knight were in the band. I have a story about stopping him and his mates from having the absolute bejeezerz stomped out of them by some marauding scallies after Satan’s Hollow one night, but that’s for another time.

Anyway, I didn’t have any loss of love for Shook Ones, I just kind of fell by the wayside at some point. Daggermouth I don’t overly recall beyond a vague awareness that they were probably doing that pop-punk / hardcore crossover thing that was popular for quite a while. Suffice to say that it’s the not the kind of thing I would’ve invested much time (if any) in investigating. Perhaps I need to address this…

Anyways, Shook Ones released ‘Facetious Folly Feat’ in 2006 via Revelation Records, and here we are some 16 years later. I’m a bit fatter, balder, and wizened. These guys look healthy. Absolute bastards.
Weirdly (I actually did a bit of research), Rest Easy have been likened to The Menzingers by one site I won’t name. Thank crivens these guys actually sound fack all like The Menzingers, though.
What you should actually expect is some high octane melodic hardcore along the lines of Kid Dynamite and Lifetime. The guitar lines and drums have that same almost mechanically precise aspect to them. It’s fucking great. The bass lines and breakdowns would be right at home on records by those bands. The vocals also follow these Lifetime / Kid Dynamite-esque patterns, although the vocalist delivers in his own timbre. Normally I’d find myself deeply saddened by such similarities in sound.

However, it’s not the same. It’s not merely imitation, it’s a loving tribute to style that’s really hard to emulate well, let alone put your own stamp on. Remember how rad the first two Saves The Day LPs were, and how they respectively aped but paid all due respect to Lifetime’s ‘Hello Bastards’ and ‘Jersey’s Best Dancers’? I feel like something similar is going on here. This is further embellished by something that puts me in mind of what Rise Against (circa The Unravelling) might have sounded like kicking out 7 Seconds style jams.

This is for sure one of the best melodic hardcore records I’ve heard in years. It’s fast, it’s catchy, it’s anthemic, and it makes motherfuckers want to stage dive across their colleague’s desks to grab a mic that isn’t actually there. Y’know, even though I don’t know the words yet. But yeah, incoherent yelling or some shit. Yeah, this LP is utterly golden, mate.

You can hook this one up in the UK from Banquet Records https://www.banquetrecords.com/rest-easy/hope-you%27re-okay/MLR-REHYO