Celebration Summer are based out of the Northern Virginia suburbs of Washington DC. The band are imminently releasing their debut EP “Against the Gun” via Little Rocket Records on 2nd November. The name Celebration Summer is a mash-up of sorts, and pays homage to the iconic Husker Du song Celebrated Summer and DC hardcore’s culturally significant activist “Revolution Summer” of 1985.

Apathy and Exhaustion have the honour of hosting the European premiere of the lyric video for the first song on their EP, “Bitter End”.

As a potted history of sorts, Celebration Summer started life somewhat inauspiciously as a message board posting in late 2019. Bassist Greg Raelson, sought out members to raise from the dead the style of late 80’s/early 90’s melodic punk rock that he grew up on.

He was subsequently joined by drummer Glenn Boysko and guitarist Dan Hauser, both formerly of the DC band Confidence Man and notable ska side project The Captivators. The trio then went on to recruit relative newcomer Nate Falger to assume the role of singer and second guitarist. 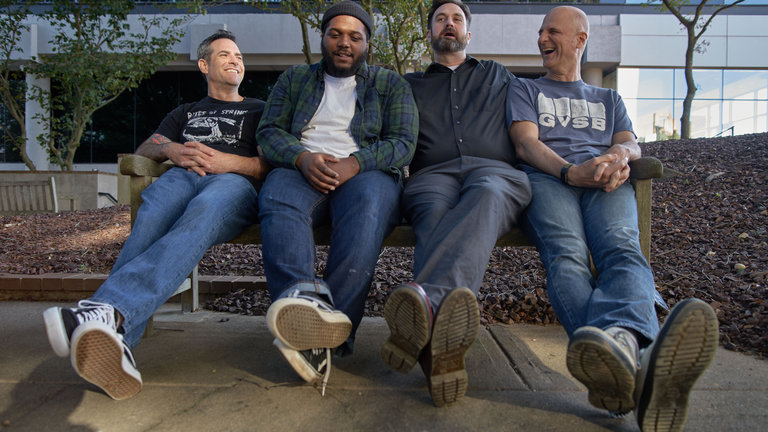 Celebration Summer hit the ground running with anthemic, progressive songs capturing the struggles of modern life in Trump-era America. The pounding rhythm section, which is comprised of Boysko’s intricate drumming and Raelson’s melodic bass serves as a sturdy framework around which Hauser and Falger’s driving guitars and angular structures build a striking audio architecture. This foregrounds Falger’s poignant lyricism, and visceral vocal style.

As previously mentioned, the EP releases on 2nd of November, and is available from Little Rocket Records. This digital only EP is well worth a punt if you swear by the likes of Leatherface, Gunmoll, Samiam and Small Brown Bike, and with any luck will see a physical vinyl release at some stage.