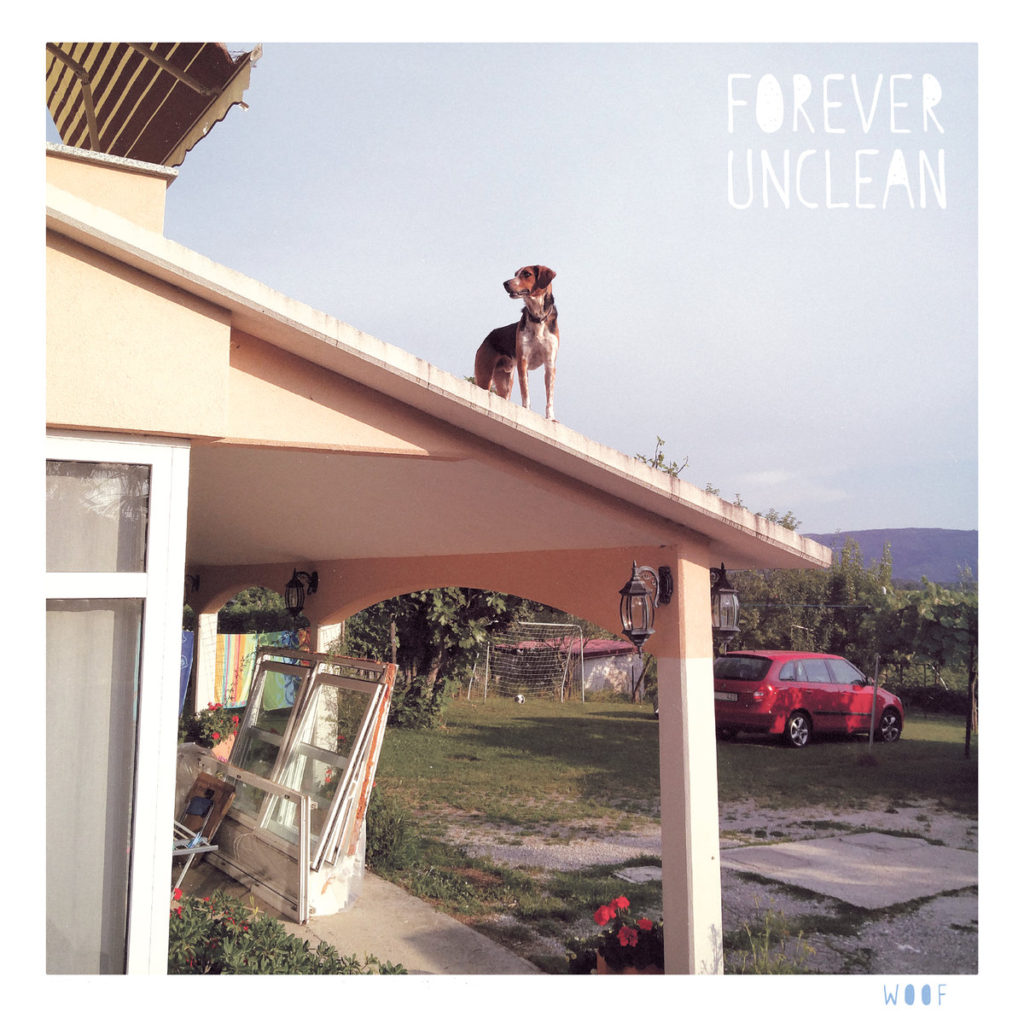 Forever Unclean are a trio from Copenhagen, Denmark. They describe themselves as playing pop / skate / indie punk. From that fairly wide ranging description, admittedly I wasn’t too sure what to expect to be honest. This could sound like literally millions of bands or none. Anyways, Woof is their third EP as far as I can make out.

As ever, I’ll have a blast of anything, me. And I’m glad I took the time to check this out. Weirdly, this sounds like New Found Glory before they got well stale (in like, 2000) mixing it up with Descendents at their pop punkiest. But more than that, it also has an element of the brash bombast of Avail and the vocal has that emotive style of Ari Katz from Lifetime. It also sounds distinctively Scandinavian, for lack of a better descriptive term. I mean, from a punk rock perspective, not a donning corpse paint, burning churches and posing in the forest with a battle axe kind of way.

How can I describe their style? Well, the band themselves, despite giving a rather vague description somehow manage to sum themselves up perfectly. This has been a rather pleasant surprise! This feels like it will appeal to and please both fans of that dreadful easycore stuff as well as fans of “proper” music.

You can get a digital download of Woof for 5 Dicks (or whatever they use for money in Denmark – I’m just being creative with the abbreviation) from the Forever Unclean bandcamp page, where you can also find their previous releases. It can also be purchased on vinyl from:
UK: disconnectdisconnectrecords.bandcamp.com/album/woof
US: hiddenhomerecords.bandcamp.com/album/hhr021-woof
EU: www.beardedpunk.com/pr…/617690-forever-unclean-woof-7
AUS: www.peerecords.com/site/product/pv019/ 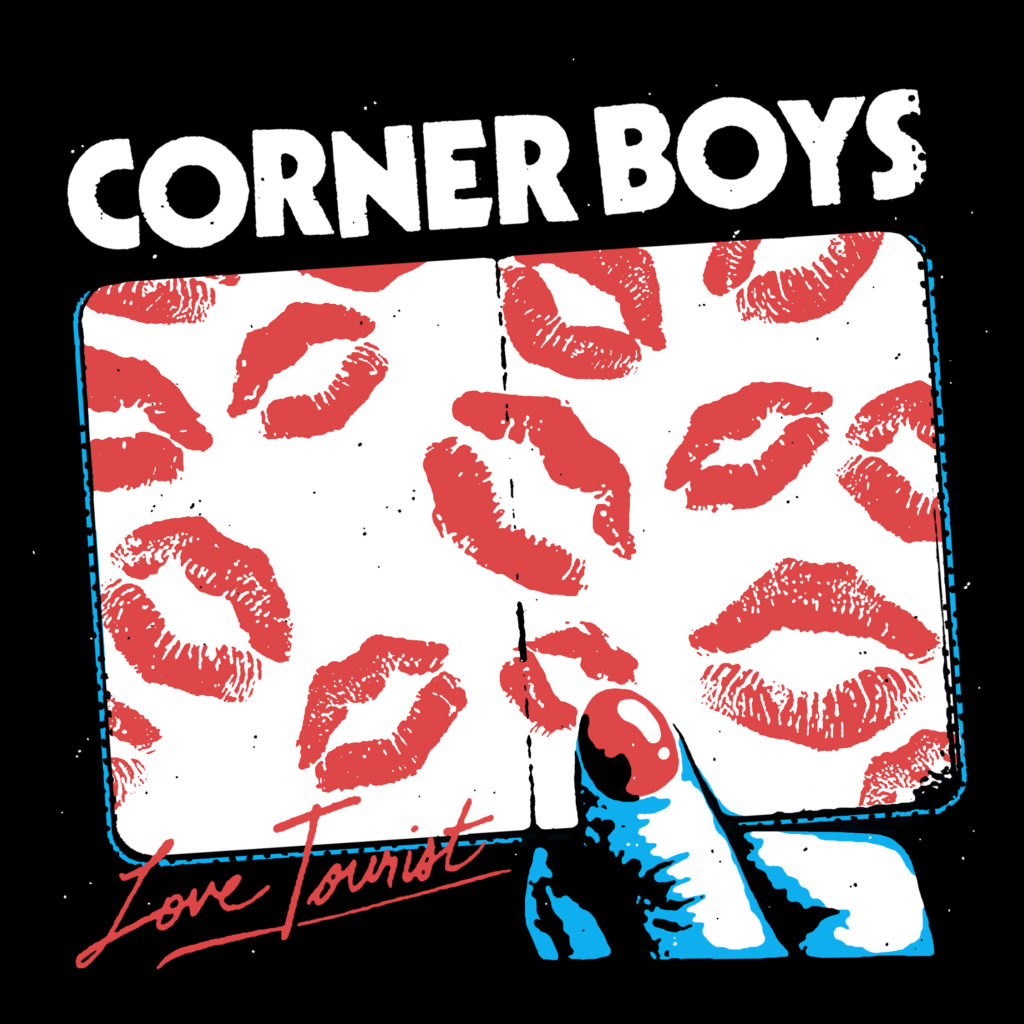 Some of you may remember my review of the Corner Boys’ debut 7in, Just Don’t Care, which came out on Drunken Sailor Records last year. If you don’t remember, take a few minutes to educate yourself – you can thank me later. Given that people are lazy, I’ll give a synopsis of Corner Boys: from Vancouver, play awesome power-pop / garage punk kinda stuff. Their influences can be summed up as late 70s Canadian powerpop and Irish punk from the same period and 60s garage rock.

It’s fair to say that the vibe of this 7in walks a line somewhere between Stiff Little Fingers, The Buzzcocks, and the jangle of Teenage Fan Club. I said in my review of their previous 7in that they seem to have captured that particular sound that inexplicably popular “indie” (cough cough, major label) bands such as The Strokes, The Libertines and The Vaccines are clearly failing to capture, and repeatedly comes out like tinned shit. That opinion still holds, and again, I can only imagine that Corner Boys don’t have an absurd tendency toward over-inflated egos and self-aggrandisement; to me this shines through in the three-way pairing (or should that be combination or triumvirate?) of pop hooks, fun and heartbreak, that without y’know, having one’s feet firmly planted on the ground just ends up feeling preposterously posed and generally unappealing to anyone with a discerning ear. 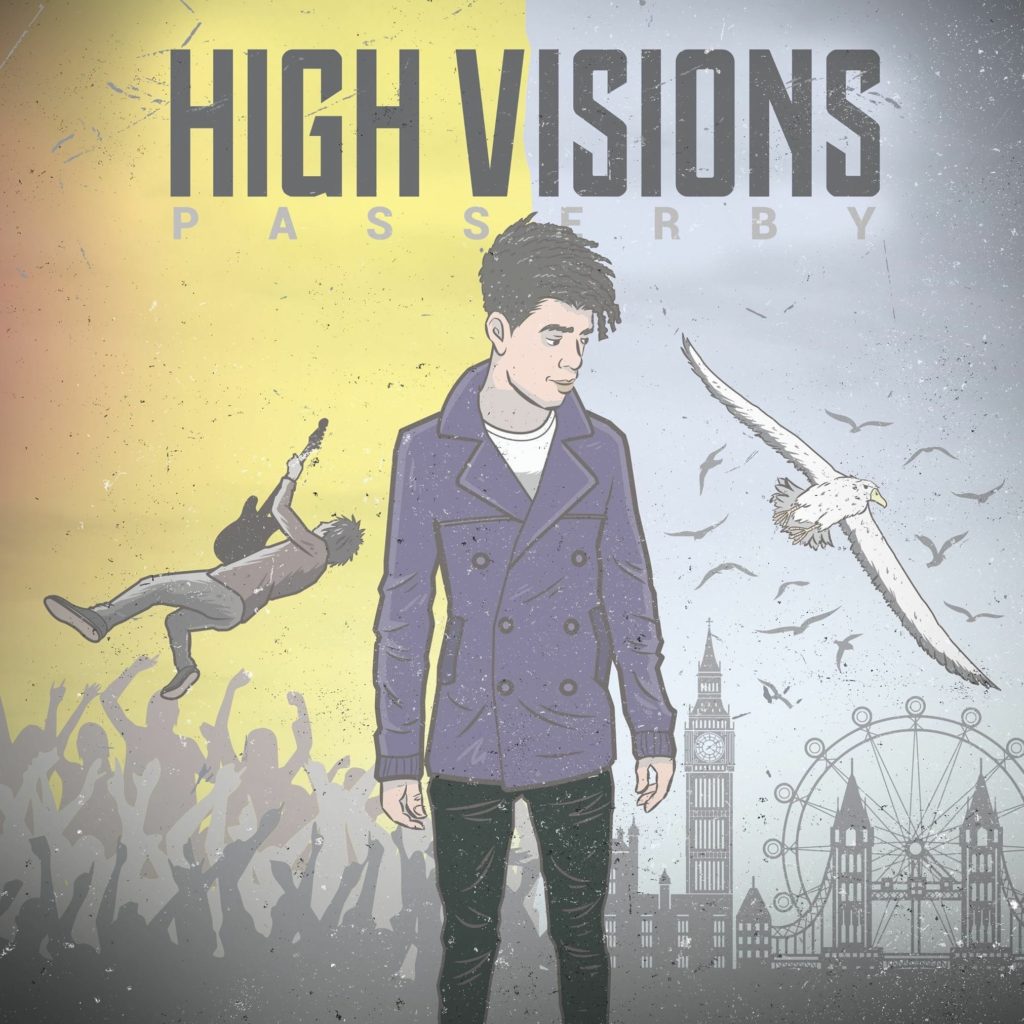 High Visions are a trio formed in 2015 in Leeds, and purportedly play high-octane pop punk, taking influence from the likes of Neck Deep, Trash Boat and “the blistering skate punk of the early 2000s”. That description sounds pretty good to me. Despite never having listened to either Trash Boat or Neck Deep. So I quickly investigated those two bands. Not the worst thing ever, but it definitely feels too young for me.
Now, on to High Visions. Again, the music feels a bit young for me in places. I’m a 41 year old bloke. I can’t relate to people that haven’t been sufficiently ground down by the harsh realities life repeatedly dollops onto one’s doorstep like proverbial turds descending from the heavens. Don’t get me wrong, though – if I was 20 years old, I’d probably be in love with this.

Musically, these guys seem pretty competent. The drummer is fantastic and puts me in mind of that Travis dude from Blink 182, and there’s some great guitar riffs on this record that weirdly seem to sit somewhere between vintage Alkaline Trio and, of all bands, er, Biohazard? Weird. The band seem to play really well together, at least as far as I can tell from this recording. The vocal has me a bit confused, though. Does the singer think he’s Australian? Maybe he is Australian. If he is Australian, I’d prefer it if he sounded like a bogan (the Aussie equivalent of redneck, drives ‘utes’ and drinks Castlemaine 4X), maybe like your man there from The Smith Street Band or the dude from Frenzal Rhomb; not like a seemingly well behaved young man. No offense intended!

The lyrics are dealing with issues and desires such as mental health, abuse, and self-improvement – which is always applaudable when it’s done in a sympathetic manner. I think lyrically, this is an area in which this record maybe feels a bit young for me personally as it can come across as “teenage angsty” in such a way that I can’t really relate it to my own existential angst, but if somebody out there hearing these songs relates to them and it helps – well then that’s all to the good, innit.

I feel like giving this a charitable Tony of Nurgle Rating of 7/10, as I’m in an uncharacteristically good mood.

This one comes out on the 17th August. You can check out Grave Mistake, which is I suppose the lead single from the album on the bandcamp player below:

If you are feelin’ this (as Blink 182 might say), I would assume that you will be able to get Passerby from their bandcamp page at some point in the not too distant future, but there isn’t a preorder there at the moment.