The latest release from French tech-death metallers, The Walking Dead Orchestra, is a re-release of their album “Resurrect”. Most stuff labelled “tech death metal” never really gives me much cause to squeal with childish excitement. But that’s because I’m getting old and more stubborn. Then, if I actually give it a listen, I’m usually pretty impressed, but rarely blown away by any sort of pioneering genius.

At the risk of starting out like a miserable fucker, that’s pretty much the initial impression I got when I first listened to this album. But, the more I’ve listened through it, the more its grown on me and eventually some of its tracks have wheedled their way into my Spotify “playlist yes” (which is, obviously, fucking ace).
There’s plenty to admire about an album, which was has been self-recorded and produced by a band. The album sounds very well balanced from a recording point of view, with none of the depth of the low-end, balls-out chugging lost to poor craftsmanship as is too often the case with music of this ilk.

From a technical point of view, the band are so tight you could skin a fart between their riffs. Guitarists Jean-Baptiste Machon and Kevin Reymond handle the mix of the massive, riffy chops and technical finger work superbly, holding up the bands’ capricious nature while Pierrick Debeaux maintains the seriously unyielding intensity the band clearly love to impose on the listener.

In-line with the skin-tight precision of the band, drummer Cédric Ciulli lays down a healthy mix of rigid, double bass grooves and technical blasting which sets the tone for the entire album. My personal favourite aspect of the album though is the vocals, courtesy of Florian Gatta. Needless to say, the album is full of the typically guttural death metal style rumbles, which is what brings to mind comparison to bands like Job For A Cowboy, but this is nicely offset by some shouty gob action which is seriously reminiscent of Mike Olender of Burnt By The Sun fame and, such as in the case of BBTS, provide a refreshing angle of aggression from a genre of music I often find is much too one dimensional. 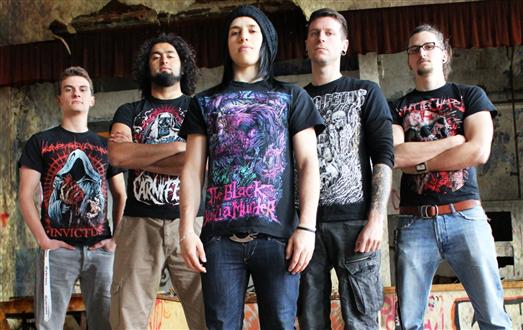 When all is said and done on the album, it’s clear to see how the band have shared the stage with bands like Death (fucking Death mate!), Obituary and Suicide Silence, and I have no doubt they hold their own on this kind of platform. Having recently performed at the hugely iconic Hellfest in their homeland of France, I can only imagine they will continue to press on and become serious high-end acts in a what is becoming a hugely popular sub-genre of metal.

The album can be found online at the likes of Spotify, but go and be a good little person and support your up-and-coming band by finding their album through release label, Unique Leader Records.

You can check the album out on the bandcamp player below: