This has to be the comeback album nobody was expecting to drop in 2018, but I for one am sure as hell glad it has. I’d love to be able to tell you I have a long history of religiously listening to the No Fun At All back catalogue since year dot, but I’ll confess that if I was to do that, it’d be a total lie. 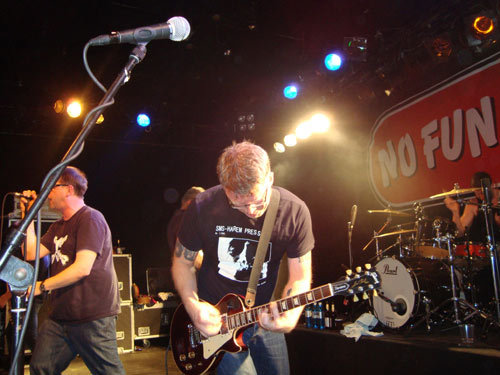 I had of course been aware of the existence of No Fun At All since the mid-late 1990s. I’d heard a few songs (courtesy of the Burning Heart Records Cheap Shots series of compilations) and really liked them. Particularly Catch Me Running Round from the Big Knockover record (Burning Heart, 1997), which is widely held to be their finest moment. That album always used to be on my “to buy” list around ’98 – 2001, but never made the transition into the “purchased” category for one reason or other. Maybe it was because they didn’t play Manchester during that period (if they hit the UK at all in that period – I’m unsure?). Maybe it was my relative lack of funds – I was a student at the time, I was always buying music, and there was always a bounty of overpriced (blame rests squarely at the doors of distributors like Shellshock and Plastic Head for that due to their egregious pricing policies, despite the same releases being cheap as chips in the US for example) Epi-Fat stuff available for purchase at the time. I was often buying skateboard decks though too, and they didn’t come cheap. Plus beer. Plus smokes (thank goodness I managed to quit that fool’s game). Plus existing. You get the picture.

So here we are, a whole chunk of time later, and I’m listening to Grit. And it’s awesome. This is totally recapturing the spirit of those heady days of yore. It makes me feel young; not only that, but like I’m being thrust back into a frame of reference that I can totally relate to. That whole classic Epi-Fat kind of thing is pretty much always going to be my shit, mate.

A lot of those Swedish skate punk bands from back in the day (like Millencolin, Adhesive, Pridebowl and Astream) collectively brought something different to the table: particularly the vocal melodies, backing vocal style (just listen to those vocal harmonies on album closer You’re In Control for example), and what (as a non-musician) I can only broadly refer to as “a different drumming style” which was punctuated (to this idiot’s ears) by break-neck kick drums and sharp, rounded sounding snare licks (I’m unsure if that’s down to production style or how tight they keep the drum skins or what, though). This all seems to be in evidence on Grit, and it’s all to the good.

It blows my mind that this record is so damn captivating and downright enjoyable. I feel like I’m being swept along by a raging current of enthusiasm. You can file this away under the unexpectedly awesome skate punk comeback records section, mate. Right alongside Lagwagon’s Hang. Pretty much any song would be perfect on a skate vid (although the days of VHS tapes in cardboard sleeves are long gone – it’s all done on them shiny circle things they have now innit?). I’d definitely skate to this. My top cuts are probably No Fun Intended (did you spot what they did there?), The Humdrum Way, Simple, Lonely Stranger and Sucker for a Plan, although admittedly, my choices do seem to shift with every listen. As an aside, I am left wondering, following the track that’s been leaked, will Pennywise also manage to pull an unexpectedly good comeback outta the bag later this month? Hmm… at least there isn’t long to wait…

You can check out a selection of cuts from Grit on the player below (I’ll shove the full thing up in the coming days though):

You can also hook this up from the Bird Attack Records bandcamp page on a variety of formats. It looks like the initial vinyl editions may have sold out on pre-order, but if this is repressed on vinyl, I guess this is where you’ll be able to pick it up. The vinyl editions put out by this label always look stunning…