Now this one was always going to be a contentious one.  I have many fond memories of rocking the first full length, Background Music (Reflections / Bridge Nine, 2001) and the Year One  compilation (Reflections / Bridge Nine, 2001).  I still rock Background Music on a pretty regular basis, mate. It still makes me want to shout my internal dissatisfaction, existential disquiet and heartbreak into an uncaring and empty night sky. Legit. And yet, as yer man says, screaming gets you nothing.

But what happened after Background Music?

When they dropped (under the Give Up The Ghost moniker) the pithily titled double entendre courting We’re Down ‘til We’re Underground dropped, the hardcore world was pretty excited. At least until they put the record on. Confusion reigned. I thought at the time that it was absurdly bad – almost that it was a colossal disappointment so huge it required a whole new scale to be created in order to gauge just how terrible it really was. This was something of a widespread opinion as I recall it.  Many to this day deny its very existence.  Revisiting it in 2018 however, objectively speaking, I don’t believe it’s that bad at all.  I think that what people were expecting was the same kind of immediate payoff delivered by the previous releases, but realistically, the reward only came after putting in a bit of listening legwork. Having said this, good as it is, it’s not brilliant though, and it’s unlikely I’d ever choose to slap it on over Background Music. 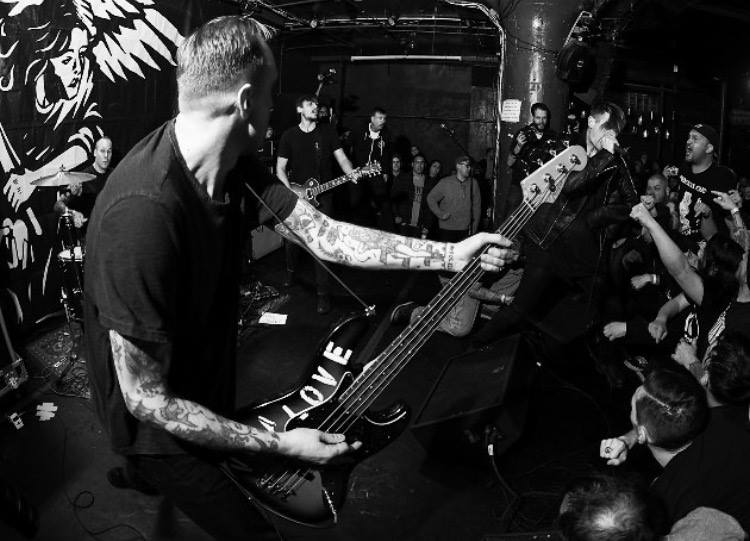 Now, then.  Here we are, in 2018, after an absence of some 15 years from releasing recorded music, it’s with some trepidation that I’m now putting this on. So what gives? Long story short, this self titled record is another one that requires you to put in a little bit of groundwork in order to get the pay off. Read on to see what I thought…

The World is Blue opens proceedings here with a choppy, hard as nails intro, before ripping into some straight ahead hardcore punk… which becomes alarmingly non-linear in the closing moments. Admittedly, on the first couple of listens to this one (the track was shared a few weeks back) I was left scratching my head a bit. I thought no more of it in fact, until the full album dropped into my inbox.  I’m a dad these days, so I’ve little enough time to dedicate to not being in a state of insomnia fuelled confusion without trying to make sense of something such as a track presented out of context, so I suppose I was kinda relieved to hear it more or less made sense alongside second jam, Flowers Under Siege. 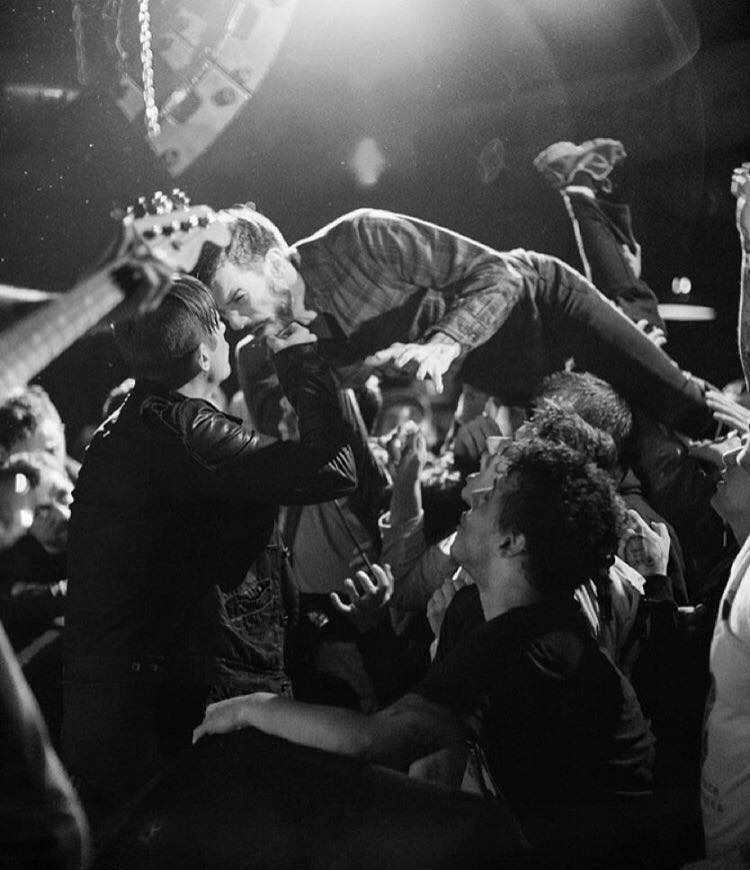 On third track, American Death, it’s becoming apparent to me, that the vocals are ‘cleaner’ than on the previous American Nightmare joints. Wesley Eisold seemingly now howls rather than, er… growls?  Weirdly, it kinda works for me though, and the vocal carries a plaintive desperation that I can totally get on board with. American Death thus forms a pleasingly aggro coupling with War. The latter track adding something of a sub-textual horror punk goes hardcore (idea for one of them utterly garbage ‘themed’ compilation CDs ala punk goes cock rock or whatever right there) vibe that put me in mind of the Nerve Agents meets Modern Life is War meets Black Sails in the Sunset era AFI, despite not sounding anything like this would probably sound. Despite the fact I’ve just churned out a line of nonsense, somebody should probably rock a band that sounds exactly like that description, though. I bet it’d be fucking boss.

Things take another interesting turn on fifth track Gloom Forever, both continuing the theme laid out in War, but also starting to point more decisively back toward the classic American Nightmare sound of 2001.  It seems to pave the way for Lower Than Life which I feel is going to fill the void that We’re Down ‘til We’re Underground left for a lot of people, especially the transcendent, slowed down faux-mosh part. 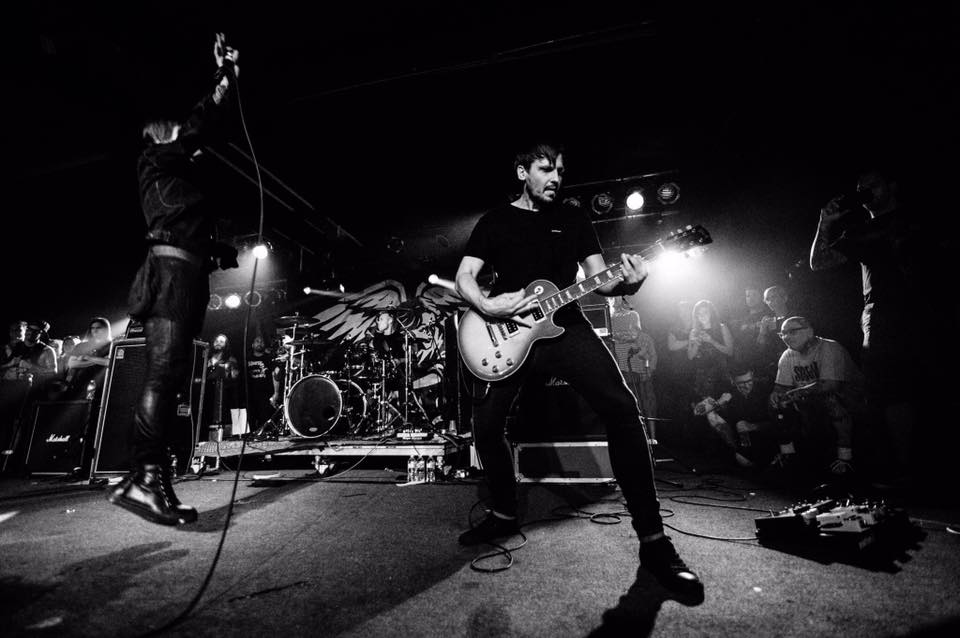 Admittedly, the first couple of times I heard Colder Than Death, I nearly pissed out laughing at the weird Adam Ant meets Billy Idol style chanting when it breaks in, but the track itself ultimately makes sense. Again it’s evoking that weird horror punk ethos, only this time with an overt new wave / post punk kind of slant.

The closing couple of tracks, give us another odd juxtaposition of sounds.  Eighth track Dream is a punishingly refreshing 36 seconds of early Black Flag ala Fix Me. Crisis of Faith on the other hand is to my ears something of a tribute to Joy Division, that put me in mind of that cover version of Insight that appears on Nobody Laughs Anymore by fellow Bostonians, The Trouble (Bridge Nine, 2005).

As I was saying (or attempting to) above, I can totally see people not initially “getting” what’s going on here. Background Music it’s not. If you are after the relentlessly aggressive hardcore punk of that record, you’ll want to check out the latest record from Giver, Where The Cycle Breaks. Whatever slow evolution American Nightmare have undergone in the seemingly interminable 15 year period between records still leaves them recognisably  American Nightmare, but it’s a somewhat different sounding beast. This is probably due to the unavoidable hallmarks of some of Eisold’s more recent work (such as Cold Cave and XO Skeletons for example) leaving some kind of residual stamp on this new work.  Ultimately I think people will dig it, though. Despite the lack of overt classic mosh parts that make you want to snap so many dickheads in twain, I feel surprised and oddly elated to be able to give this a Tony of Nurgle rating of 9/10.

Now, as an aside, there’s something I take a bit of an issue with. Fuck off with them ticket prices mate. I realise that Wesley Eisold likes to dress like a cross between Lord Byron, Aleister Crowley and a necromancer these days, but he can fuck off if he thinks I’m funding his wardrobe choices.  I can remember putting on Some Girls back in the day with Liam and they drew a staggeringly small crowd, considering it was only 5 or 6 brick to get in. But nowadays? £25 or more to watch a hardcore punk band? Get the fuck out of here with that nonsense, mate.  I don’t begrudge these lads making a living, but some unholy amount of piss is being taken with that price tag. Musically speaking though, American Nightmare, you’ve got to know you (still) have my heart.