This was my first exposure to Deep Pockets, with their EP Nice Life released on Dead Broke Rekerds (http://deadbrokerecords.com/contact.php), released earlier this 2016 year. It will not be the last. Growing up on Long Island and sticking close to make music out of NY, these guys are described as post-hardcore. I think that fits. Loud and angsty would also work. This EP is a follow up to 2013s full length LP You Feel Shame, and I would love to know what took them so long. If this album is anything to go by, they are mighty. I have read reports of fantastic live shows and I imagine that these reports are justified. 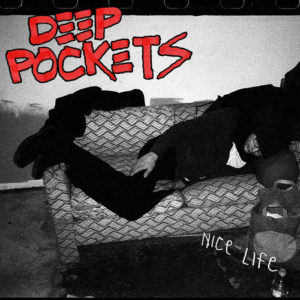 I dig a good deep bass line opener followed by growling vocals, and that is exactly where we start with this EP. It is fair to say it does not let up. The album fills a hole for me left mostly by Arcwelder who, if you don’t know, then you are missing out. Generally I scratch the itch with The Bronx, but it is great to discover another band to add to my arsenal. More bands, more output and more bands to miss live: I have never seen The Bronx live, and it seems Deep Pockets are mostly a band local to NY for now. I did manage to catch Arcwelder reunite at an ATP festival and they were mighty. So yes, fingers crossed this band grow enough for me to at least have a chance of seeing them playing live. Either that or this magazine needs to make a tonne of money so I can go see them play in NY… (er… realistically, that’s not going to happen! – Tony of Nurgle)

The lovely thing about this EP is that each song holds its own. There is nothing on here that make me want to reach over and press the skip button. I think it is fair to say that the noisy ‘edge’ (the vocals and the pace maybe?) quietens as the EP develops but it is a slow, gradual reduction of the ‘loud’; neither jarring nor a bad thing. Indeed, as the record develops the cutting guitars and drums are given larger platform to shine. The quality of this band is in the nice, clean sound that comes with the loud, reminiscent of bands like Fugazi and Shellac. Indeed, singer Matt has a vocal style similar to Steve Albini; somewhere between singing and a slightly restrained yell into the microphone. This, for me, is nothing but a good thing.

Between cracking vocals and thoroughly fun music, I think it is fair to say that this EP will be getting a lot of play time for me. A stand out track – honestly I cannot pick one. Every song has equal appeal right now. I hope this band gets some recognition – they deserve it.

Buy it from Dead Broke here