The Queens EP follows an album released earlier in the year. One which makes me rather cross to be honest. Because, whilst I have not heard it, all I have read about this EP is that their last LP was produced by Ryan Adams. Come on, you lazy music press – review the damn EP, don’t bang on about what came before. It is almost like this EP only has merit because of the last albums’ producer and that is a crap stance. It is a good listen. It is worthy on its own merit. 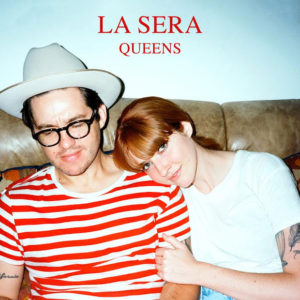 Writing here allows me the chance to listen to bands that are new to me and so far this year I have found some belters. I had lulled a little bit since I left my previous home city of Zurich, where the best record shop in the WORLD is located, Jamarico & Jama Music. I used to pop by on a semi-regular (ahem) basis and be handed over a stack of vinyl with a cup of coffee and spend a few hours discovering new bands. There was one very important rule they had in there, they would only give me records that they deemed ‘good quality’ records. Sure, they stocked the usual stuff but customers like me (with a permanent 10% discount) were given the good stuff. These guys knew their music and I missed them when I left Switzerland.

OK, prattle aside, I bring this up as La Sera are most likely a band that I would have been given to listen to in Jama. Good quality music with a country edge will no doubt have made the staff there very excited. There is also a good chance that the band would have had their part in making my purse a significantly lighter.
The EP starts with a highly polished, poppy alt-country tune Queens that I am enjoying more with each listen. Kinda like they Dum Dum Girls, I could easily imagine hearing it on the radio if I ever listened to one. It has an easy flow with nice jangly guitar. The alternation of male and vocals works well, with both complimenting each other. Actually, I think it would be a great song to get ready to in the morning – I do like a little dance in the morning although I do often burn my fingers in my hair-straightners when I do that…

Magic in Your Eyes reduces the pace somewhat, becoming more of a indie tune with a more traditional country vibe going on. Admittedly, I am not sure how often I will find myself wanting to pop this on the stereo, but I won’t turn it off when it comes up. It’s certainly better than the Dixie Chicks by a mile.
The surprise hit for me is Shadow of Your Love (video above!). This starts out as a darker country ballad, but in the vein maybe of the amazing Grim Tower (please, please, please make a second album GT!). However, midway through someone cracks out and cranks up the guitars, with screeches and squeals that sound like they are barely contained and could shake loose of the tune at any moment. Ok, I LOVE this. I won’t say that I have not heard similar things before but I fall for it every time. The vocals stop and the song is consumed by a lead guitar the screams to be heard. Seriously, it is hard to believe that it is the same song. Fantastic.

The earlier polished composition of Queens is repeated here on I Really Need an Angel. That said, it is less jangly, well, apart from the bridges, and I think this tune edges it in terms of enjoyability for me. As with the last song, there is a break out of loud fuzzy guitars towards the end of the track and again I find myself happy that it does.

The EP ends with a cover of Whole Lotta Love. I’ll be honest, it isn’t that amazing – I would much rather listen to the original Led Zep. I don’t think this needs to be on here – sure it may be a live favourite of the crowd but tracks 3 and 4 on here, songs written by the band themselves, are far superior.
So there you have it. A great EP. Songs 1 & 2 I can take or leave but it shines brightly with the latter tracks (cover aside). Well worth a listen if you’re an alt-country fan. It’s no Black Belles, but if they carry on as they finish this EP they could well become so.