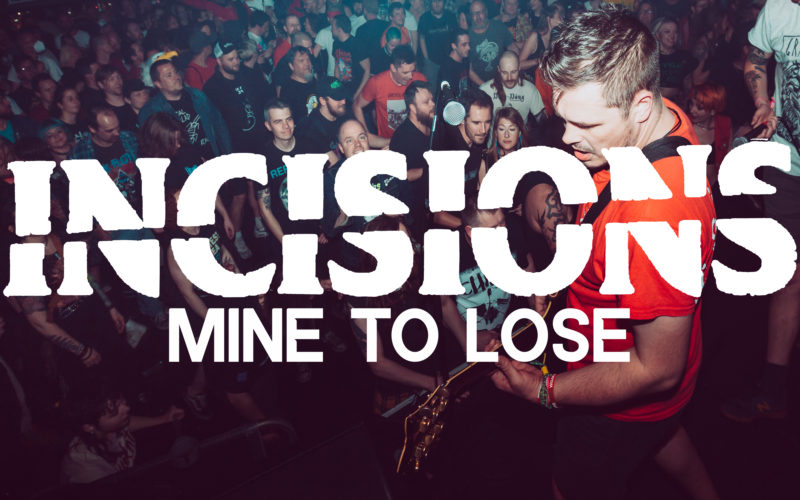 Seemingly not content with having unleashed a second LP (Bliss) of furious hardcore punk upon the unsuspecting (or totally suspecting depending on how clued in you are), Manchester ensemble Incisions are seemingly embarking upon a voyage of epic (or short and sharp) proportions to release a series of one-off tracks into the wild…

Mine to Lose is the second in this series, and follows on from Gasoline, which was released digitally on the 5th April 2022. Where Gasoline is firmly jacked into the vein of venemous ’80s uS hardcore punk, latest offering Mine to Lose shows the band pushing the envelope in a bit of a different direction, whilst still staying true to their musical roots. Hit play:

Mine To Lose investigates the idea of plumbing the depths of regret viewed through the lens of the pain of losing yourself to your vices. Which is something I’m sure more than just a few of you can relate to.

There has been a recent change in the band dynamic along the way, with vocalist / guitarist Jordan dropping the guitar to focus purely on vocals. This has allowed the band to up the ante on their already rowdy gigs even further, with each member gaining renewed focus on their respective roles: Martin (guitar / vocals); Ken (bass / vocals); and Tet (drums). Having seen the band most recently (for me) on their tour with Grand Collapse (RIP Calvin) at Mabgate Bleach in Leeds in September last year, yeah, it’s pretty exciting stuff, even though I’m now pushing 45.

Where the Negative Approach / Poison Idea / Black Flag influences have been toned down, it naturally makes room for other influences to come to the fore. What particularly leapt out at me was that this song seems to scream “John Reis” at me. If you start to think along the lines of John’s history of game-changing bands (Drive Like Jehu, Rocket From The Crypt, Hot Snakes etc.) you can really begin to appreciate this paradigm shift fully.

Mine to Lose is released digitally on bandcamp today and is available to stream on all major platforms.

You can obtain physical releases of Incisions records (and many others) from the TNS Records webstore, or go to a gig and buy some shiz in person.