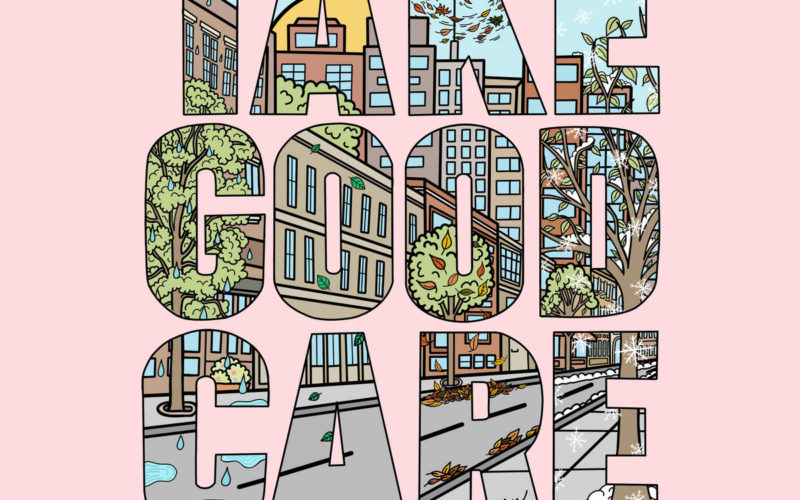 Among Legends are a 5-piece from Ontario, Canada and have been self-releasing EPs since about 2016. They have just released a new video / single, ‘Come Up Swinging’, which is lifted from their forthcoming new LP, ‘Take Good Care’. The LP will be released on 8th July 2022 by our friends at Little Rocket Records (UK), Rad Girlfriend Records (US), Sounds of Subterrannia (EU), and direct from the band in Canada (please see below for pre-order links).

Obviously, as this bunch of worthies are under the mistaken impression that I’m a cool guy that people pay attention to, I’ve been sent the LP super-early. Before we get to that, you should take a look at the viedo below for lead single, ‘Come Up Swinging’.

Graeme at Little Rocket was a tad concerned that this might be a touch on the pop side of things for my personal tastes, however, he (and you) can be reassured that my main take-away from this song is that it has very much got a vibe heavily reminiscent of the poppier moments of the ‘Everything Sucks’ and ‘Cool to Be You’ LPs by punk rock lifers, Descendents (1996, Epitaph Records / 2004, Fat Wreck Chords respectively). Obviously, I’m totally down with this as I love the Descendents, innit.

Vocalist Mitchell Buchanan says, “Come Up Swinging is all about pushing through internal adversity, overcoming that voice in your head that says “you can’t do this,” I wrote the lyrics as an exercise in trying to create something tangible that could counteract that voice in my own head – some sort of evidence that I could turn to when I was feeling overwhelmed or directionless. Over the past few years it’s become a personal pump-up song, and I hope it helps someone else hold onto the drive they have to achieve what they want to achieve. We’ve all got the capability to do amazing things, and Come Up Swinging is a song that’s meant to encourage folks to keep going, even when it’s really hard, to actualize the amazing things we can all do.”

So let’s get a rough overview of the rest of the record, then.

I suppose to break things down into easily digestible “will I like this” terms, older readers that were into the 1990s “Epi-Fat” kind of sound are going to get a fair amount from this release: musically, think along the lines of No Use For A Name‘s holy trinity of boss level awesomeness (Daily Grind / iLeche con Carne! / Making Friends). Vocally think somewhere on the lines of Scott Radinsky from Pulley meets John K Samson (second vocals on earlier Propagandhi releases, then fronted The Weakerthans before embarking onto the solo stuff kind of boat).

For the benefit of younger listeners (who are probably also getting on a bit now), you’ll probably note similarities to Swan Prince and The Raging Nathans in places, not to mention the melodic punk of bands like The Exquisites, Signals Midwest and Great Apes as points of reference here, perhaps with a bit of Take This to Your Grave (in the grand scheme of things, that album isn’t bad in the context of what else was popular at the time; it wasn’t for me, granted, but y’know) era Fall Out Boy coming through in a way that may open this band up to more mainstream audiences.

Anway, now I’m done with spuriously categorising people’s listening habits based on age in such a way that somebody somewhere will take offense – because yeah, I have been somewhat patronising about Fall Out Boy; wouldn’t YOU jack in moderating the Earth Crisis web forum in order to earn a fuckload of cash peddling mediocre shite to 13 year olds? – I’ll say that I’ve rather been enjoying listening to this record.

This is available on both mystery colour vinyl (every one is unique) and classic black.