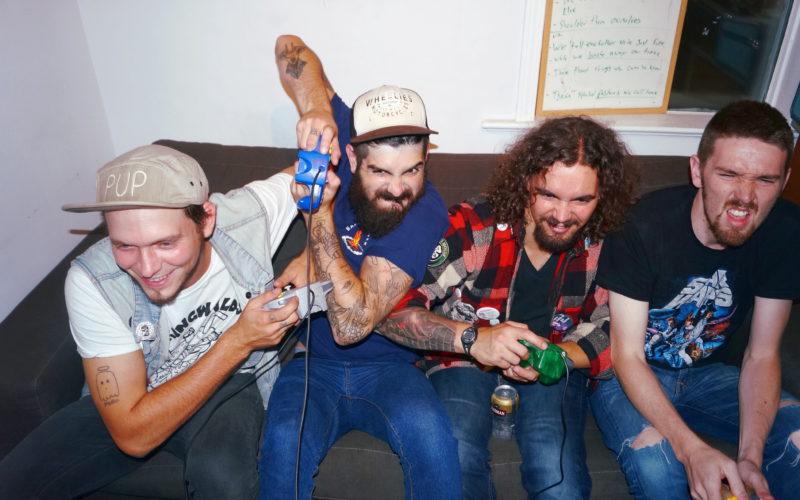 The internet had suspicions that it had seen the last of the Apathy & Exhaustion blog, but some motherfuckers (like my good self) exist purely to disappoint the global public. I’m sure I’ll spill details of my extended absence at some point, but enough about me.

Here we are with the first premiere in a little while, the track being ‘Bitter’ and the band being Screaming at Traffic. Some of you may recall the band Screaming at Traffic and their debut full length outting, I Don’t Like Sports which came out on Little Rocket Records in 2019. If you don’t, I can only advise you to go and correct that terrible oversight immediately after checking this video out.

For the benefit of the unfamiliar, Screaming at Traffic are a punk rock band from Winnipeg (Manitoba, Canada – home of The Weakerthans and Propagandhi) made up of Jacques Richer, Duncan Murta, Paul Colman, and Stefan St. Godard. I suppose in a manner by now not unfamiliar, the global pandemic put paid to their plans, much as it did for many bands out there. I suppose it doesn’t matter how much acclaim you rack up if your potentially meteoric rise is curtailled so abruptly. Damn. Think on the lines of Iron Chic meets Samiam: you’ll not go far wrong with this blend of emotive melodic punk and indie rock. Top notch, mate.

Jacques Richer said of the video: “Last year we were feeling kind of defeated like everyone else. Tours were getting cancelled, we had no idea when we were going to be able to get back on the road, and we were all stuck at home. For a brief window in the fall of the pandemic we were able to meet up again and start practicing, and we started joking about how it felt like putting the old team back together, like in all those cheesy 80’s tropes, then… BAM! the idea for the video sprung to life. We decided to lean into the weird humour of it, cause what the hell else are you gonna do? So, we decided to put together a video for ‘Bitter’, a song from our album. ‘I Don’t Like Sports’.”

As you can see, these lads have not been at all deterred and are all set to come right back at the world with this promotional effort for the forthcoming tour…

That’s not all, though. Screaming at Traffic are busy recording their as-yet-to-be-named second album. This will be co-released by Little Rocket Records and other blog favourite, Radgirlfriend Records. In order to refresh memories, and tickle the fancy of new listeners in preparation for this release, I’ll share the last album with you again. You cheeky bastards better not say I don’t put in the leg work so you don’t have to, innit. Literally all you need to do is press play:

Buy the LP on vinyl from the Little Rocket Records bandcamp page for a bargainous £11.99.