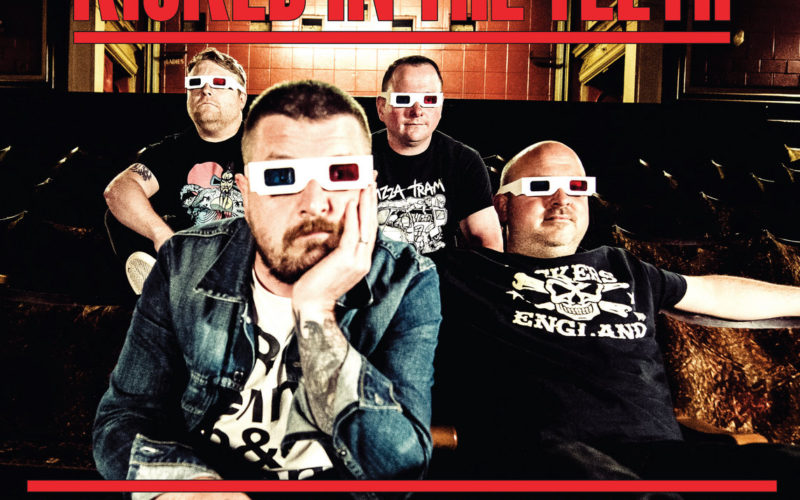 Northwich. Once an unassuming town in the wilds of Cheshire is now seemingly becoming something of a pit-stop on the UK punk rock circuit. This seems to be largely thanks to the efforts of one Chris Mundie, who has opened a pub / venue called The Salty Dog. If you don’t know, Chris drummed for The Business for many years until they called it a day. But it’s not all changing barrels and pulling pints. As well as occasionally penning reviews for this site from atop an exercise bike (yes, really) Chris (and friends) formed Kicked in the Teeth a few years back.

The band seem to be going from strength to strength, having clocked up an impressive amount of releases in a relatively short time, including two full length albums via local DIY label Rare Vitamin Records. This one, Salt Rocket to Nowhere being the second. Far from being the “difficult” second album, Salt Rocket to Nowhere sees the band levelling up from their already more than competent prior releases. Everything here feels that little bit tighter, that little bit more confident, that little bit slicker.

I’ve doubtless said it before about many bands, but yeah, Kicked in the Teeth aren’t reinventing the wheel. They don’t need to be: we’re talking straight up, Oi! Influenced hardcore punk. The entire point here goes beyond being no frills. Yep, it’s not fancy, and it’s not pretty. It doesn’t need to be.

What this record manages to do is showcase that the musicians here can play their instruments properly, and that they write songs together really fucking well. There’s nowt wrong with kicking against the pricks; in fact I’m all for it. What other bands would benefit from knowing is that nobody wants to listen to you doing it if you’re a bit shit. Nothing wrong with being a meat n’ spuds hardcore punk band if you do it well.

Kicked in the Teeth, however, are certainly not shit. Far from it. They are possessed of an intelligent yet belligerent form of focused dynamism. They don’t so much pack a punch, as they give you a serious beating, and then ride back and forth across you all rough-shod like for good measure. Oddly though, if you are anything like me, you’ll find yourself thanking them for it.
Recommended for fans of Agnostic Front, The Flex, The Chisel, and people that don’t find Chubby and the Gang aggro enough.