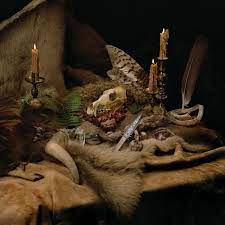 Cascadian black metal OGs, Wolves in the Throne Room, are back after a four year break with their seventh album, Primordial Arcana. This also marks their first release under lovers of all things extreme, Relapse Records (with Century Media handling things outside of the US), having previously been with both Southern Lord and Artemesia. On top of that, this is also the first time that the band have handled the recording, producing and mixing duties. All done during the pandemic at their Owl Lodge Studios, tucked away in the woods of the Pacific North West.

The album opens in typical WITTR style, with the thunderous “Mountain Magick”. It’s full of big drums and ends with a truly epic solo. It also heralds the increased use of growls in the album, which complement frontman Nathan Weaver’s bestial screams nicely. Follow up “Spirit of Lightning” slows things down a notch, with hammered dulcimers (yeah, the thing Botanist love) and ethereal sweeps of synth. The band bring in some Viking/Germanic influences with the occasional chants and war horns, with stand out track “Primal Chasm (The Gift of Fire)” using the horn as a call to arms before kicking into a nasty mid-paced stomp. The band also balances their PNW brand of black metal with Wardruna worship in “Underworld Aurora”, full of tribal drums and raven calls. Single “Masters of Rain and Storm” embraces the bands more epic tendencies, adding death doom and crust elements into the mix. There’s also an acoustic interlude, which makes for a nice bit of respite.

This is probably WITTR’s cleanest sounding record, which is surprising considering that the band did everything themselves. It’s also not a bad thing, despite what certain purists will say, as it really showcases the band’s talent and lends some extra gravitas to the vocals. The whole album manages to sound heavy throughout, even the occasional stray into dungeon-synth territory, without being as bludgeoning as something by the likes of Portal or Revenge.

Primordial Arcana is a legit banger for black metal fans and a great introduction to the band for new listeners. While it may not be the most original album the band has released, it most certainly ticks all the boxes for what you would want out of a black metal record (bar maybe sounding like it was recorded in a dustbin, which some purists love). If you want blastbeats, buzzsaw guitars and the odd epic moment, you won’t go wrong with this album.