To avoid confusion, before we actually get started, this is a review of the new anthology of writings from Tim Cundle, with illustrations by Rachel Evans. The volume collects short stories, essays and autobiographical accounts of the author. Apathy and Exhaustion are credited on the back jacket with a quote relating to What Would Gary Gygax Do? the short story, previously reviewed on this site by one Nathan Bean back in 2017, who incidentally wrote the foreword for this anthology. And I also appear in the thanks list. So, no, you are not trapped in some kind of time vortex or alternative reality where the concept of time is entirely fluid. All is well, and as is often said of the hardcore punk scene, it’s clearly an incestuous affair.

Even though the internet is shit, which might seem like a weird thing for a guy that runs a website to say, it has afforded me the opportunity to connect with some great people that I’ve not met in “real life”, but that I can call “my internet friends”. Although I’m admittedly being a bit glib, I am eternally grateful for that, and for the physical copy of this book that found it’s way into my hands.

This book reaffirms that it’s OK to have grown up as a bit of a reject, for want of a better expression. The chances are that if you end up picking this tome up, then you are going to relate to it to a greater or lesser degree. Whether mainstream society rejected you because you didn’t fit in, or you opted out (without necessarily buying in) of that world because you could see the intrinsic unfairness of whatever system or systems that guide and govern wider society – somehow you ended up out of step with the world. There’s something about lack of social status in your formative years that steers you into alternative subcultures and/or “nerd culture”. If that doesn’t ring true then you’re either incredibly priviliged or some kind of fucking poser that talks the talk but inevitably can’t walk the walk. 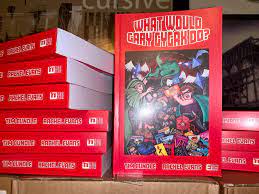 These clipped and concise little vignettes could often be a warped reflection of my own formative experiences. Sometimes there’s a world of difference, and yet there’s some kind of instinctual or subconscious connection that comes to the fore and lends creedence and legitimacy to the subject matter at hand: growing up working class; unrequited love; self-castigation and recrimination of shoulda woulda coulda scenarios; the visceral thrill and wonder of finding your place amongst the other downtrodden misfits and outcasts serving their life sentences on outskirts of their sick, twisted fucking society (or some other poignant snippet paraphrased from White Trash Rob).

Yep. This one’s for us. View it as gospel truth. View it as alcohol abetted embellishments and exagerations of what really went down. View it as romanticised versions of what the author might like to think they’d do or say in the case of the fictional pieces. It’s not always clear which of the categories certain of these writings fall into. And trying to figure that out is part of what makes this such an enthralling read. Whether the yarns spun in this tome are based in fact, fiction or a blend of both, the man tells a decent story, and much like the punk rock songs yer man there loves, none of them overstays their welcome; economical use of prose is the order of the day, and each piece of writing is easily digestible. One “bonus” thing I’d take away from this is that Tim seems socially well-adjusted enough to have an outlook, that although historically seated in bitterness, has turned to one of acceptance. Maybe there’s hope for me yet, then?

You can pick this volume up direct from Earth Island Books