Dunno how shit is shaking out in your particular corners of the globe, dear readers, but the UK is a bit of a shit-show at the moment: shitty government making shitty decisions weeks too late, resulting in the country topping the leaderboard for most total deaths from Covid 19, despite the virus reaching our shores relatively late on into the pandemic. But at least the bumbling buffoon that we have for a national leader didn’t boast about shaking hands with Covid patients and then end up in INTENSIVE FUCKING CARE WITH COVID, right?!? Nope. Of course he did. Top all that off with extreme levels of idiocy/ignorance from the general public and whaddaya know?

Anyway. I’ve been going stir-crazy over here at Of Nurgle Towers. My dear lady and I are both attempting to work from home whilst trying to wrangle a willful almost 3 year-old who has no capacity to understand what the hell is going on in the world out there, beyond the poor scamp knowing he can’t go to the playground because it (and everything else of interest to little kids) is closed. Got so much on our collective plate that there barely seems time to do anything else at all, let alone listen to records or even consider writing about them.

Beyond this I’ve been attempting to shake off pre-existing despondency and lack of general creative drive. I was hoping that this global crisis might give me a kick up the fucking arse in the creativity stakes, but no fucker on my road has shaved their hair into a mohican, started dressing like Judas Priest or welding massive spikes to their car, so it’s fair to say inspiration has been in short supply. This apocalypse is a bit of a let down to be honest; chiefly because it’s so jeffing dull… 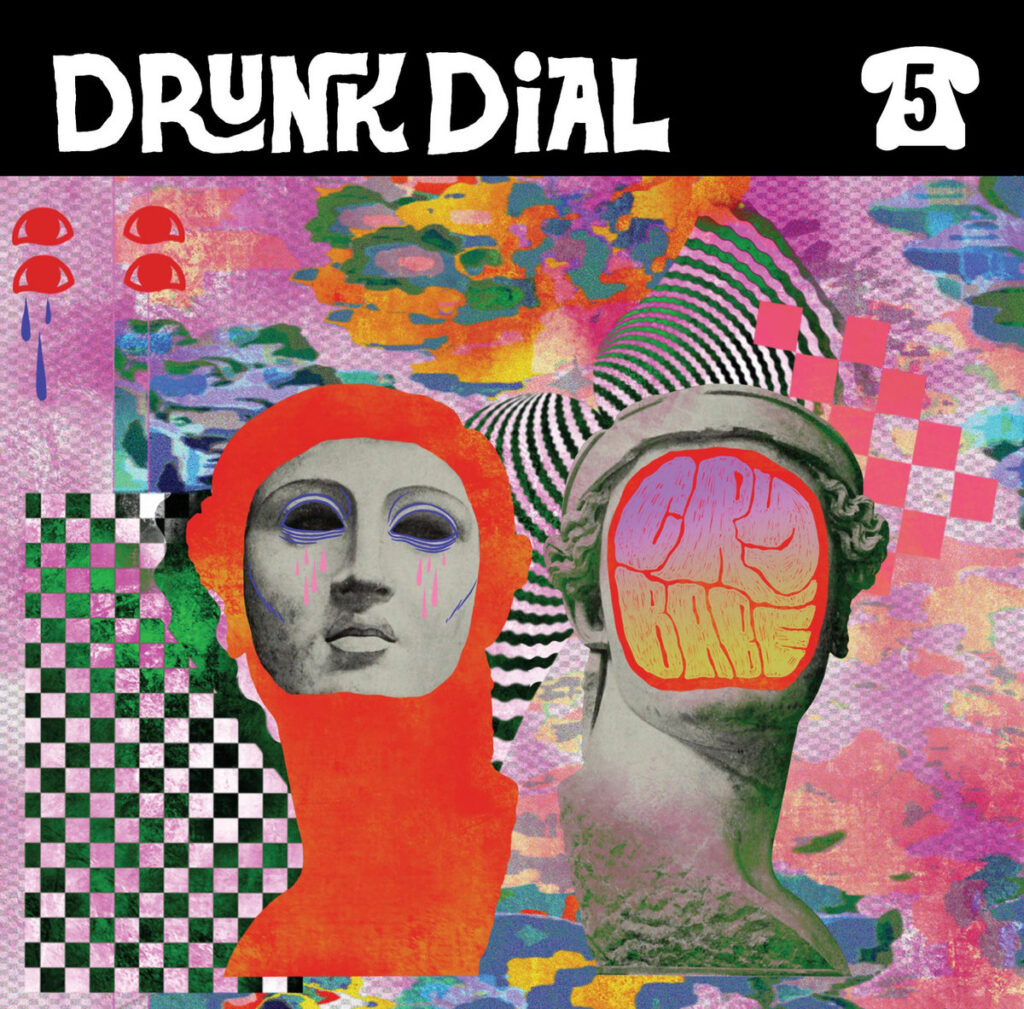 So then, Cry Babe are something of a local favourite in Portland, Oregon, the town in which Drunk Dial is based. Obviously I’ve never heard of them, as I traded in my very limited supply of street cred many years ago in favour of leaving the house as little as humanly possible and drinking a variety of fine beer. What’s not to like about such a lifestyle? Asides from the additional weight gain that has been brought about through general indolence of course, well, I dunno.

The lead track here is called A Romance of Many Dimensions. I guess I’d kind of describe this as some kind of funereal female vocal led lo-fi shoegaze. I guess if you can imagine something between Slowdive and Darklands era Jesus and Mary Chain with a particularly unsettling undercurrent of Pissed Jeans, then you’ll probably be in the right ballpark. And there’s some mournful spectral moaning and wailing going on in the background, too. I found it to be both sinister and gratifying. What that says about my personality or general frame of mind, I have no clue, mate. 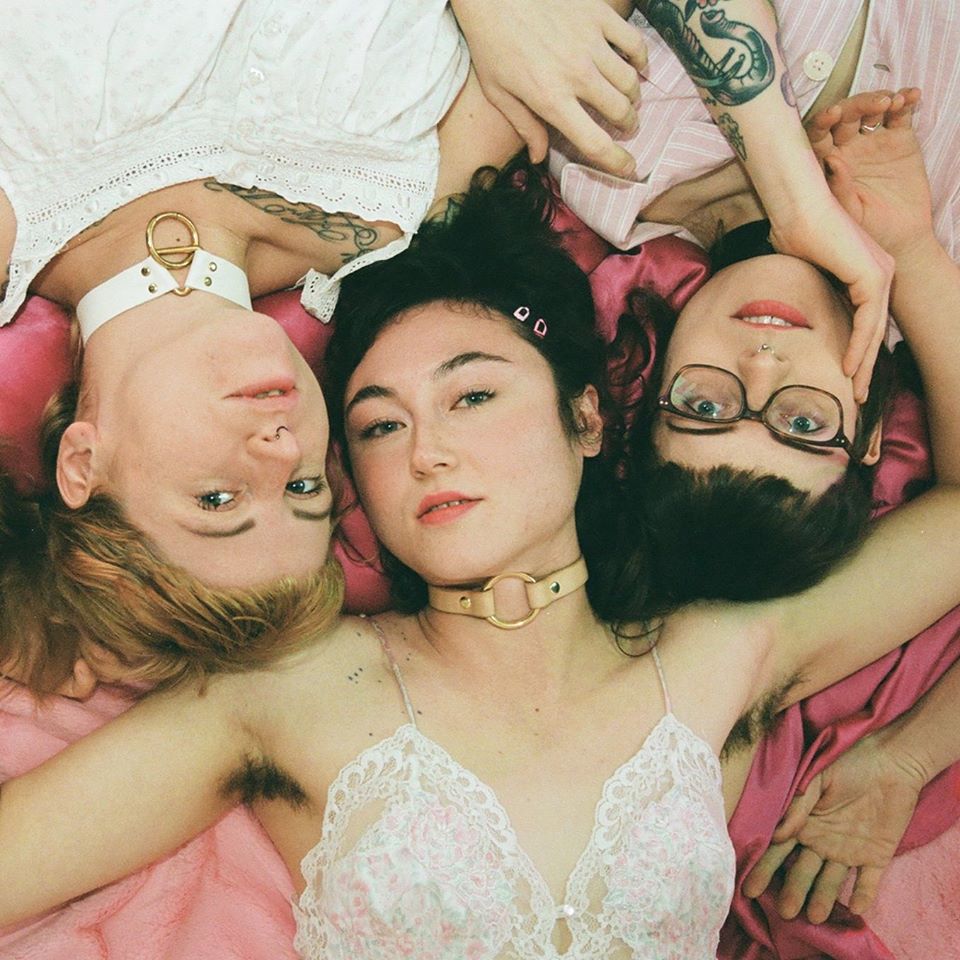 On the flip, as is tradition with Drunk Dial releases, is a cover. Cry Babe have opted for classic Hole single Violet from the seminal Live Through This album. I love that album, me. Even though it’s really not a cool thing to admit, me not being a teenage girl in the mid-1990s and in actual fact being what amounts to a slob with an impending midlife crisis on the horizon. But yeah, a suitably morose and low key homage is made here. It’s got a real Siouxsie & The Banshees rising up from the depths of a longterm herion coma kinda vibe going on.

I basically love everything about this. Tony of Nurgle rating: 9/10 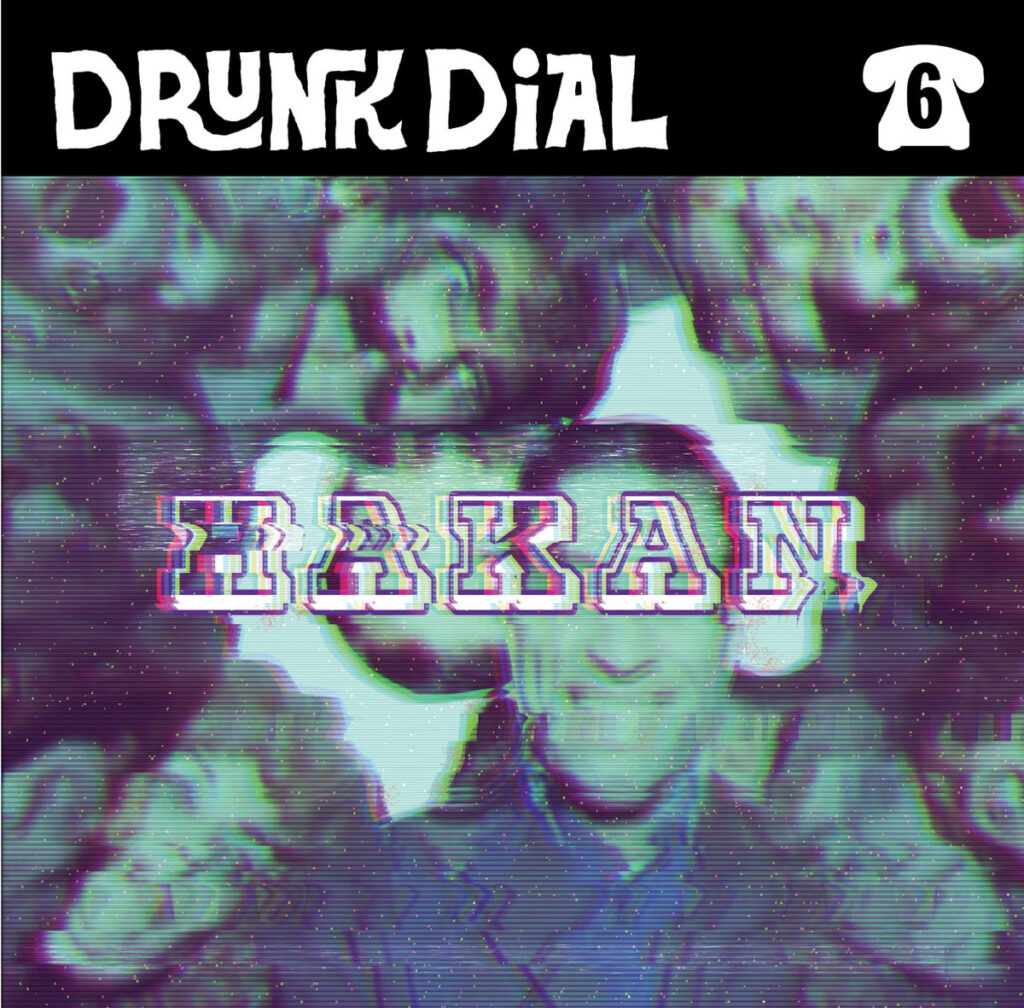 Sometimes, you hear something that reminds you it’s OK to be alive or something. Which is a feeling I often get when listening to Hakan, who I feel are Italy’s premier export (as attested to in my reviews of their second and third LPs on these very pages, only like, using different words and shit).

I’m sure the world at large probably thinks I expect to be recognised as some kind of deep and interesting savant or some such. However, I am a gentleman of unrefined and simple tastes. Hence I proper buzz off stuff like this, me. Long story short, these guys play a splendidly fuzzy / clean channel blend of power-pop and garage punk rock. It’s cool mate. Simple, unpretentious, and yet undeniably genius. 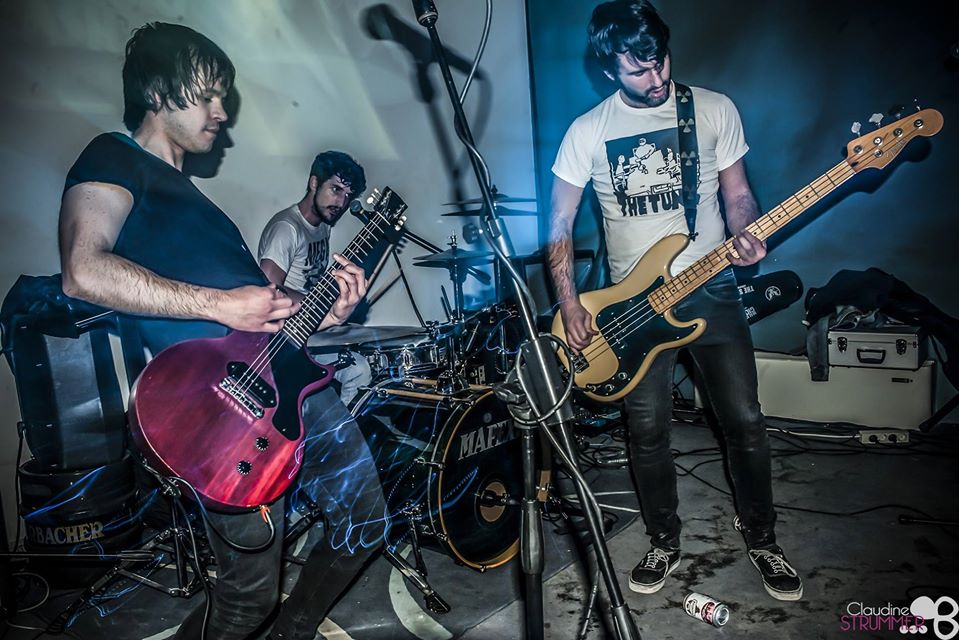 The lead track here is called Tempuras Never Come. I can’t speculate what this song is about. A misplaced food order? Maybe. Probably something much more exotic or indeed esoteric… As you’d expect if you are familiar with Hakan, this is basically an ideal blend of The Marked Men and Devo: a short sharp blast of catchy, danceable perfection.

It’s therefore no surprise then that the cover version on the B-side is of a classic Devo song: Mr DNA. It feels, well, natural? If you can imagine something between other Devo worshippers like The Coneheads and Booji Boys, only respectively less unhinged and less mysteriously plaintive, then the nail as they say, has firmly and satisfyingly been hit ‘pon it’s head, mate. My only complaint is that these songs are too bloody short! But, given my personal proclivities for that type of caper, I can’t really moan too much, I suppose. Tony of Nurgle rating: 10/10. 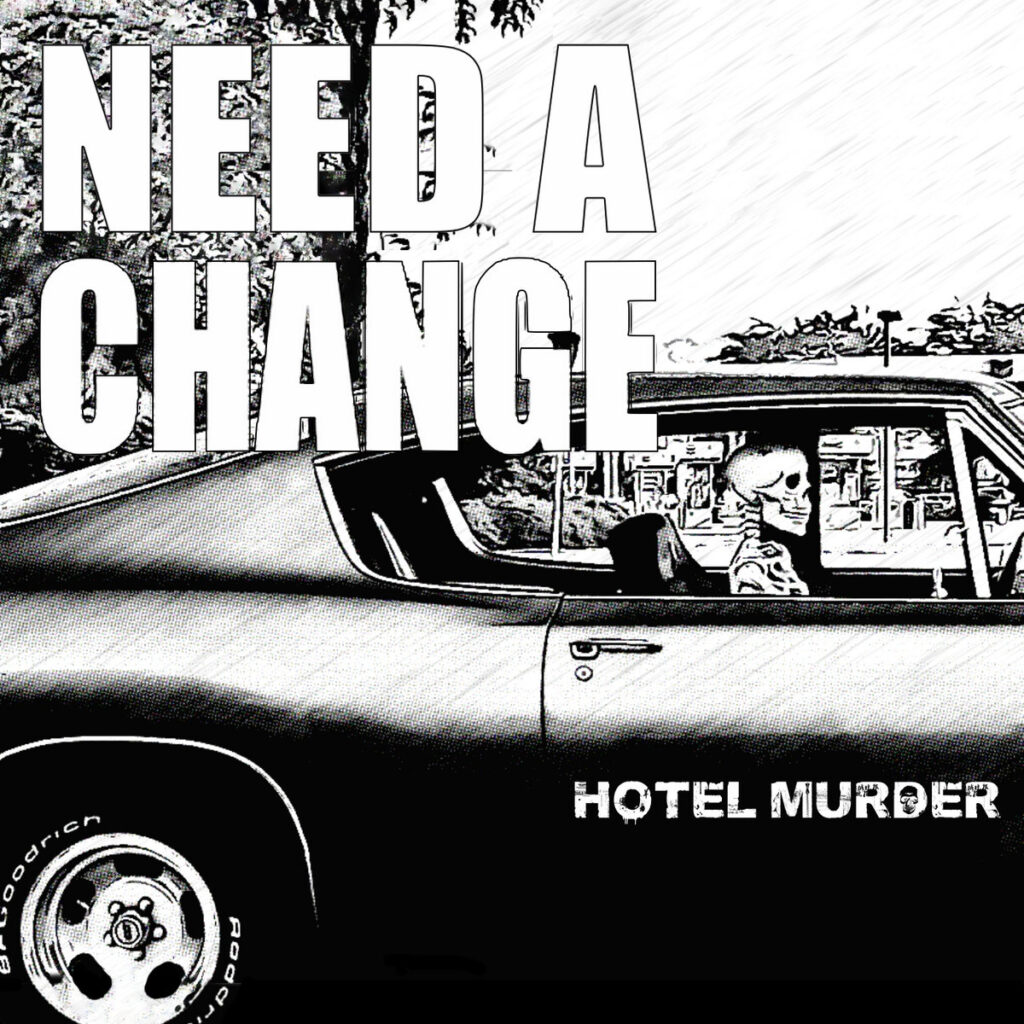 I normally steer clear of reviewing one-off tracks, but I’ve been having a fairly pleasant exchange over the last couple of months with John from Hotel Murder, mainly in which I’ve been bemoaning certain factors afflicting my life such as lack of time, lack of motivation and the pressures of parenthood. Anyway…

Remember when Pennywise could be relied upon to consistently not suck? It’s a long fucking time ago, granted, but I can remember that time like it was er, 1997. And there’s nowt wrong with a bit of misty-eyed nostalgia of that variety as far as I’m concerned. 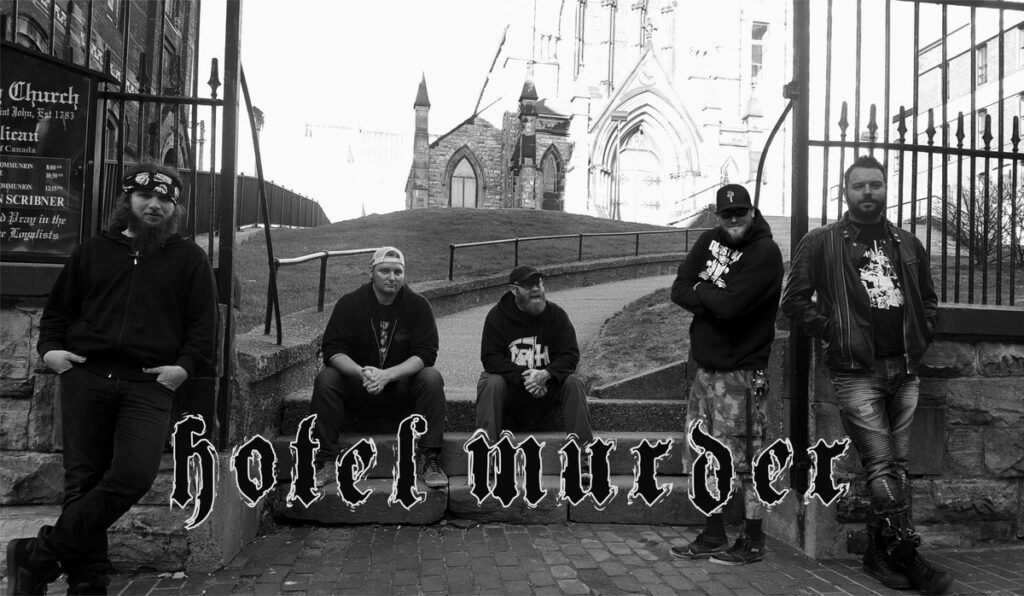 I must tip my hat to the gentlemen in Hotel Murder, as this is fucking class mate. This is in my opinion a well-considered sub-2 minute blast of classic EpiFat influenced skate punk. This sounds to me somewhere between ‘classic era’ Pennywise, Pulley, RKL and Belvedere if they could be persuaded to step away from the annoying stop-start shit that launched a zillion irritating careers that are worthy of no note whatsoever.

But yeah, this is really cool, sounds well produced and is no-frills (in the best possible sense) and all thrills. I find myself literally champing at the bit to hear a new full length… This is also up on bandcamp as “name your price”. Don’t be tight, flip these guys a quid or whatever the post-colonnial currency is in Canada. However, I do possess some concerns as to the possibility that this might be “Christian Rock” as the dudes are hanging out by a church. Maybe I got the wrong end of the stick and they gonna burn it down, Norwegian black metal style? Tony of Nurgle rating: 9/10.