Where to start? I fucking love Lagwagon, me. Pretty unfashionable to like Lagwagon these days, right? Which is something the band themselves made a joke out of with 2008’s I Think My Older Brother Used to Listen to Lagwagon EP. And I’m a very unfashionable guy, so go figure…

In my opinion (not necessarilly anyone else’s), there is absolutely no denying that the band went totally off the boil after 1998’s Let’s Talk About Feelings album. Be real with me for a moment here, yeah? Resolve, Blaze and the aforementioned EP were for me comparatively weak, and represented a run of releases that left me feeling progressively alienated. However, I do appreciate that the content (particularly of Blaze) was of a highly personal nature for the band, dealing with the passing of original drummer Derrick Plourde.

And yet, I will forgive them for repeatedly breaking my heart, as in 2014, Lagwagon completely blew my damn face off with Hang, which I still maintain is their career best, despite my having been fucking with these guys since like 1995/6 or thereabouts and my discovery of Hoss (aka when Lagwagon “went emo” according to some). Prior to Hang, well Hoss and Double Plaidinum were my mainstays, although Trashed and Duh both got some serious airtime.

So five years on down the road from Hang, the band are presenting us with their 9th studio full length, and the 9th exclusive to Fat Wreck. Considering I thought the 16 year stretch of somewhat questionable material was followed by what I’ve already said is a career best, you can perhaps appreciate my levels of trepidation going into this…

Seems I needn’t have worried. This is fucking rad, mate. Let’s start with the cover art, featuring some dude (pretty sure it might be drummer, Dave Raun for some reason) trying to appear young and relevant on rollerblades, dressed like the worst thing the 1980s could spew up, getting heckled by a couple of young skateboarders. Despite strapping on the shoes of shame being the worst choice anybody could possibly make, I can’t help but read into this a bit of self-lampooning, given bands like Lagwagon and Pennywise and so on were synonymous with skateboarding through the 1990s and are probably still looked on as the archetypal “skate punk” bands alongside NOFX and standing out from any number of bands releasing records through Fat Wreck and Epitaph and any number of smaller labels at that time. And I think that’s a cool little skit. 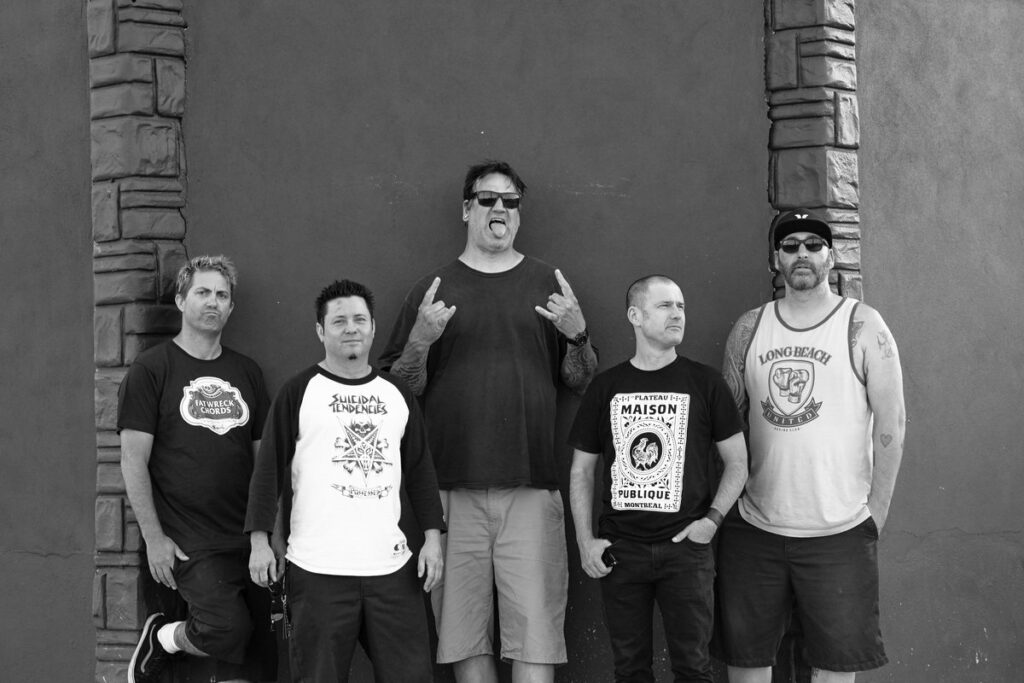 Musically, for me Hang was the natural successor to Hoss and Double Plaidinum in spite of a 17 year gap. If we take that as the gospel truth (and it is, at least in the gospel according to Tony of Nurgle) then Railer is again a natural successor. Reading somewhat between the lines of the press release, without explicitly saying so outright, the band seem to be admitting that their early tranche of albums are representative of what they are best at, and for me unrivalled at. This seems to offer sufficient explanation to me for a return to a harder, faster sound with Hang. This is something that has been successfully carried forward here.

Lyrically, Joey Cape continues to further mine a seam that ranges from bittersweet ennui to searing existential angst and back to rueful yet reflective self-castigation. And that’s why people like me love Lagwagon, mate. There’s something in those words that continues to ring true, or at the very least eminently relatable. Or perhaps I’m overly familiar with gazing into the yawning chasm of misery and pain that life can often be?
This band, it’s all too easy to forget, arose from the mighty Rich Kids on LSD, and for a time existed alongside them. The musicianship is of very high standard is I guess what I’m saying. The savage high octane riffing; the intricate yet economical lead breaks; the thoughtful and dynamically place bass and drum fills. As with Hang before it, Railer sees Lagwagon breakdown and re-imagine the high points of their early career and produce an incredibly potent opus. I’m pleased and relieved to award this record the no doubt dubious accolade of a Tony of Nurgle rating of 10/10.

As something of a postscript, there has been something that’s been bothering me for a long time. I think in around 1999, Lagwagon played Sheffield Corporation. Chris ‘Big Bitch’ Flippin, as he passed by, caught a partial comment I made entirely out of context when I was having a conversation with a friend outside the toilets. Something along the lines of “I didn’t think they were amazing tonight” or something along those lines. His face fell. I felt gutted to see this. I was talking that they had been amazing on previous occasions, but that night they’d been pretty good. If you happen to read this, Chris, for the record, I always turn out to see Lagwagon when they play the UK. As a band you’ve always blown me away apart from that one time when you were still pretty good. The night you guys played Manchester University and did an entire set of requests to a pretty small crowd was one of my favourite shows ever.