Alright then. Boston hardcore legends, Death Before Dishonor have returned to the fray with their first album in over a decade, and fourth album overall. Unfinished business, indeed, it would seem…

For the uninitiated, Death Before Dishonor have been around since the early 2000s, and take influence mainly from aggro hardcore bands from the Boston and NYHC scenes, such as Blood For Blood, Madball, Agnostic Front etc., along with a number of diverse acts from the California scene such as Suicidal Tendencies (the long-serving crossover merchants, who have a fairly aggro history, being spawned from the Suicidals crew) and Pennywise (one of the leaders of the 2nd wave skate punk phenomenon of the 1990s – not so aggro, although I’m sure I read somewhere that Fletcher Dragge did time for armed robbery). 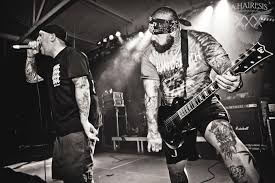 Hopefully people reading this have brought their senses of humour with them… Anyway, you can probably imagine exactly what you are getting here. Meat n’ spuds moshy tough guy hardcore. Themed around… you guessed it: revenge, bad blood, betrayal and kicking people’s balls in and stomping cowards. Cerebral, mate.

If you like visceral rage set to music, then you are gonna love this, particularly if you in your heart of hearts yearn for the “glory days” of records such as Droppin’ Many Suckas (Madball), Victim In Pain (Agnostic Front), Lowest of the Low (Terror) and that one by Strife with Arms of the Few on it that I can’t remember the name of for some reason or be bothered to look up. That’s to say that as far as tough guy hardcore goes, it’s pretty decent this. Obviously it’s no Outlaw Anthems (Blood For Blood), though mate. It’s not got the intelligence, the wit or amazing rock n’ roll edge, but yeah, as it goes, pretty decent.

If you lay in bed at night dreaming of putting on an oversize basket ball vest and baggy satin-finish shorts and spin-kicking folk in the grid in the name of fun, then you’ll almost certainly have a great time with this opus. Obviously I’m too much of a fucking wimp for any of that shit, but I would happily stand at the back nodding my head and finger-pointing at relevant intervals. Tony of Nurgle rating 8/10

Top cuts: Promises of Yesterday (which I thought was amazing and the standout moment on the album); True Defeat; Bad Blood; Save Your Breath

You can get this from the Bridge Nine Records webstore on clear with white and grey splatter or white vinyl, or on CD