OK then. I’ve not thus far got a fabulous track record with Lockjaw Records releases, having been somewhat critical of recent releases by Fair Do’s (it just wasn’t my bag) and Misgivings (which I thought was a pretty weak representation of a subgenre and that had somehow been well received; something I found somewhat bizarre). And so it was with understandable trepidation that I took on this review…

The Burnt Tapes are based in London, but grew up together in Athens. They describe themselves as playing “regret punk”. There’s been a fair amount of this type of thing about recently, for example Goodbye Blue Monday and their self-styled “misery punk”. It’s probably symptomatic of some new-fangled young people thing that I just don’t understand or something. In the last three years they have played almost 200 shows across the UK and Europe, supporting bands like Nothington, Red City Radio, Get Dead, Timeshares, GBH, Pkew Pkew Pkew, Penske File & The Bombpops. Pretty impressive, I’d say.

I’ll tell you what. It’s actually pretty good this. So good in fact that I can even forgive the somewhat Americanised vocals – only on the basis that these guys aren’t actually British though, and I wouldn’t have a clue what someone with an Athenian accent singing in English would sound like anyway. So no, I’m not mellowing, mate. I’m making an exception.

The press material cites The Lawrence Arms, Iron Chic, Jawbreaker and Hot Water Music (I really had to resist putting those in alphabetical order) as being bands to which comparisons have been drawn / will appeal to fans of yadda yadda yadda… To be honest, I can’t fault the reasoning here.

The vocal feels prematurely “worldy wise”; aching and full of regret, replete with that essential coarse edged rasp. The emotions being put across here feel fucking genuine. If you are looking for some entry-level, throwaway bullshit that sounds like it’s being put on, go and listen to the fucking Menzingers or The Flatliners and get the fuck off my website. There is nothing for you here. 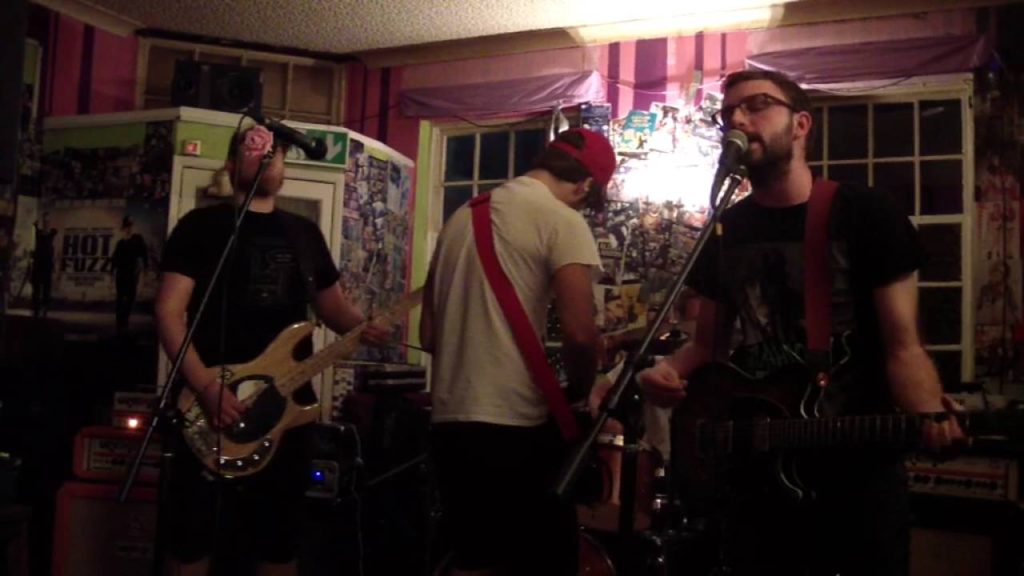 Musically, as well as the aforementioned stuff from the press material, there’s a whole wealth of stuff being drawn upon here from a chunk of the indie rock meets gruff punk output of Long Island’s Dead Broke Rekerds to that sweet spot where mid-Western emo and mid-Western punk rock collide (see also Arms Aloft, Pegboy, The Falcon etc.). I’m also put in mind of some long forgotten classic albums here such as Farside’s Monroe Doctrine (Revelation Records) and Grade’s Under the Radar (which is one of about 5 records ever on Victory that are worth listening to).

At times the guitar lines put me in mind of Chris McCaughan of the Lawrence Arms (aka Sundowner), and yet at others put me in mind of a more restrained J Mascis (Dinosaur Jr. / Deep Wound / The Fog), and whoever lays down those sweet licks for Dogs on Acid (Jade Tree). Whatever. It serves as the perfect accompaniment to a solid and inventive rhythm section that provides structure and power in equal measure whilst still slapping in a healthy dose of creative flare. And I should mention that in certain places, there’s an awesome wall of fuzzy noise kind of quality of the kind that made Small Brown Bike’s Dead Reckoning (No Idea Records) and The Wedding Present’s Seamonsters album (produced by Steve Albini back in like 1991 or something) so amazing.

I feel ever so stoked that this landed in my inbox. I do believe we have an early contender for 2019’s album of the year. If you are one of the few people that take me seriously, then: a. I feel sorry for you; and b. get on this straight away – don’t be some Johnny-come-lately loser that complains later down the track that nobody told them about this record. Tony of Nurgle rating: 10/10

You can check out the track Yuzi on the player below:

The album releases on 22nd February and is available on CD or LP in the UK and Europe from Lockjaw Records and on LP in the US from Wiretap Records.