It’s crazy that it’s almost exactly three years since the last Basement Benders joint, Lydiad dropped via No Idea Records. So much seems to have happened since then. I’ve spawned progeny, and I’m about to move cities once again. Everything in between feels like a blur. Anyways, I opted Lydiad into my top LPs of 2015 back in the early days of this blog.

With that in mind, I was obviously looking forward to giving Shrapnel Songs a blast. I suppose for the benefit of most of the current readership, who didn’t read these hallowed pages back then, I’ll introduce Basement Benders as hailing from Chattanooga, Tennessee (home or destination of the famous choo-choo). Their ranks are made up from members of the likes of Future Virgins, This Bike Is A Pipe Bomb, Jack Palance Band, Black Rainbow and Hidden Spots. They play scrappy punk rock with a folky kinda edge. 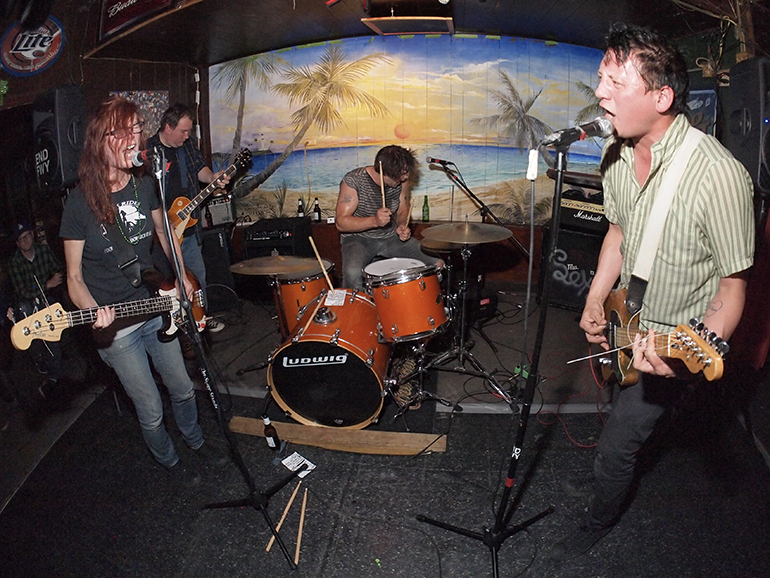 Initially I was thinking that this record was a bit of a departure from the previous joint, but the more I listen, the more it feels like it isn’t. I suppose I’d likened Lydiad to the first Against Me! LP meets the Moldy Peaches and Off With Their Heads, and yeah, I do kinda get that feel here too. There’s something about the male vocal here that puts me in mind of Tim Armstrong slurring and muttering his way through some of the better moments (although they are limited) of the Rancid back catalogue, and a healthy dose of AJJ.

Where the previous joint filled my head with mental images of aching bitterness and overly self-conscious social awkwardness, this time out it’s further embellished by an almost palpable sense of “professional alcoholism”. If this lot lived in the UK, I’d definitely expect them to be in the local branch of JD Wetherspoon when it opens its doors at 8am, staring hopelessly into the depths of a half-empty pint glass. No doubt I’ll feel like a total idiot when one of the band pipes up and says “actually, we’ve all been straight edge for at least 28 years” or something. But, you know, I reserve the right to pointlessly prattle, on mate. Whatever they do or don’t get up to in terms of their drinking habits, it’s clearly made for a banger of a record.

Check it for yourself on the bandcamp player below: