My transatlantic (transatlantean?) buddy Mark Lind has been talking up the buzz on Art Thieves for quite some time now, and threatening to unleash the best album the genre has seen in years. Well, now is the time to find out if the hyperbole lives up to reality. Admittedly I was a little bit sceptical, as not only was the claim bold, your man there likes U2 more than is healthy or reasonable (I mean, fucking Bono??? Dude???). Not that I can make any realistic claim about having no guilty pleasures myself, of course!

Art Thieves are from Quincy, MA, and formed in 2012. Russian Rats is their second full length, seeing the band strip down from a five-piece to a three-piece, and take a real change in musical and lyrical direction. Two of the guys used to play in one of Mark’s former bands, Dirty Water. Mark had this to say about Art Thieves:

“To me it’s very evident that he (Andrew) put the time in. Every line and every measure of every song is well thought out. He went all out and just swung for the fences. I sort of hear it as similar to Far From Finished’s “Living in the Fallout.” Some local guys with good ideas putting the time in and getting the record as they want it before putting it out. Regarding the words, they amuse me. There’s something great about an upbeat song having really dark words and whatnot. He goes over-the-top on some of his agenda but I support his right to say whatever he’s going on about and the gusto that he goes for it with. In that sense it reminds me a bit of some of my brother’s stuff in Blood for Blood (White Trash Rob). Like… “you had to say THAT, didn’t you?” and then we all laugh. Bands that go all out like that don’t happen often enough.”

So, er, anyhow… girdeth thy loins for battle my stalwart compatriots (or something) as I investigate Massachusetts’ latest wonders…

On my first listen through, I was admittedly preoccupied with a whole boatload of real life shit, and therefore wasn’t in a frame of mind to absorb that much. Second listen I’m starting to think this is possibly pretty good. Third listen definitely confirms that this is a grower rather than something that throbs with veritable immediacy. At a point such as this I usually decide either that I totally can’t be arsed investing any further, or I allow myself to be compelled into saddling up for a more in depth foray into the unknown. In this case, it’s the latter. Sometimes music can challenge you, and it’s good to be challenged. Or so I’m told, anyway. Regardless, I’m finding I’m definitely being challenged by the second LP from this three-piece.

The opening third of the album feels like something of a distinct and well thought out grouping, starting with an intro / call to arms / calling of bullshit on this latest era of our life and times in a socio-political-economical sense. These guys are angry, and they are right to be. They live in a country governed by a man seemingly made out of compacted Doritos dust and a fright wig, with no sense of a moral compass of any kind beyond his own self-importance, backed up by an all-out asshole parade (to use the moniker of everyone’s favourite power violence act) of right wing dimwits. And seemingly the majority of the populace are either behind these idiots or happy enough to just blunder along like they’re completely oblivious. I mean, this has obvious parallels to our own political climate here in the UK, where our head of state is basically the baddy from Terrahawks, heading up a cabinet of cackling bigoted buffoons.

But yeah, as I was saying, the first three songs, Proxies, The Untouchables and I’m Being Watched seem to sit particularly well together. They seem to have a sound similar to that of The Swingin’ Utters classic LP A Juvenile Product of the Working Class, and again deal with a society governed by imbeciles and the level of resultant chaos and paranoia inherent in life in a heavily surveilled and policed state where the powers that be are rarely held to account and even more infrequently successfully prosecuted by Joe Public for their strong-arm tactics and abuse of power.

Things I Want is a sub-minute burst of dissatisfaction at the current state of the scene, the creative industry and a society all too willing to turn a blind eye to injustice (I’m probably misquoting here): “I wanna watch The Wire again, I wanna hear an original band… I want to brand a misogynist, I want to shame him ‘til he quits…”. Following this, Hate Me Harder is an angular jangler, and seems to walk a line somewhere between The Clash and The Police.

With 7th track, and first of side 2, Old Brigade, the LP starts to take more of a rock n’ roll feeling aboard. This kind of feels oddly somewhere between The Stray Cats and some of the more recent stuff from The Swingin’ Utters. Despite repeated listens, I’m not really sure how I feel about this one beyond kinda liking it? DIY USA is a return to the more up tempo moments of side 1, but has that distinct Massachusetts feel melded well with classic Bouncing Souls style singalongs. It leads well into Oakland Avenue Punx which feels like early Street Dogs goes rock n’ roll. 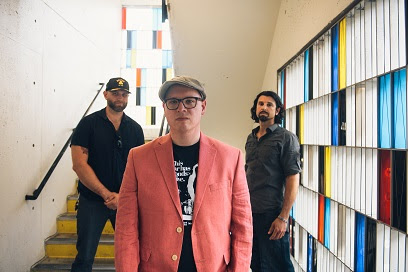 By track 10, We’re Being Lied To, I’m being put in mind of cuts from Civ’s Set Your Goals album. Only with the songs being considerably slowed down. I don’t wanna piss on anyone’s chips (as we say in certain parts of Northern England), but I feel like I’d enjoy the rock n’roll feeling tracks such as The Cops and This is Low Art (a pairing that closes out the album) much more if they were done in double time with a snappier sounding guitar and drum combo. I dunno, maybe I’m just being weird or something. There’s nothing wrong with those songs as they are presented here or anything. I just feel like I want to be a bit more excited I guess? However, I do feel like I’m enjoying them more and more with repeated listens.

In conclusion, I’d say this is something of a rough diamond for me. I can however think of a good number of people that would be totally stoked on this, for example my friends Zander and Liv who are currently living in Birmingham (Alabama) inventing lasers or something – shout out Liv and Zander!. It’s worthy of inclusion in your record collections, friends. It’s a Tony of Nurgle rating of 8/10 for this one. But why take my word for it? Joe Gittleman from The Mighty Mighty Bosstones had this to say:

“it’s kinda like Hot Water Music meets Green Day but it has some sugary pop and soul in there. A cool and adventurous record.”

You can check this joint out in full on the bandcamp player below: