In her non-review this time last year of Jeff Rosenstock’s WORRY, my friend and Ibiza-Bombing associate Em wrote of her concerns as she found herself uninterested in much new music. Man, do I feel and fear that. It didn’t occur to me until trying to do my own review, but the irony is that Rosenstock is someone around our age speaking to many of the same concerns she mentioned. His surprise, New Year’s Day album has a title that alludes to a thousand fractioned rock and punk genres, struggling to make a continued impact on some of us in the wake of their ancestor scenes. He’s too distracted, exhausted and depressed by adult life to do the things that used to bring him satisfaction. And he might well be something of a workaholic: POST- is his third LP in three years, including the 17-track Worry (you get one ugly capitalisation per album, Jeff) and various side releases. No wonder three quarters of the thing are about sleep.

When you’re an adult, bedtime approaches as a spectre tapping at your to-do list, encouraging a workaholic mindset as you seem to fall ever further behind. You have to sleep when responsibility dictates or allows, and if you can’t, that’s your foundation for gettings things done right down the shitter. “You’re not fooling anyone when you say you tried your best,“ wails Rosenstock on the insomnia dirge All This Useless Energy. “You can’t be your best anything when you can’t get any rest.” You measure productivity tomorrow against productivity now. I will stare this paragraph down until every word is meaningless, wondering how it might have flowed better had I made decisions that got my brain a better night’s sleep.

JR knows the energy he has at night is not so much useless as deployed at the wrong moments. On following track Powerlessness he writes as if wishing to be an activist, but one who doesn’t have the resources due to personal issues, nagged constantly by well-meaning Chomsky quotes:

“If you go to one demonstration and then go home, that’s something, but the people in power can live with that. What they can’t live with is sustained pressure that keeps building, organisations that keep doing things, people that keep learning lessons from the last time and doing it better the next time.”

He feels self-involved, unaware and tokenistic. “How can you solve all the problems around you when you can’t even solve the ones in your head?” On Yr Throat — a track as wonderfully euphoric in its misery as Nausea off We Cool? — there’s an unexpected second-half veer discussing the infamous Access Hollywood Trump tape. Otherwise the song is an all-too-relatable one about creative block. Rosenstock does this on a number of occasions, mixing the personal with the political, again, as if a wannabe dissident who feels guilty for not devoting more of his efforts to it.

Another persistent theme is longing for childhood. It goes well with the sleep centrepiece. When you’re a kid, you hate bedtime because it means the fun is over for a while, but now all we want is to sleep like babies. In the opening minutes of the epic USA, Rosenstock bounces through emotions akin to the five stages of grief regarding some obvious subject matter. Overwhelmed, he huddles into a mantra, “we’re tired, we’re bored,” searching for comfort. In come soft, colourful keys of a calming, womblike retreat. Soon the repetition of “tired and bored” becomes a childish, celebratory tantrum, a “Here We Are Now Entertain Us” for the dragging-on capitalist age. Even the cheerleaders from the Smells Like Teen Spirit video are here, chanting “Et tu USA!” Clearly Jeff feels that we need to reach out to some punk heavyweights in our current landscape, with allusions to The Clash as well (“I fought the law, but the law was cheating,” I’m So Bored With The U.S.A.). 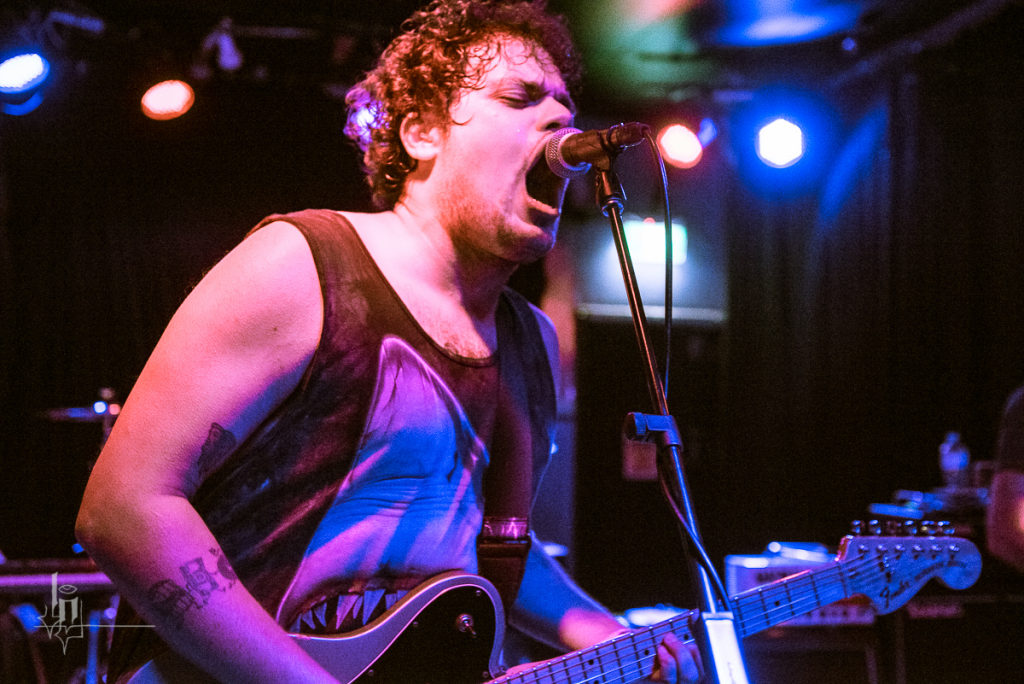 To go back to Nausea, I think that video — where Jeff is vomiting confetti on stage amidst other oddities — is part of the reason that I picture his songs performed in a friendly living room atmosphere. No matter how down the subject matter might be on this album, clapping, tambourines and back-up vocals come in strong to give it a uniquely intimate, all-inclusive party vibe. When I hear the musically upbeat parts of Post I imagine the singer has the sort of punk support network that I have often craved. Given how defeated the guy still seems to feel, perhaps that concept is more mythical in its magic than we all imagine, but I bet his gigs are something at least a little like that. Or perhaps considering that we seem to be slowly accepting that our societies are spawning widespread mental health catastrophes, it’s no wonder that punk rock is looking more and more like a giant self-help group where we all wallow together.

If you aren’t bummed out a lot, don’t let my yammering about how torturously engaging the record is put you off. It’s very much fun and enjoyable to listen to, irrespective of subject matter and pace. The first half that I have already detailed gives me a number of dance-about goosebumps, and while the latter, generally more subdued half doesn’t quite manage that, it’s still pretty decent. Beating My Head Against A Wall is the most traditionally punk in structure, Queers-like in its simplicity and length. It’s also one of many tracks where a bit of well-used keyboard adds levity, like a sincere Reggie and the Full Effect or underground Andrew W.K. (with whom Rosenstock also shares those loveable amateur high notes).

The only track I take particular issue with is Let Them Win. It’s a pleasant enough closing singalong, almost as simple as Beating My Head Against A Wall seven times over. Between this and the lovely, sad ballad 9/10, however, the last two songs on his third album, it makes you wonder if Jeff is going the way of Wood/Water (by The Promise Ring – Tony) and Jets to Brazil, increasingly peeled of punk influence. I like Wood/Water and Jets to Brazil, I just would rather he went somewhere less well trodden. I get that he may be trying to transcend the subculture, à la broad movement building, but this is just too close to the simplistic, boneless McResistance offered up by power-hungry, Russiagate-bollocks Democrats to be all that compelling. Let Them Win and its repetitive chants strike as something of a hollow defiance after so many preceding tracks detailing debilitating personal demons, the title hinting again that Rosenstock might rather be passive. Maybe that is the point, and weary defiance is better than nothing. Perhaps he was worried his best lyricism isn’t easy for casual listeners to notice, but there has to be somewhere between total opaqueness and Twisted Sister. The second act of the song is if anything practical, a series of sleepy, stargazing tones for any listener who has trouble settling down at night.

It’s not too surprising to learn that Rosenstock is working on a Cartoon Network programme named Craig of the Creek, about a “kid utopia of untamed wilderness.” This is someone who wants to be wild and free, but is no longer sure how. With the soulless, distinctly un-wild trinkets of modernity that Jeff continues to glumly criticise on Powerlessness and 9/10, we’re constantly made to feel that we’re living in the aftermath of something that must have been superior (music movements, quality of life, our own childhoods). It’s the Post-everything age, where it’s hard to imagine the future being an improvement; in that context, it makes sense that this isn’t a great musical departure from Jeff Rosenstock’s previous solo material. Fortunately, his style is relatively unique to begin with, and his attempts to deal with the present are earnest, often amusing and welcome. We’re tired, we’re bored, and there’s no going back. Thank goodness we live in interesting times.

Like all of his releases, POST- is available for free download from the Quote Unquote website. Portions of donations, however, will benefit hurricane relief through Defend Puerto Rico — those un-citizens of the American project — so consider slamming down a few bob, bitcoins or benjamins. Physical copies will be available in March from Polyvinyl.