Being the once and former “angry man” on this blog apparently means that I get saddled with all the bolshy hardcore stuff to review. Lucky old me. I keep plugging away though, in the vain hope that when Tatu or Belly release new material, Tony might take pity on me and throw me a fucking bone.

Anyway until that fateful day arrives I’m stuck here with Scarfold from Canada. Another new name to me since they’ve only been around for two years but simply being green doesn’t get you out of jail for free with me. By the numbers late nineties/ early noughties metallic hardcore. Think Until The End/ Shockwave rather than Atreyu or Bleeding Through.

Welcome To The Divide comes in hard as nails and I’m thinking ‘yeah it’s corny but I would def have moshed to this in 2002’…then Scarfold immediately shoots itself in the pecker by yelling some entry level bullshit over the top. No lie, I started nodding my head when it kicked in and  as soon as the singer gives it ‘Divided You Fall‘  over the top, I told my computer to fuck off and made a cup of tea and watched an episode of Kolcheck: The Nightstalker instead. Raise your game. 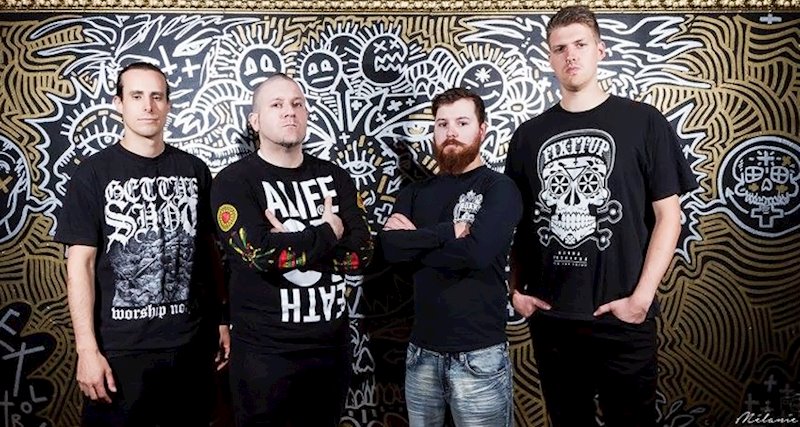 Returning an hour later to give it another try and I’ve discerned some positives. The singers got a strong gravelly voice that really reminds me of Anderson Bradshaw on the Promise ‘Believer’ album. The riffs are hard and the song writing is solid enough but the production really kills the aggression. If the recording was a bit more ragged round the edges and they had some filth on those bass and guitars I might have given this points for at least sounding nasty. Sadly it just sounds like it was recorded on Garageband with sampled drums and shit.

Look, the songs are catchy enough and I can definitely back the anti-Nazi sentiments Scarfold express on this release. There’s no doubt in my mind that these chaps are sincere and will put in the graft, but on a personal level, I’ve always hated trite lyrics about dedication to hardcore and staying true and all that stuff. It’s a pointless hardcore lyrical device that means very little and just dries me out. Scarfold are probably a great band for the younger kids in their area. It’s immediate and moshy and the lyrics are catchy but it just reminds me of too many nights stood kicking bricks outside the Camden Underworld wishing I had somewhere else to be.