Hot Water Music (along with bands such as Avail – R.I.P) are notorious for being hardworking, constantly on tour, and immune to anything approaching mainstream success, whilst being applauded, nay, even worshipped on the underground circuit worldwide. In the case of Hot Water Music, who with this (2nd) reunion album are now 8 proper albums in (plus two live albums, three compilations collecting 7in only material and rarities and two major split releases with scene luminaries Leatherface and Alkaline Trio), it seems everyone has a favourite era. This broadly falls into two camps: The earlier period of releases through the small D.I.Y labels (including Dog House, Jade Tree, Toy Box, Some Records, BYO, and of course the sadly defunct No Idea Records); and the middle part of their career, which saw a series of more commercially successful albums jointly released through Epitaph (CD versions) and No Idea (vinyl versions).

The one thing everybody can typically agree on, though seems to be that the final Epitaph release, The New What’s Next (2004), and the initial reunion album, Exister (Rise Records, 2012) were pretty terrible. The former I found to be overly downbeat and uninspired, the latter just felt really clippety-cloppety and somewhat forced. So yeah, anyway, five years later, it’s 2017, and we are being presented with another ‘reunion’ album in the form of Light It Up. There was no way on this ball-of-shit planet we inhabit that this one was not going to be massively contentious and met with more than a little trepidation.

Personally speaking, I consider myself to be more of a partaker of the ‘early career’ section of the back catalogue – the three records I tend to listen to the most being Forever & Counting, No Division, and Neverender (one of the aforementioned compilation records, which I personally consider to be their best material). That’s not to say I don’t enjoy selections from the first and second records of the Epitaph period (A Flight & A Crash and Caution). Having said this, I do feel like those two records were pretty heavy on them ‘filler’ tracks. I’m aware that statement will make loads of people think I’m mental, but alas, I’m running a bit short on fucks to give, mate. 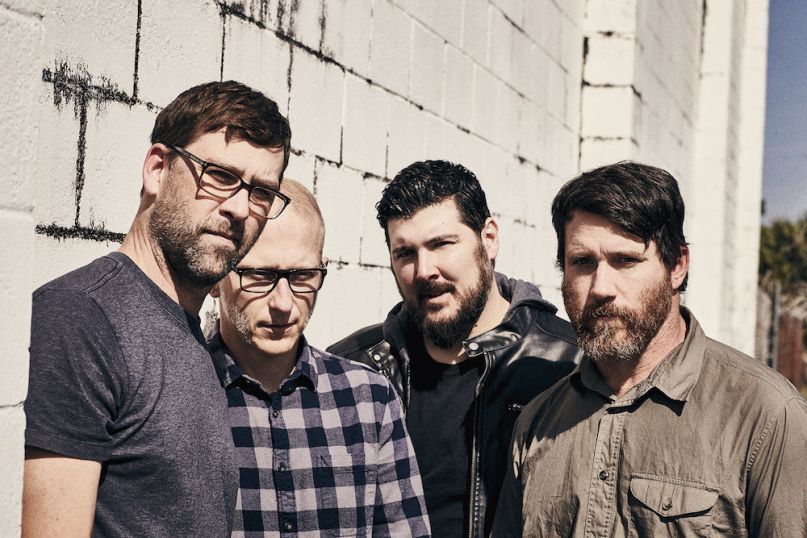 As far as first impressions go, I’ll throw it out there: I was most pleasantly surprised. From the opening licks of Complicated, it felt almost felt like I was slipping on a pair of comfortable old shoes (or maybe granddad slippers, which tragically, I do own – however, Nathan Bean has admitted to buying shoes at a garden centre, so maybe, just maybe there’s hope for me yet). There seemed to be a whole host of reference points to the ‘classic’ period of my beloved band.

Almost the whole record seems to be solidly constructed around that bold and distinctive back-section, with Jason Blackman’s bass lines powering alongside and intertwining with George Rebelo’s thunderous, percussive drum style (I can’t make any claims to the veracity of this, because I’m an idiot, but I have read about this being described as a ‘jazz-trained’ style – fuck knows, pal). The deep, resonant, understated chugging guitar sound of the glory days (see any of my favourites as well as Fuel for the Hate Game – which I also rate pretty highly, for the record, and was the first HWM album I bought) seems to be embellished by the more heavily foregrounded melodic style demonstrated on the particularly memorable sections of A Flight & A Crash and Caution.

It would of course be remiss of me not to reference the vocal element of Hot Water Music; something which has launched a thousand pale imitations (and a few good ones). Chuck Ragan’s signature paint-stripper gargling bellow is still 100% in evidence – still demonstrating core influences taken from 80s hardcore, bluegrass and country music. Chris Wollard’s (slightly) less abrasive and more melodic straight-up vocal style still shines equally as bright and still provides that well realised counterpoint to Chuck’s vocal.

What I’m also finding particularly interesting here is that something else seems to have come full circle (not in a Pennywise way). I mentioned before that HWM spawned a whole host of ‘grufty punk’ bands, many of which were poor. But some are (or were, in the case of those that fell by the wayside) fucking great. There seems (to my listener’s ear) to be an informed nod or two here to bands like Nothington (for example), in the form of certain vocal harmonies and lead guitar lines – something I thought was particularly apparent on Take You Away.

Something that struck me as really interesting is that I’m also hearing – in particular on title track Light It Up – some wonderful backing vocals that put me in mind of that very brief period when AFI really shone (circa Black Sails in the Sunset). This particular number is probably the fastest on the record, and is driven along by short, aggressively bitten off and spat out clauses, which I feel is a bit of a departure for HWM in a way.
There’s also some fantastic up tempo melodic hardcore ala classic Bad Religion worked into certain numbers here (again with the harmonising). Greg Graffin once sang the classic line: “no Bad Religion song can make your life complete” (No Direction), but I feel pretty fucking optimistic right now that Light It Up just might.

I find it incredibly gratifying to find HWM are still willing and capable to put out those rabble-rousing anthemic shout-alongs that many of us have come to know and love (and that have also been sadly missing from the last couple of releases). Most pertinent cases in point here being Complicated, Show Your Face, Never Going Back, Vultures, and Bury Your Idols. Alongside these, we’ve also got some of those classic substantial Leatherface influenced ‘mood vignettes’, as I like to call them, replete with the expected morbidly epic sounding chord progressions that segue between the verses and choruses, which demonstrate those bleak yet oddly uplifting soaring and darkly majestic vocal lines.

In summary, against all odds, and despite previous let downs, I find I’m loving this. I feel like it’s a true return to form, and I’ve found myself struggling not to keep playing it. Having said this, it’s not perfect, but I’m stoked enough to give it a well deserved Tony of Nurgle rating of 9/10.

At this current time, there’s no stream of the full thing out there, so you’ll have to make do with the YouTube videos, innit.

It’s going to be available to buy from 15th September from decent record shops, so remember to support your local independent, yo. If you don’t have one, you can get a preorder here in the EU and UK, and here in the USA / Canada.