Wait, this album came out a few months ago. Oh, oops. Well, this one is a little late then. Ah well, I’d best get on with it then… So what is this, then? Erm, power-pop-punk-emo from Chicago and released on Polyvinyl. OK, and Pet Symmetry are? Well, as I said they hail from Chicago and are a three piece band featuring Evan Weiss (Into It. Over It.), Erik Czaja (Dowsing) and Marcus Nuccio (What Gives) – none of whom I have ever heard of before but maybe some of you lot have (Dowsing are great – Tony). A thorough minute of research shows that they formed this band as a side project to allow them to have fun. And make puns (with the first album being called Pet Hounds). This album, Vision, is said to be both poking fun at the idea of being musical visionaries as well as a joke pointing out that they all wear glasses and could easily feature in a ‘Vision Express’ type advert. 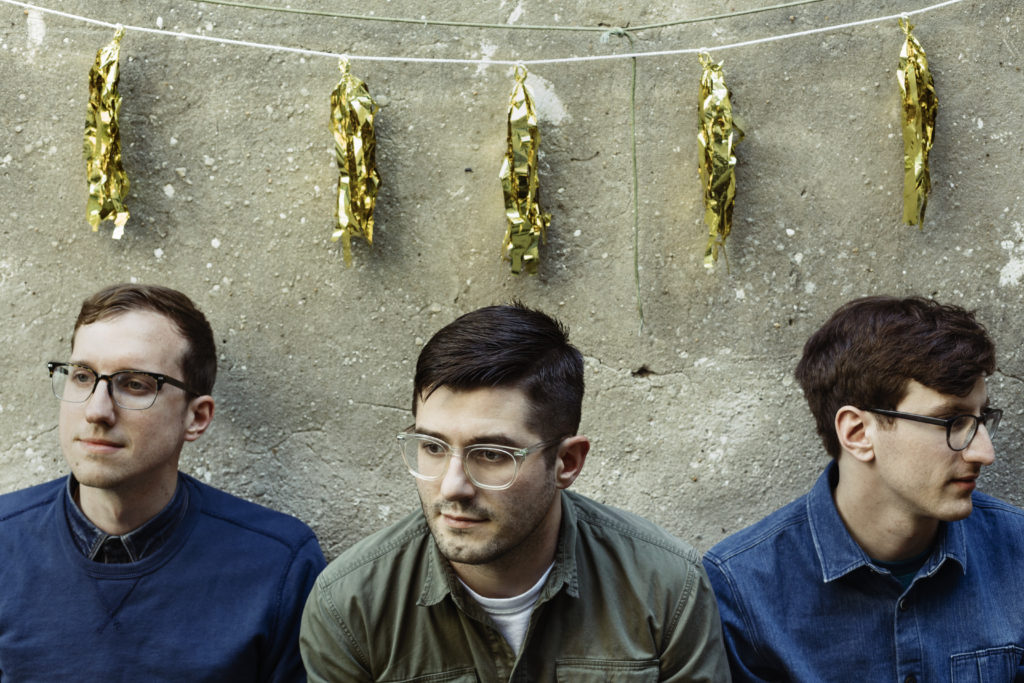 The basic take away from reading their bio is that they are here to have a laugh and play around. You know what? It shows. Not in a “this is a lazy way”, but in a “this is fun” way. The album is a laugh. Chilled, fun, easy to get into and easy to listen to. Basically an album that you can just stick on whenever. Music for the fun of music’s sake. I think that I listen to so much complicated and arty stuff, or albums with lyrics deeper than the Mariana Trench, and sometimes it wears me down a little. I need the fun albums. I won’t listen to them all the time, but they do act as a palette cleanser. It’s fun. Why do I think that this album is fun? Well, because the genres change around here and there. It comes across that they are playing what they want to play. That’s kinda great.

So, normally I like to do a bunch of comparisons to other bands. However, I am so out of the loop with this kind of genre I will look pretty amateur – or just damn old. What can I say?

The album starts with a good solid dose of pop punk in the song Everyone, if Anyone and Stare Collection, before going into Jimmy Eat World style poppy emo. Songs like St. John and LTCTLYB show the faster side of emo / pop punk crossover, reminding me of Pennybridge Pioneers era Millencolin which, whilst a move away from their earlier stuff, I still really enjoyed. And the emo doesn’t seem to get too self involved. I couldn’t even tell you what the songs are about – I just stuck it on and listened to it like I did ‘Dude Ranch‘ back in the day.

But, I dunno, there is more to this record than that. Sure, there are songs that hold true to the emo/ pop punk genres, but there is more going on here too. With a million listens I would probably be able to sing a lot back, but, realistically it won’t get that much attention from me. I’ll stick it on when I need something fun to play in the background. The down side to this is the songs that stand out – the ones that don’t necessarily fit into the emo mould. The lo-fi rock songs. Mostly Water is a good example of this, whilst Lint Roller takes this and adds a little Postal Service into the mix. However, my favourite track on the album is You & Me & Mt. Hood. The lo-fi beats sounds like a bit like slower Weezer but with a dose of Brendan Benson – one of my favourite musicians and co-founder of the Raconteurs with Jack White. I love this song and I could happily listen to an entire album of tracks like this. Not exactly the same, obviously, but a bunch of them. Especially if it added a few more crunchy songs like Eyesore – a great Nirvana (Bleach-era) grunge track.

So what is the take away here? Well, I liked the album. It was fun and I’ll listen to it more. I suppose the only downside being that I liked what I class as the ‘exceptions’ on this album the most – so I guess maybe I am not the target audience. I guess that is interesting in it’s own right. Whilst I say I want a fun, simple pop punk album – maybe I don’t? Huh.

Well, have a listen to it here: and grab it from Polyvinyl here or wherever you can.

You can play it in full on the bandcamp player below…