I don’t know why Editor Tony keeps giving me these types of records to review. ‘Yeah but you used to be in a hardcore band and you’re dead handsome and charismatic and that mate’. Sure Tony, whilst all of that maybe completely accurate, let’s not kid ourselves, it has been at least fifteen years since I had any relevance on the matter of metallic hardcore. In the interim, that most vicious strain of punk has evidently mutated into something very different from the Integritys’ and the Ringworms’ whose poisonous teat I was suckled upon as a tot.

With that in mind then, lets take a look at Make Them Suffer. Described as a ‘symphonic deathcore’ band hailing from Perth, Australia. According to a quick browse on ye olde t’internet they’ve been around for quite a while. So, in the interests of honest journalism, I played ‘clean shirt guy’ and took a little time to research their earlier works, in order to immerse myself in the back catalogue in order to place this review in the correct context. In fairness I didn’t hate it. Sounded kinda hard, like early 2000’s metal hardcore with a frosty, blackened edge. Not my jam in all honesty, but I could understand why MTS had peaked the interest of ‘the kids’. 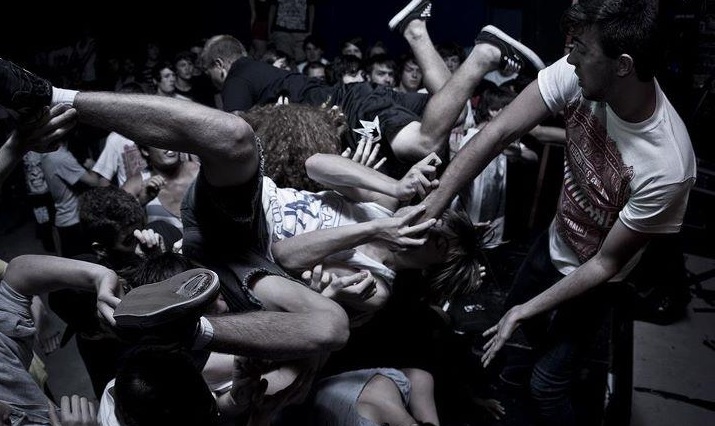 Friends, please be assured that despite the guttural vocals and overused double beater, this record is pretty fucking far removed from the unremittingly ugly and arcane fight music of my youth. This is not the desperate bare knuckle fury of All Out War nor the righteous indignation of Earth Crisis.  No, this is something else.

This album is about dramatic music played by attractive people with exquisite jawlines and expensive hair styles. People who have stylists. At this juncture in my life I’ve got a couple of chins, a six quid haircut and I recently bought some shoes at the garden centre….I don’t know if I am really qualified to comment on much of anything anymore to be fair. But here we are.

I honestly have no idea how to review this music with any degree of objectivity. I mean what do you want from me, a balanced critique? A considered overview of this records virtues and flaws? Or do you really want to know what I think of it? The moment the intro to the first song kicks in, imagine if you shoved Throwdown, Cradle Of Filth and Bring Me The Horizon into a Nutribullet and hit blend. The resultant puddle of shit flavoured gloom juice is what would ooze out the tap and crud up your machine for weeks. It’s like someone gave the fourth season cast of Glee the task of covering any Bleeding Through song and said ‘Gang, I really need you to make this tune suck shit way more than it did originally, kay?’

Sure there’s some harsh vocals in there, like your man from Hatebreed, and the occasional Orange County 2002 style breakdown – but then Make Them Suffer seem intent on shoehorning in some really ill placed keyboards and it just winds up sounding like a Poundstretcher version of  Evanesence. Like the keyboards do not emphasise or compliment the music at all. I don’t know, it  sounds like someones spinning one of the crap Unearth records whilst playing a scary video game on the telly at the same time with the volume cranked way up.

Look, I realize heavy music has moved on, and evidently I am far too base a creature to have evolved alongside it, I know this. But if this is progress then motherfuck the quest for fire, and give me a bicycle with square wheels. Give me a big heavy rock and I’ll stove my own fat stupid head in, because for real: fuck this noise.  If this album was a Broadway show, it would be Aids: the Musical. I imagine the people off Love Island would listen to this record and think it’s proper good. So fuck them too.

And if you want a casual listen I implore you, just watch the video on Youtube.  Don’t put this in your Spotfiy playlist because giving this album a shot is the equivalent of stepping in a dog turd and not noticing there’s crap on your shoes until you’ve traipsed it all round the house and munched it into the carpet. Then it’s on your hands. And in your mouth. What I am saying is it will fuck up your algorithim and you’ll be wiping dogshit off of your surfaces for months to come. Figuratively speaking.

I know I’m being mean spirited about the whole thing, and if Make Them Suffer are getting to tour the world, get laid by a beautiful person every night of the week in whatever town they happen to touch down in and have themselves a right old time then good on’em. Just stay the fuck away from me.

You can buy this from Rise Records here