80s goth worship is a funny old game. On the one hand, you could (unfairly) argue that Drab Majesty are merely parodying their New Wave heroes, which is a bit harsh. On the other hand, you could claim that this album is so expertly executed that it is, in fact, a triumphant work of art. Despite it taking a few listens through to fully get my head around it, I find myself completely thrust into the latter camp.

Upon first listens, it’s hard not to mentally go through a sort of New Wave Checklist. Every single moment is so well-crafted and thought-out – the reverb-soaked snares are on point, the chorus-y guitars shimmer in all the right ways and vocalist/guitarist/mainman Deb Demure’s vocals are the perfect blend of Robert Smith, Andrew Eldritch and Jaz Coleman. Repeated listens however unlock subtle gems that resonate deeply though – the masterful guitar playing, the bold chord changes and inventive melodies – it’s these elements that push the band forward and add to their mystical aesthetic.

There are some real nice touches here, especially in the icy interludes that recall elements of the much-derided Witch House’s greatest moments (“A Spire Points At The Heavens” recalls White Ring’s hazy obliqueness). At their most melodic and seductive, the introduction of chillwave synths propel songs like “39 By Design”, “Cold Souls” and “Too Soon To Tell” into the stratosphere, pushing the sonic boundaries of the band into new dimensions that are truly breath-taking. 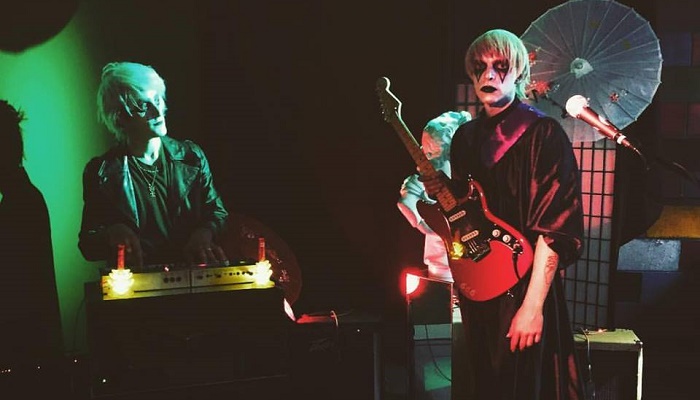 While it’s easy to group Drab Majesty with their synth-driven peers like Cold Cave, Com Truise and S U R V I V E, it’s their devotion to emotion that really sets them apart. “39 By Design”, the albums Heaven’s Gate-inspired lead single , melds lines like “If you could take a polaroid of your life, would you cry?” with suitably dramatic interweaving guitar and keyboard melodies, while “Too Soon To Tell” would no doubt be a sure-fire hit down at Tech Noir on Pico Boulevard.”Dot In The Sky” harks back to “Music For The Masses”-era Depeche Mode and deserves to be heard at excessive volume – close your eyes and you can picture David Gahan thrusting his hips in time to it’s powerful, insistent beat.

Check it out below: