Nothington were one of the last bands I purposefully went to see prior to my self-imposed exile from the punk scene and music scene in general 2010 time. The show itself took place at the Retro Bar in Manchester on 23/02/2010 (putting it around a week or so before my last Refuse To Lose prior to moving to London). There was probably 100 people or so there as I recall. I’m not mad sure who put the gig on (either D or Carpet or a collaborative effort)? But, either way I somehow ended up manning the pay-in table, at least until Nothington went on. I’m kind of unsure about exactly who else played that night, as it sort of blurs into The Steal show that happened at Retro Bar around the same time, but I think it was The Cost of Living, Offshore Radio and it was either Above Them, The Great St Louis, or some band from Leeds I can’t remember the name of. However, I can remember that at the time I was pretty excited to see Nothington, as Roads, Bridges & Ruins (BYO, 2009) had come out pretty recently, and I was super-stoked on that album, and the first one, All In (BYO, 2007). But, yeah, they totally ripped that night, it was awesome.

Roll on 2017, I’ve got a bit of a gap in my Nothington knowledge. Now this is primarily down to my often referenced and definitely regrettable self-imposed almost total exile from music. I had no idea what to expect, basically. I think I’d envisioned hearing a record that had the rapid-fire, no-holds-barred immediacy of Roads, Bridges & Ruins, with its finger pointing shout-alongs and call and response anthems. So admittedly, I was initially left feeling a bit perplexed and sort of disappointed. But I wasn’t too sure why. The music was pretty good. The vocals hadn’t become at all polished over the intervening years. Just what was going on? Thankfully I don’t listen to things just the once before forming an opinion in cases like these, so I gave it a few more blasts, and with each listen, I started piecing together something that made more sense to me. 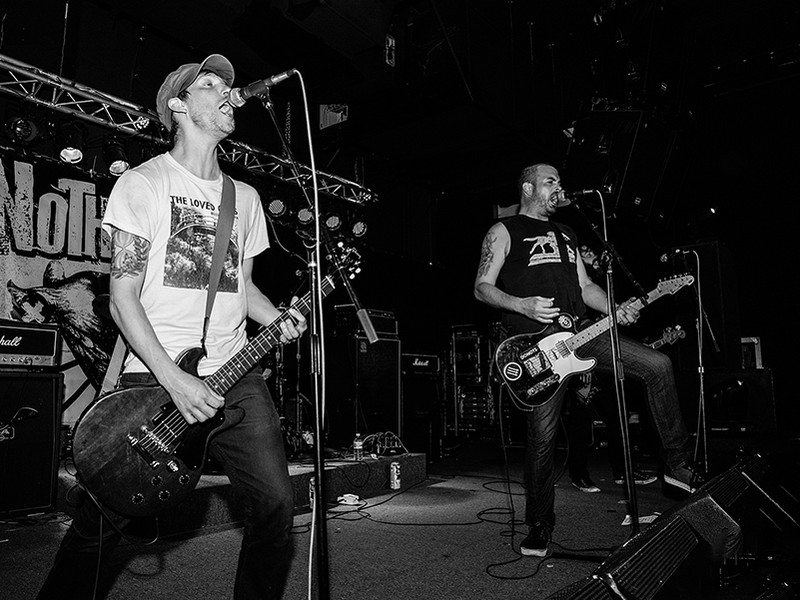 I think, without trying to make some kind of pretentious statement, In The End is a prime example of a great band organically evolving, or maturing into the next phase of their life cycle. What have we here is what I would interpret as guys that are now a few years older, who are seeing things from a cynical or somewhat jaded point of view. However, this point of view feels a great deal more introspective or self-reflective, and exudes a feeling of new dynamism and vigour. Whether or not that is what they are trying to communicate, that’s what I’m picking up on. So, er, there we go, I suppose…

The music is as tight as a gnat’s foo-foo. If gnats even have foo-foos. If somebody can please clarify this, I’d be like, all grateful and shit. These guys clearly write very well together. The constituent parts just complement each other fantastically. The rhythm section here must be amongst the best that are doing the rounds at the moment – I’m not a musician, but their drummer clearly has something cool going on, and the bass meshes real well – shit-hot, mate. They do exactly what they should do, in terms of forming an intelligent and creative structure around which the guitars and vocals weave. Bob on.

Now, for a good period of years, there’s been a whole boatload of grufty vocal punk bands doing the rounds, of which I admittedly rather like a goodly number. It can be hard to find the diamonds among the rough, though. Vocally speaking (no, duh!), something that stands out with these guys is they have two guys taking lead on various songs, with the other guy providing the back-ups and / or harmonising. As they have quite different voices, this could sound on paper like a bit of a risky decision; in practise they contrast really well with each other.

As a whole, In The End feels like something of an achievement. I suppose those two early albums I mentioned earlier carry more of a vibe of a band just thrashing shit out (and don’t get me wrong, I got a lot of love for that whole shtick). This one just feels like it’s had a whole bunch more writing time put into it. Nothington have made a record to be proud of, here. I find myself finding more to like with each consecutive listen. While I mentioned earlier that it doesn’t strike you immediately, motherfuckers should note that this is a record that really rewards you for putting in the time to give it repeated listens. My personal highlights include (but are not limited to): Cobblestones; The Hard Way; End Transmission; and In The End.

Buy the LP from Red Scare

Buy the CD from Red Scare