I remember way back in the day kinda liking the debut album from these guys (Don’t Turn Away – Fat Wreck Chords, 1992). However, on a couple of re-listens over more recent years, I have to admit to wondering what the hell it was that I saw in that record at the time, as absolutely nothing about it jumped out at me, and nothing in particular had stuck in my mind. No real surprise then that I also remember finding the next few records utterly devoid of anything memorable at all, and thus completely losing interest in them from that point on. Remarkably, they apparently achieved mainstream success during this time (not here in the UK, I hasten to add). Which shouldn’t really astonish me at all, as, all too often, mainstream success goes hand in hand with providing bountiful fodder for idiots that refuse to exercise any form of quality control on the particular flavour of audio diarrhoea that they are happy to wilfully drip-feed into their ears. (And breathe, Tony, just breathe) But… if they managed to get away with that for a while, who am I to begrudge them? 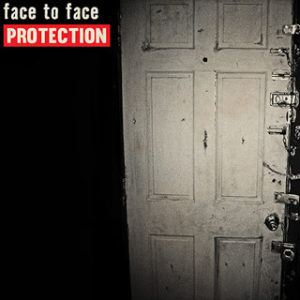 Roll on ten years, and the next thing I remember about them is that they released an album around 2002 on Vagrant, called How To Ruin Everything, which had a couple of almost memorable numbers on it, but again, nothing that I could really, really get behind. The couple of live appearances I’ve borne witness to over the years (one in 2002 and one more recently) have, I suppose, been OK, although nothing especially good or bad leapt out at me in relation to these either. I definitely did not feel encouraged to embark upon some sort of “voyage of rediscovery”, or other type of attempt to rediscover Face to Face. Bewilderingly (to me), it’s also fair to say that a fair few heads still hold some kind of affection for this band, but I can’t say I really understand why… This is not to say I don’t think they are competent musicians, as that just isn’t true. Just together as an ensemble, the sound they’ve tended to produce seems to struggle valiantly to rise out of the sorry mire of their own mediocrity. As a rule, I think that music that inspires this level of ambivalence – in motherfuckers such as myself – is fundamentally failing on some critical level. I find it much worse than shitty music, purely on the basis that I can say at least shitty music illicits an actual response from me – even if that response is to say “this is shitty”.

Anyways, I digress, as I am wont to do. Let us fast forward to 2016, and the realisation that this lot have now been around for at least 24 years (including at least one hiatus), and they are now releasing their tenth album. On listening through a couple of times (I must have the patience of a saint), it’s clearly not a massive departure from their previous sound. I’d even go as far as to say that as ensemble, they sound much better than they have previously, although there appears to have been no particularly serious personnel changes.

On my first listen, I had thought that the first couple of tracks (Bent But Not Broken and I Won’t Say I’m Sorry) were – in contrast to the rest of the record – a weak introduction to this album. On subsequent listens, they seemed stronger, but perhaps came across as a bit too much on the side of pop-punk for my tastes, in a way that reminds me of how No Use for a Name sounded after they had passed their peak (i.e. after which I thought they sucked). I also detected elements of The Offspring (which is never a good idea) and what seemed to be a hefty nod to Dude Ranch-era Blink 182 (not advisable in 2016, very much of its time in 1997). 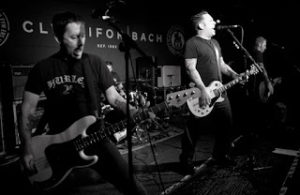 Backtracking again to my first listen, I thought the remainder of the album was much stronger than the first couple of tracks, and I was picking out some similarities in sound and approach to early Alkaline Trio records such as Goddammit and Maybe I’ll Catch Fire, as well as to Samiam during their (in my personal opinion) peak period, around the time of You Are Freaking Me Out and Astray. So we’re talking rapid, acerbic yet melodic sounding punk rock with a classic emo-influenced over-hue. Which I find incredibly strange given that it’s (as I said earlier) now 2016, and to my knowledge nobody is overly using this kind of sound these days (asides from Samiam, who are occasionally still making records, which in my opinion are consistently decent). On further listens, I’m finding that I’m actually quite enjoying this record while listening to it. Stand out tracks for me being… well, there’s the problem. Nothing is particularly standing out to me. Nothing has been sticking in my head. No. Ear. Worms. It’s particularly confusing to me that one of their other contemporaries, Lagwagon, released what was (for me) a career topping album with Hang (Fat Wreck Chords, 2014) after an extended period (16 years to be exact) of lackluster, sub-standard drivel.

In conclusion what’s my overall impression? Well, since I’ve asked myself this question, I’ll of course answer it. This record isn’t bringing anything new or groundbreaking to the world of punk rock, but I don’t think that’s necessarily too much of a bad thing. To me this is the sound of a band almost hitting their stride. Sadly, to me, this seems to be almost 20 years too late for it to be especially relevant. I can imagine people around my own age picking this up on some kind of nostalgia trip, but I don’t see what a younger punk rocker would take away from this apart from a potential gateway to better bands who were doing a much better job than this in the mid-late 1990s.
Tony of Nurgle verdict: 5/10.

P.S. I would have given it less, but it has to rate higher than that Leftover Crack album on general principle.

As usual, I will urge you to take the plunge and decide for yourself by streaming the album here:
http://dyingscene.com/news/face-to-face-stream-new-album-protection-in-full/