For those that aren’t yet familiar, The Lock and Keys are a Leeds and Barnsley based punk rock band with a strong musical pedigree, and feature (or have featured) members of bands past and present such as Send More Paramedics, Gentleman’s Pistols, Errander, Cavorts, and D-Rail. There’s also some old mates and acquaintances of mine here, harking back to my Barnsley youth, and Manchester days (Rik and Niall). In fact, I was asked by Rik for my thoughts on their new record, so of course I obliged. I was a bit concerned about reviewing something by somebody I know, as I am pretty honest and forthright with my opinions. It seems I needn’t have worried myself though… 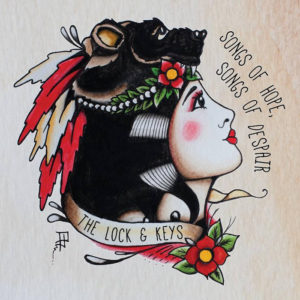 Songs of Hope, Songs of Despair is a great little 7 track mini-album, and is the follow up to 2013’s Late Nights, Good Friends (which is also worth a look). If your musical tastes range in the grufty punk / early-mid 1990s wave of proper emo, or bands taking influence from those kind of sounds, then you’ll be pleased to find that similarities can be drawn to the likes of Samiam, Iron Chic, Small Brown Bike, Texas is the Reason and the Get Up Kids (before they curled themselves into some kind of weird self-replenishing turd machine), whilst the band still bring a very British sounding element to the mix. I certainly can’t see why people of decent taste and a discerning ear wouldn’t enjoy this, on that basis alone.

As a true working class son of Yorkshire, I place a great deal of value on folk singing in their own accents, which the Lock and Keys do (rather than Americanising their vocals, which tons of bands seems to do), so I’m already thinking favourably about this from the outset. Vocally, direct comparisons can be drawn to other bands of relatively recent years from the Yorkshire scene, such as the Dauntless Elite and Above Them etc. 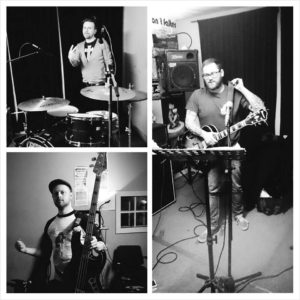 Thematically speaking, as with most music falling into this broader bracket globally, it’s quite familiar ground: life, love, love lost, regret, misery and so on (as adequately demonstrated in the title of this opus). This in itself is obviously nothing new. However, it’s nicely set against a miserable backdrop of grinding through day-in-day-out dreary working class life in shitty Northern towns , which for me personally gives it an extra element of authenticity and relatability, which can often be missing.

One thought I did have was that they could perhaps benefit from a second guitarist to give a fuller, more rounded tone. I fully expect that this may be a misplaced comment, and will have been a direct result of listening to this through the shitty speakers on my laptop!

In conclusion, you should probably be listening to this. You should definitely go and see them if they blast through your own shitty town. To be honest, I’m suprised that a local label like Bombed Out! isn’t doing anything with these guys yet.

You can stream the record here. You can also download it (which you should!) for a mere £3.