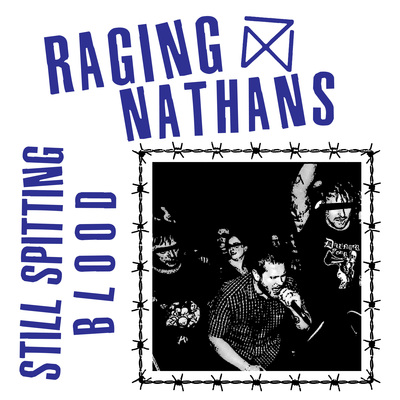 Just imagine. Five albums in eight years. Plus two compilation albums taking in various 7ins and splits and the like. Which accounts for a whopping 42 additional songs. It’s a hell of a lot, innit? Incredibly enough, I’m enough of a pedant that I can tell you that including Still Spitting Blood, The Raging Nathans have now released 102 songs altogether in just under 10 years. It’s a fairly relentless barrage of new music – averages out at what? A little over ten songs per year? That’s an album of material per year pretty much. And not only maintaining a standard, but improving on that standard almost constantly too.

Makes you think, right? What the fuck are the main stays of the punk scene, not to mention the more direct contemporaries of The Raging Nathans even doing asides from sitting around on their collective arses. Not really as if there’s been a shortage of stuff to shout and bawl about over the last ten years or so. The amount of inspiration out there in terms of inequality, economic collapse and illegal wars is merely the tip of the proverbial iceberg, mate.

Not that I can talk, given my lack of output in recent months. Pretty much takes being bodily rolled through a minefield to get me to do anything these days. Well, more realistically I probably rely on being approached by people I trust to kick my sorry ass into gear, and even that doesn’t always work.

Anyway, here we are. And I’ve been having some advance listens to Still Spitting Blood by one of my favourite midwestern punk bands, The Raging Nathans. The two people that read this site with anything approaching semi-regularity will confirm that I’ve been championing the music of The Raging Nathans for a fair old number of years now. And motherfucker, let me tell you that I will continue to do so, as long as they keep raising the bar time after time.

It’s kind of underselling what’s going on here to refer to it as merely 1990s EpiFat worship. For sure, it’s one of the core elements that’s central to the music, and yeah, for a lot of people that sound was done to death in the 90s (they’re wrong of course, the problem more being the proliferation of eyewateringly bad third and fourth rate copyists seemingly dumbing everything down). The hallmark of a true master of the art (I’m talking a band like The Raging Nathans as a collective entity) is being able to lovingly and accurately pay tribute to the original (in this case a period of time and music of a certain nature produced during that time), and further distill from it an element that’s distinctly their own. The Nathans do this exceptionally well, as do Aussie crew The Phosphorous Bombs.

I don’t doubt that I’ve previously said in other Raging Nathans reviews (or at least I probably meant to) that they seem to have perfected the art of intertwining Ramonescore (still hate that term) with EpiFat-esque skate punk. I’ve no doubt said before that they always change things up a bit soundwise with each release to keep things interesting, foregrounding particular influences in a careful and loving manner.

One of the things that particularly stands out to me is what I’d identify as a “classic era” Bad Religion fixation (Suffer, No Control, Against The Grain etc.). This really comes across in some of the vocal harmonies, rhythms and solos. Hats off, good sirs, hats off to you indeed. It kind of puts me in mind of a conversation I was having with Josh Goldman (vox / gitz) last year about that period of Bad Religion. Man, this record is fast. Not only is it fast, I’m going all in and saying it’s the best Raging Nathans album since Cheap Fame (which was my first introduction to this band).

The drumming on this record is just further evidence that Smelly from NOFX should have chucked his sticks in the bin years ago. The hooks are like those Tony Sly used to write with No Use for a Name fed through a blender of RKL and Lagwagon. Classic Screeching Weasel meets early Millencolin? Good Riddance plays the songs of the Mr T Experience? I kind of can’t really remember when music felt this urgent and fun at the same time, but fuck man, I’m all for it.

Listen to a few choice cuts below: