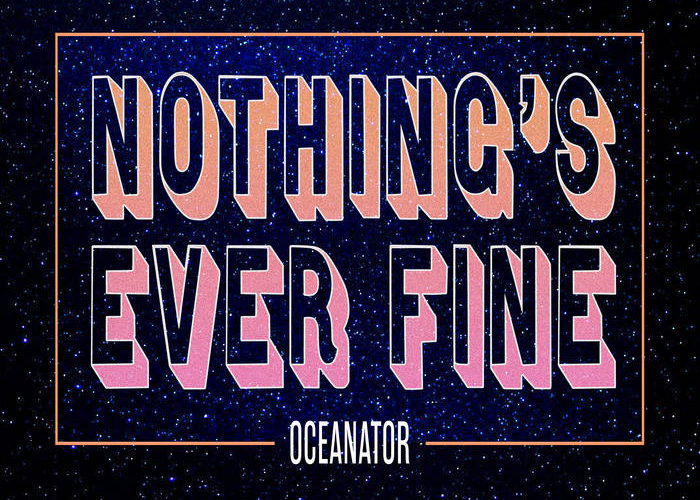 In today’s current climate – one where post-pandemic anxiety still lingers, the cost of living woes affect our daily thoughts and the general grind of just BEING A PERSON right now makes everything feel like it’s a never-ending parade of fucking shit – it makes it hard to like a band like Oceanator. “Nothing’s Ever Fine” seems to have been born out of the aforementioned misery, but it feels a bit like we’re all being forced to have fun. This record tries it hardest to scream FUN at you, but overall unfortunately it just fails to ring true with me.

The songs here speak to a very specific American experience – songs about driving to Rockaway Beach with your friends; it being an endless youthful summer of nice times and feeling fine. I’m sorry, but I’m nearly 40 and I have two different part-time evening jobs alongside my daily 9 to 5 just to keep a roof over my head and I live in a city that’s been ravaged by endless rain every single day and people addicted to Spice being sick outside my office. I just can’t relate.

Songs like “The Last Summer” and “Beach Days” pass by without making much of an impact sadly; the melodies tend to grate more than they inspire joy. However, Oceanator are actually very good at writing gnarly middle-eights to their songs, where the super-happy-posi-major-chords give way to something minor, something a bit edgier. As fleeting as these moments are, they definitely point towards a sound that suits them more and is far more interesting than everything on offer here (particularly on the first half of the album). Weezer and Pavement are obvious pinpoints, but honestly I would say musically it occasionally feels like a less-interesting version of Durham’s fantastic Martha – a band who trade in similar posi-nostalgia-tinged melodic bangers, but do so with so much more heart and better hooks.

The upbeat songs here sit awkwardly beside heavier and moodier intros and interludes – they clearly have the chops to write deep, engaging music that still manages to tap at that nagging familiarity of 90s-rock that makes your head spin. It’s just a shame that these moments last merely 90 seconds at a time.

Okay, so I am being needlessly negative, I admit it. The latter half of this album does have some fine moments which genuinely had me smiling – “From The Van” is a clear highlight with its awkwardly jerky lead riff, its down-tuned big slamming crashes and tempo rises to meet a crescendo of “ahh!!!”s – it reminds me of Oklahoma’s fantastic underdogs Broncho. “Bad Brain Daze” has a chorus which will lodge itself in your brain and “Evening” is a genuinely affecting closer which brings to mind the likes of Snail Mail or Akron/Family at their most beautiful. The crescendo that closes out the album is terrific, but I just wish that there were more moments like this earlier on in the album. I would even argue that the first half of the record should have been kept in the drafts folder and this second half instead released as a thoroughly decent EP.