Harijan have been around for ages, so long in fact that they’ve had a hiatus. Having a hiatus was all the rage while ago, just ask Fugazi. It usually meant that one or more members of the band had decided to get a proper job and wanted their weekends back. I don’t know anything about the guys in Harijan, so that’s just a wild assumption. What I do know is that they’ve come back from their hiatus and have recorded their debut album, not doing so during their first incarnation being cited as one of their regrets in the press release I’ve just read.

The band is most often compared to Capdown and King Prawn, two bands that I never really got into. A member of the former once struck up a conversation with me by asking if I liked Capdown, which was pretty awkward when I said “not really”. Maybe if I’d lied, my band at the time (The Short-Cuts) might have got on better, but truth be told I didn’t really know who he was until after said faux pax, perhaps not as Tony of Nurgle once described us as “four years too late”. Maybe we were all already on the wane at the tender age of just about being old enough to go to Jilly’s, but now is not the time to wallow and reminisce; it’s the time to review. 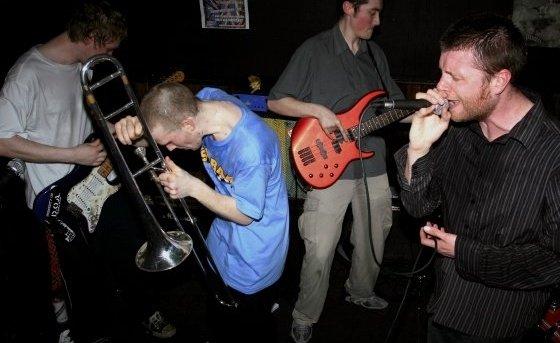 First impression is that it sounds a bit like Capdown and King Prawn, and although I was never a huge fan, I do recognise that they were very important bands in terms of UK ska punk and there are a wealth of fans of the genre that hold them in high esteem. The same can be said for Harijan who in turn have been cited as influences by a raft of newer ska punk bands in the UK, a scene that has seen a pretty big resurgence and found a new generation of fans willing to sacrifice the future of their knees at the altar of skanking.

It treads pretty much down the middle of the “Ska” and “Core” elements with the odd diversion into dub, it does sound very ‘early 2000s’ which makes sense as the press release goes on to say that a lot of these songs are recordings of their early work, so if you were a fan, this will be a must have for reminiscing and hearing the songs you loved finally recorded.

However coming to this having no frame of reference the sound is a little dated, I’m struggling a little bit with the vocals as well, the dialect swings from Mancunian, to Jamaican via possibly Essex? Which seems a little jarring, really. Personally, I’d prefer to hear his consistent natural dialect coming through. I know lots of bands do this, but it is a turn off for me, and only serves to remind me of smellies with shit dreadlocks, baggy jumbo cords and Etnies trainers.

It’s only a small complaint though, I think this record has been made for the people who were involved at the time and I’m pretty sure if you were going to their gigs 15 years ago then you are going to love this and it will be exactly what you wanted, for me I think they could have probably made a better record by working on newer material, but I guess that would have left fans of the time a little cold. 7/10 You can listen to the first single from the album below.

You can pre-order this on CD and double LP (one yellow, one black) from TNS Records. The album is released on 18th December.