Alright punks. Liverpool’s Down and Outs have been around for a fair whack of time now. They released their first LP, Boys From The Blackstuff back in 2004/5 via Sheffield based label, Dead and Gone. They now have 5 full lengths, a live album and numerous splits and 7in records in their discography, of which Keep Walking is the latest, and acts as something of a direct follow up to last year’s opus, Double Negative.

I’ve broadly kept abreast of their musical output from day one (for once in my life I wasn’t a Johnny Come Lately loser), although until quite recently I slipped properly through the cracks for Double Negative which is something of a return to form (following 4th LP Lifeline which didn’t quite cut it for me for some reason), by the way. But I’ve done a bit with these lads before, including selling a reasonable quantity of their first couple of albums, and first few 7in records. I also put them on a couple of times back in the days when they were a 4 piece with Kev Walsh on second guitar and vocal. 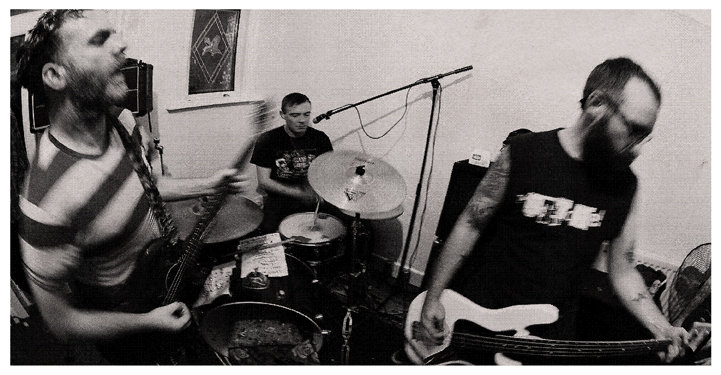 Anyway, this 7in record then. We have 3 new cuts here. Title track Keep Walking is a good track in it’s own right, but I feel like it plays something of a second fiddle to Hit The Ground and Anchored by the Weight, both of which seem to have a more rough and ready, scrappy, anthemic feel to them. Perhaps I’m feeling like they harken back more to the sound of the first three LPs, which I played to fucking death, mate.

Whatever the reason, this stands as further testament to Mark Magill’s largely consistent penmanship and to a band that have survived a change in dynamic from a 4 to 3 piece unit. Although those earlier releases certainly trod a fine line between your trad street punk and your trad pop punk, this one definitely comes down on the pop punk side of that coin, whilst still recalling that grittier edge from days gone by. It’s fucking boss, this. If you don’t know about these guys by now, it’s a great jumping on point. If you dig on stuff such as Bouncing Souls and The Drowns for example, you’ll want to hear this ‘un. Tony of Nurgle rating: 9/10