I get homesick relatively often. It’s usually mild, and can result in a wide variety of questionable viewing and listening choices. Something pretty effective at both provoking and scratching that itch is what King Prawn termed “Wildstyle”: the likes of Mouthwash, Dub Pistols, Asian Dub Foundation, China Shop Bull and The Mighty Mighty Boom. Bands with names as spaghetti-like and involved as their musical output, quintessentially English potpourri for the stagnant armpit of guitar rock music; all different, all brilliant at their best. They more effortlessly provide a multicultural experience than yer typical guitars-to-the-hilt punk act. My going this route doesn’t happen much more frequently than a true-blue pleasant English summers day, but boy it’s sweet when it all lines up. 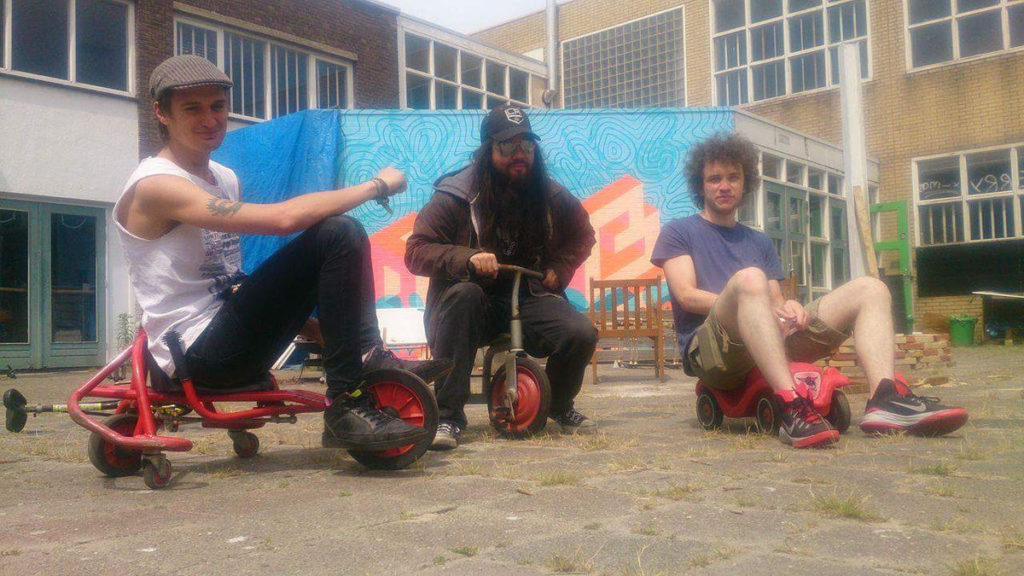 So it’s with pleasure that I come to finally review True Sound Killaz by London’s The Dub Righters (apologies for the delay, band — I wish my email would let me know when I get an actual personal correspondence, rather than filtering it through hundreds of messages from organizations asking for money to elect people I’ve never heard of). The ideal length for a visit, this is seven sunny slices of punky reggae party, English style, without the crusts cut off. It’s revelling in lifestylist subversion with a smile instead of a snarl. It’s a sunny day in a grim global power centre. It’s feel good music in the capital of grime.

Or at least that’s the tone set by the opening track Archway Keith. This is the story of top times living ideals in a home that was definitely a dump — but it was their dump. An infectious chorus accompanies details of a likely squatted shithole, with the comfortable knowledge that putting their freedom ahead of their comfort paid off. “The plugs are dodgy and the toilet’s fucked/The cost of living for free never too much.” The satisfaction of manageable dilapidation usually only lasts so long though, begging the question of how we make these options wider ranging for more people and more time. A bug ran about on my screen during this analysis. Immediately the band then apply the same thinking to humans as buildings in Life is For The Living, honouring the past while asking how best to improve and keep honouring it in the future. Having just passed the birthday of a lost friend of my own, I consider his tragedy whenever I’m contemplating how I spend my remaining time.

That friend absolutely loved Sublime. Couldn’t get enough of them. The three-piece Dub Righters have been compared to the groundbreaking group, so he might have given them a go. It’s not a comparison they mind, and you can see the logic as Sublime are one of few bands that did an American version of wildstyle that I’d say works on a similar level as the UK acts (especially their underappreciated weird middle album, Robbin’ the Hood). With the track Boom Box the Righters not only celebrate the power of a wide variety of music, they make potential lyrical echoes of fellow gravelly-voiced vehicles Operation Ivy and Rancid (and the intro resembles Caress Me Down). The street party widens with “skins, punks, travellers, squatters, ravers and you,” making for an anarchist travelling circus, a Who’s Who of SchNEWS contributors. Tapes don’t skip though, mate — signed, fellow analogue luddite.

The reverence doesn’t appear to extend to The Exploited though, with Beat The Bastards being far from a cover. Exactly when you might expect aggression, it’s one of the lightest cuts here with it’s woozy dub cushioning. Other than the friendship/brag title track the remainder is also a relatively laid back affair. The closing Black Coffee is a situation where a band hits a tender groove so hard that they basically just go around again and you do not mind. It’s the best tune on the whole record, closely accompanied by the opener. In fact, this EP is shaped like a sideways rainbow or a neatly layered, dumpster-retrieved sandwich: 1 and 7 concern love and friendship, 2 and 6 are about making the most of life, and 3 and 5 are about music. So at this point of course, I am obligated to get questionably thoughtful and semi-serious…

I’m one of those people that believes the left needs to refine and finesse the ways that we discuss issues of social hierarchy, if we are to learn anything from the current state of things. So please believe me when I say that I don’t bring up the following topic lazily. Generally, the vocal style here is nothing but enjoyable, but there were a couple of moments when I asked myself if there was an element of having it on with the West Indies-influenced accent. And the surrounding promo lingo. Fetishising of diversity, or at least the diversity of genres? The minor gripe that the band describe their sound as incorporating hip hop when I hear really no evidence of it beyond some clever wordplay — not a single solitary scratch — doesn’t help. I don’t know anything about the personal background, experiences, or life of singer Lawrence Harrington or the other members, so this is not a “hit and run” criticism, and perhaps there is more nuance to it.

I’m also not saying this is a new trend in Jamaican-origin music, or even binarily saying that it’s a bad thing. I did learn that the area of London The Dub Righters appear to be based near or in (Tottenham) is by some accounts the most ethnically diverse place in all of Europe, with 300 languages and 113 ethnic groups living alongside one another. Which is pretty damn cool, and suggests that whatever is going on here is probably coming from a place of respect. But I think it’s something to think about, whether the embrace of the cultural mosaic can be more honest, and get further to the heart of why it’s a great phenomenon for us all. You don’t have to lose or hide parts of your identity. Keep it real. Especially when using a phrase not yet entirely ruined by white society like “keep it real.” For all their genre-mashing, Bradley Nowell didn’t generally sing in accents other than his own, and it’s difficult to imagine Sublime would be so widely lauded if he had made a habit of it. Tim Armstrong’s success on the other hand I can’t explain, but I think he’s a joke, so maybe it’s just me building a molehill-shaped mountain.

This is not the heart of the record however and I’m troubled by the fact that it takes up so much page space here (I sometimes wonder if I need a Saturday Night Live-style intervention to learn when I’m going on too long). True Sound Killaz is a great time without being mindless “zany” drivel, and I enjoy it a bunch. Reading about The Dub Righters they clearly give a shit about important rad issues, but none of that is directly addressed here, which at this point is frankly a relief. The upstroke twangs are crisp, the messages and lyrics are positive and the dubby reverb is right on. If you want a break from the norm, or this sounds much like the norm for you, I’d definitely work it into your rotation. When you’re being a lazy bastard on a pseudo Sunday, when coffee is doing nothing and the cider doesn’t yet seem wise, the Righters won’t do you wrong.

You can hear True Sound Killaz at the bandcamp player below. To buy it on CD, send money through Paypal as a gift to plastererrecords@gmail.com, including an address and the name of the album. For other details, see the Plasterer Facebook here.

You can see the Dubs’ upcoming gigs at their Facebook page, including with Plasterer Records founders Wonk Unit in London on the 18th.