I live in Croydon (God help me, it’s the literal toilet bowl of England, and I didn’t do a fucking thing as far as I can tell that would mean that I deserve to live here). Apparently, Frauds are from Croydon too. Apparently, Frauds are a “post-hardcore power duo”. OK then. Apparently, Frauds play “ear-battering, eye-gouging visceral punk n’ roll”. To me, that’s a bold statement and a half, mate. They’ve been doing gigs alongside Future of the Left and that Jamie Lenman fellow that used to be in Reuben. Let’s check it out…

According to Frauds, they “wanted to make our debut album a concise blast of everything we want to say, loud noises we want to make and something that’s unique and hard hitting”. Right on. Sounds great in principle. The first track, Let’s Find Out is fucking annoyingly grating, simplistic and repetitive. But the second track, Smooth, I felt showed a bit of promise. Kind of Dischord style post hardcore meets noise rock. But the lyrics are just fucking annoying mate. Third track, Feeding Frenzy sounds a bit like the Sleaford Mods style of vocal delivery soundtracked by The Melvins (sadly without the good bits of either). By the fourth track, Sandwiches, I’ve managed to establish that one of the things Frauds apparently want to tell the world is that they are in somebody else’s garden eating sandwiches. Well that’s fucking profound that, lads. Nice one. Thanks for sharing.

The sludgy, introductory riff to Just Come of Age again shows some promise. Kind of like a slowed down Pissed Jeans. Obviously they were going to spoil it by singing in silly voices, almost like a sarcastic interpretation of Lou Reed on Venus in Furs.
Around about this time, I found myself wondering what Frauds look like. 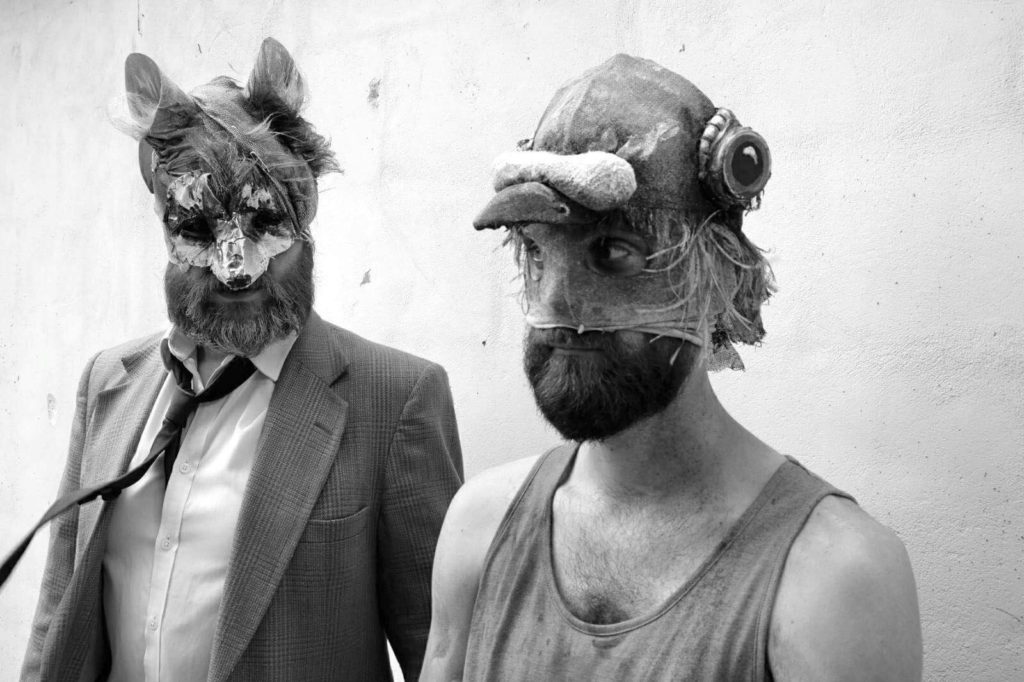 Apparently, a pair of fucking hipsters. But hey, you too could own your own personal Instax photo of them, you lucky bastards. They assure us that it will be hand affixed to the album sleeve, which contains the record pressed on “reclaimed vinyl format”. How very niche of you, Frauds. You must be immensely proud. “This run is never to be repressed”. Thank fuck for that. I hope for the sake of people everywhere with good hearing that it withers into obscurity on the vine. Perhaps if Frauds are (un)fortunate enough to need a repress, they could release it on unspooled cassette tape and package it with a pencil so that the listener can reel it back in for added authenticity.

On the vague subject of the artwork, Frauds had this to say: “We’re really proud of the … artwork consisting of rotten toast shoved into a jar of orange juice (it) sums up ourselves and the album perfectly.” Verily. This pair of tragic twerps ought to stick to cycling to work on their penny farthings and carting typewriters to coffee shops.

But hey, it’s not all bad news. Doom seemed to almost deliver the “ear-battering, eye-gouging visceral punk n’ roll” that was promised in the press release. Realistically, though, taken as a whole, this is self-indulgent at best. It’s thoroughly self-absorbed. I wish I could say it was impenetrable, but alas, really it’s just unfathomably shit – I’m therefore at a loss as to why this whole thing is presented in such a smug, self-congratulatory way. Now, Frauds, I’m sure your mates definitely blow smoke up your arses and reassure you that you’re dead creative and oh-so-clever and relevant. I however, am weally weally thorry but this ain’t art mate, as it’s thoroughly pointless and therefore utterly worthless.

Tony of Nurgle rating: 1/10.
Punchability rating: 100% definitely could benefit from getting digged full-bore in the fucking teeth.

Thankfully for you you can’t at this time stream this anywhere. Count yourselves fucking lucky. I can’t believe I bothered to listen to this more than once. It was a test of endurance, I can tell you.