Well this is an odd one. Gotta admit, I stuck it on and thought Go Team! meets Cornelius with a hint of Andrew Bird. Which it is. It is. So my next thought was “too much nice and happy, but not much longevity for a miserable bugger like me.”  Don’t get me wrong, this album is a joy, but I would imagine I pretty small audience for this is all honesty. But it is fun to listen to without getting dull, as yet. See, for me that is always the issue with the bands I mention. Fun, quirky, clever even, but not with much to hold on to. I keep the albums around knowing that I enjoyed listening to them, but with no real intent to actually stick them on again. 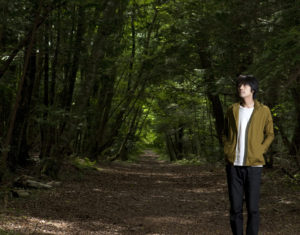 Whoa – there is a lot going on. All manner of instruments getting a run out. Stuff that crops up out of nowhere to make a guest appearance like Stan Lee in any dross Marvel movie that comes out. Sure, there are some songs that really push the boundaries. The last song Bricolage Music is a perfect example of this. So many cuts of various instruments and sounds edited together landing somewhere in between Battles and Go Team! Yet… I like it. It wasn’t too much. It should be, but it isn’t. This song works.

And damn, there are some really lovely little jangly indie tracks like Hikageno on here to boot. It comes across as being written by someone that knows and loves music, but does not want to show off. Dody is a real stripped back Spanish guitar number which does not push too far into Jose Gonzales territory. Sure, it has tones of that, but not too much of that – and not a full bloody album of the stuff (which really is too much for my tastes).

Hollow was the track that made me understand what it was I liked. There is a band called Zita Swoon who have put out double figures of albums. I love them, I really do, but you will not have heard of them (unless you are Belgian or follow ex-dEUS members). They are great. Not a band for everyday, but when the mood is right they are there. As such they find their way out of my speakers much more regularly than Cornelius or Andrew Bird. The level is there without going over the top. That is exactly the same feeling TOSS gives me.

Lift and Lita-Ruta are the perfect choice of first songs for the album. They state what this album is – and in doing so almost scared me off. They also perfectly demonstrates what Shugo did with this album – getting a whole bunch of musicians in the studio to record them just playing ‘anything’ and then using the clips to form songs. It sounds a bit mad, but as someone that often plays Tetris with her furniture; I find it just as satisfying as a newly arranged bedroom. (I would probably not psychoanalyze that statement – I would much rather stay in ignorance.)

Cheese Eye. This sounds like a Tom and Jerry musical track. I dislike musicals. I do. I don’t know what it is but the idea of Emilie Autumn every actually releasing a musical petrifies me quicker than a cockatrice given how much I adore her. (Possibly also not something to analyse.) But, again, it’s good. Fun. Enjoyable. Actually something I want to listen to whilst hoping no one actually hears me hearing it just like when I listen to Girls Aloud.

I’m gonna try and hunt this record down. I think I’ll get a kick out of it for a long time. For anyone else, well, give it a few listens first (a few – once again this was a Polyvinyl ‘grower’ for me). You can check it out:

Then go and buy it, or not.