It’s been a while since we’ve done one of these bad boys, but we’ve recently had an influx of new blood to the Apathy & Exhaustion fold. Comparatively speaking, I’ve not known Matt all that long (probably 3 or 4 years?). I met him through his girlfriend Reneé (shout out Reneé and the Speir-Dean menagerie!). He’s good egg and likes riding bikes. I’ll let you read the “interview” rather than waffling on too much.

What was the very first way that you became aware of punk? i.e. what was your first encounter with punk
My first real exposure to punk was when I was about 11-12. My friend from school had an older sister who was into the punk scene. She always had loud music blaring out from her room. We used to make fun of her because she dressed weird and had green hair, but secretly I thought she was kind of cool.

How did you get into punk / alternative music?
When I was about 13 I started skateboarding, and at the time I didn’t really know anyone else who was into it, so I used to just go and skate on my own. While out some older kid spotted that I had a board and we started talking. Funny enough it turns out he knew the above mentioned older sister, but through him I met a bunch of other kids who were into skating, and through some of them I started to find out about Punk, Metal and all kinds of new exciting music.

What was your first gig?
My first ever gig was in 2001, I was 13 and it was at a local club in Milton Keynes called ‘The Pitz’. It was a School Leisure Centre by day, but on a Friday night the arts hall became Milton Keynes’s premier alternative music venue. It was a local band showcase. From then on, nearly every Friday for the rest of my teens was spent there. My first “Real Gig” was Ozzfest 2001 at the Milton Keynes bowl. 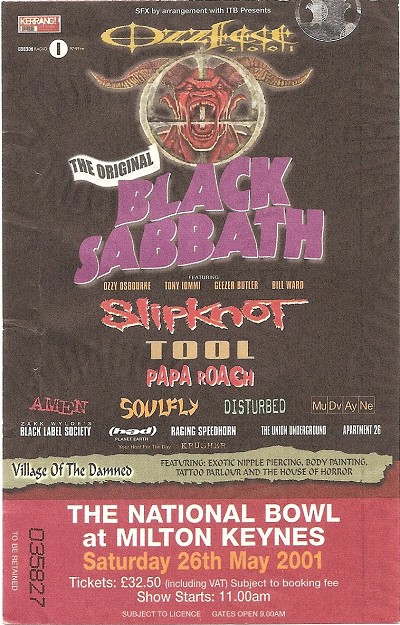 Were you in a band while at high school or college? If yes what was the name, and how bad did you suck?
I started playing the guitar when I was 14 and around the same time my friend Lewis started to learn drums so as soon as I learned about power chords and Drop tuning I would go to his and we would jam in his living room. His parents were awesome. But it never went further than that and YES we sucked. But since then I had been in playing in and out of bands for most of my teens and adult life until fairly recently. Most recently in a band called Crossburner.

What is the biggest influence that punk rock has had on you as you’ve developed as a person?
I think that being a part of the Punk / Metal scene has made me a lot more open minded and tolerant toward other people. When you spend such a big and important part of your life in a community that encourages equality for all, it rubs off on you. But also as I result I find I’m a lot less tolerant of those who behave otherwise.

What has punk rock caused you to question most about the world we live in?
It kind of goes back to the above answer. I think because of the way the mentality has rubbed off on me I have a hard time understanding how or why some people are just crappy people. Why do some people go out of their way to just be an obnoxious arse? Or why do people get their kicks from starting fights? And especially in the UK, these things seem to be so commonplace.

What was the most recent gig you went to? (any genre)
I went to see Oathbreaker at the Underworld back in January.

What was the last record you listened to? (any genre)
Pallbearer – ‘Heartless’

Do you geek? If so, how?
– I consider myself to be quite a film geek , Horror and Sci-Fi in particular.
– I waste spend too much time playing video games
– I enjoy board games (but don’t play them enough)
– I enjoy geeking out over guitar gear

Give me your top ten records EVER, and a BRIEF rundown of why you’ve chosen each one…
In no order in particular…

1 – The Power & The Glory – Call Me Armageddon
From the opening note to the finishing ring out this album is just the most chaotic, feral noise feast I have ever heard, but amongst the carnage there a moments of sheer beauty. This album is for me is the benchmark of what heavy, noisy hardcore will be compared to.

2 – Black Sabbath – Paranoid
I know Sabbath fans will probably snigger at this choice for a favourite Sabbath album, but this is the best era or Black Sabbath in my opinion, when they were still basically a Psych rock band messing around with heavy riffs. Plus … War Pigs and Electric funeral. C’mon.

3 – Ringworm – The Promise
Probably my most worn out CD. Maybe because it was the only one in my car for a while. But this album epitomises everything I want in a metallic hardcore record. Huge riffs – YES, D Beat – YES, Nasty vocals – YES, A massive picture of the devil on the sleeve – YES.

4 – DJ Shadow – Endtroducing
Heavy Metal doesn’t rule the world, and this album showed me that.

5 – Deftones – Around the Fur
This album instantly takes me back to my early teens when I was discovering a new and exciting world of heavy music and bad clothes.

6 – Neurosis – Through Silver in Blood
This was the first album I really heard that showed me that metal could have an atmosphere to it, and that heaviness can be expressed ways other than screaming and playing fast.

7 – Beecher – Breaking the Fourth Wall
This was one of the first really noisy albums I bought, and when I took it home on the recommendation of someone at Virgin Megastore, at first I really didn’t get it. But I persevered and it is now a firm favourite.

8 – Yob – The Great Cessation
This is a perfect record to listen to before bed. Just press play and let it wash over you.

9 – Amenra – Mass IV
I listen to this and genuinely get lost in the repetitions and dissonant melodies. There is something almost hypnotic about it.

10 – Discharge – Hear Nothing, See Nothing, Say Nothing
The album that basically responsible for most of my favourite bands. It is still as relevant today as it was in 1982.