So this is part 4 of this auspicious series, lifting the lid on back stories of the Apathy & Exhaustion writers… This time around, we’ve got Michael Avery. Hilariously enough, I first met Michael when I was DJing the Thursday night punk room (long may it remain in the memory / the affection / the hearts and minds of those that used to go there week in week out). I have no idea what year it was (2000? something like that), but I think it involved some kind of minor argument about my choice of Propagandhi song or something on those lines. But we are all friends now, and often used to go for a curry together as part of “Curry Club” (plus drinks in the Whitworth). 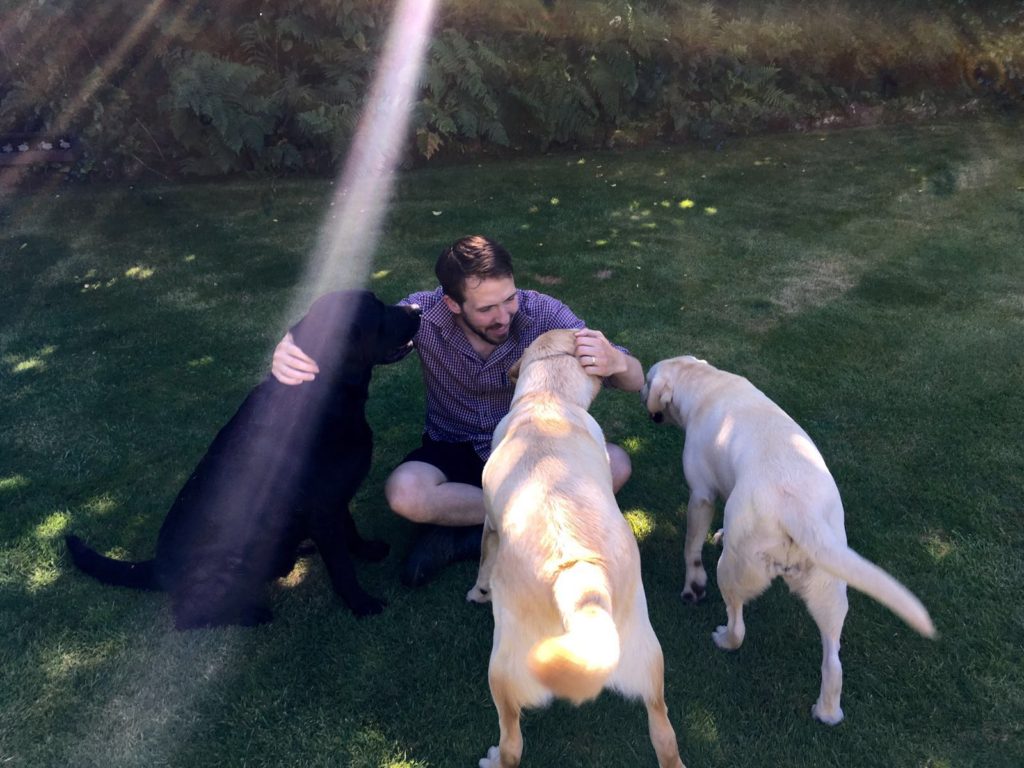 Michael is lucky enough to have the face of eternal youth, and co-owns a lovely dog with Em, but do not let that fool you. He certainly knows his stuff…

1. What was the very first way that you became aware of punk? i.e. what was your first encounter with punk?

October 1991 (I think it was the 17th but can’t be sure) when I was 7 years old. A friend of mine was explaining to the class what he’d got for his birthday and mentioned that his uncle had given him some records, one of which was Never Mind the Bollocks. To a 7 year old boy, the phrase ‘Sex Pistols’ is a thing of wonder as it’s both rude and violent. So I went back to my friend’s house and listened to the records he got. Been hooked ever since.

2. How did you get into punk / alternative music?

I only listened to old school UK punk until about ’97, when my brother got a BMX video which had loads of American bands on it like Misfits, Minor Threat, NOFX and The Descendents. From then on I tried to fill the gaps in my history and also take more of an interest in what was current. Looking back I am very grateful to my brother as I had followed the UK ’77 scene to its logical conclusion and had ventured into New Wave. No child should ever have to own Japan records.

3. What was your first gig?

Thanks to the glory of the internet the details are preserved online. I am also convinced that a live version of Cars that was recorded from that gig (which was a b-side on the Dominion Day single) features my pre-pubescent voice. I like to think I’ve handled the glory well.

Both one and the same – Dirk Wears White Sox by Adam and the Ants. Whilst he is synonymous with New Wave his early work was definitely punk, and he was involved in the London scene from a very early point. There’s a reference to him in Jon Savage’s ‘England’s Dreaming’ (very good read, even if you don’t like that early UK scene) which says that he was seen walking down Kings Road with the word FUCK emblazoned on his back, but it was only close up that it became clear that this had been carved into his skin with a razor blade. He’s an odd character.

5. Were you in a band while at high school or college? If yes what was the name, and how bad did you suck?

First band was when I was 10, and was called The Occupiers. I can’t even begin to describe how shit that was.

As a teenager some friends and I were in a band that went under several names, of which the best was Jet Jaguar (a character from the Godzilla films). We were also terrible, as it was mainly an excuse to drink and smoke. Most of us struggled with the idea of songs lasting more than a minute, largely due to a lack of talent rather than any hardcore ideology. There is a supposedly a live recording of one of our gigs, but I’m fortunate enough not to own a copy of it.

6. What is the biggest influence that punk rock has had on you as you’ve developed as a person?

Being a punk gave me a way to approach the lady who is now my wife (we discussed respective band merch), which certainly beats the idea of using chat up lines. Thank you punk. For personal development it would be that you can make your own world and it’s up to you to make something of it.

7. What has punk rock caused you to question most about the world we live in?

Whether there are realistic answers to the massive problems that humans face.

8. What was the most recent gig you went to? (any genre)

The Fiend, Noise Complaint, Bono (fortunately not that one), Wanweird

9. What was the last record you listened to? (any genre)

CSI Ambleside by Half Man, Half Biscuit

Massively. I have one of those brains that retains useless details, although this is starting to fade with age/booze damage. I apply this to music (who played on what, context of albums are made in etc.), sport (do you know what the record is for most caught dismissals by a wicketkeeper in a three match test series? I do, and I feel *great* about that), and beer (breweries, abv%, how many cask hand-pulls a pub has, and approximately how much you can expect to pay for a beer).

This isn’t in order, as that would take up too much time and I’m not sure whether I’d be achieving something which wouldn’t fall apart a week later.

Minutemen – Double Nickles on the Dime
There’s an insane amount of energy and ideas, and sheer brilliant musicianship on this album. There’s over 40 songs, and many of them could have been doubled in length without becoming dull, but the band hurtles through it all because there’s so much more for them to say. A band who lived by an honourable ethos and who achieved greatness off their own backs.

Presidents of the United States of America – first s/t record
It’s odd in a way which I find funny, but also completely endearing. It’s a hard balance to get right without coming across as FORCED WHA-HACKY but it’s nailed on this. Great riffs too.

Dead Kennedys – Plastic Surgery Disasters
For my money there is no better punk guitar sound than this record. At points threatening and intense, then unsettling and strange. There are several points when I stop picturing the chord progressions in my head and just hear it as music with a life of its own that I can get lost in, and it’s very rare that ever happens. Add to that the biting criticism of Reagan America in the lyrics and a near perfect rhythm section and you have a brilliant record.

NOFX – The Decline
Melodic hardcore doesn’t get any better. Massively ambitious and great in many aspects, it’s something I don’t listen to often because I find the conclusion it reaches (we’re fucked, people tend to be arseholes) to ruin whatever mood I’m in.

Fugazi – Repeater
Like most fans, this is a close contest for me, and there are times when I wonder if I prefer End Hits. Helped show me that technical ability wasn’t a sin and that things can be ferocious even without ear-splitting distortion.

Queen – Greatest Hits II
There’s a number of very self-indulgent songs on here that Freddie Mercury manages to transform into magic. Supremely gifted and utterly compelling. I can even forgive nonsense like I Want It All.

Dismemberment Plan – Emergency & I
I love the evocative ideas explored in the lyrics for different songs (using machines to perform our emotional work much like they’ve taken over physical work, whether impending nuclear annihilation would make you accept people’s failings or be a knob), and the music is like nothing else I’ve ever heard. Even the band themselves come nowhere near it on any of their other records.

Rage Against the Machine – Evil Empire
The politics can be exasperating (thanks to Tony, Killing in the Name Of will always be the fuck-you-I-won’t-tidy-my-bedroom song, although that isn’t on here), but the music is incredible. Heavy hitting metal riffs with enough inventiveness not to just be another entry into the macho pissing contest. I’d love any band that can write something as insanely brilliant as Tire Me.

Sublime – 40oz to Freedom
An album which tries to do a lot of things and pulls them off successfully, with a charismatic front-man who can make songs about getting people hooked on heroin to pay for his own problems sound relaxing.