So, a confession: I heard about Against Me! a little late and by the time I checked them out I was completely underwhelmed. Polished ‘punk’ rock with nothing to make them stand out, I just pushed them to one side. New Wave and White Crosses didn’t do it for me. There was no reason for me to listen to more.

Then I heard that the singer came out as transgender. A trans-female punk. This hit my radar pretty damn quick both through the musical and LGBT press and was a huge revelation. See, this was my own crunch time. The time when I was also deciding whether or not to transition. That is no small thing and I spent years working up the courage to do it. Pretty much 30 years in truth. So I gravitated to Laura Jane Grace like a cat to a fiddle. To have a punk role model, standing out in my ‘scene’ was amazing. Let’s be honest – how often do you see transwomen (or transmen) at punk gigs or rock clubs? Finally, I didn’t feel quite so alone. I still didn’t rate the last few albums though. 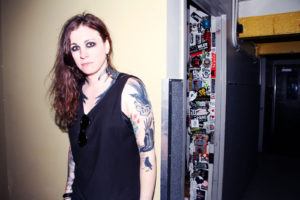 As a result, I was pretty sceptical that I would enjoy Transgender Dysphoria Blues when it came out, but I felt I should try to support Laura and the band following her public coming out.

Clara story time: The day I headed to my hormone doctor for the first time I was a nervous wreck. No idea what to expect. I needed an anthem – something to get me going. I put on Transgender Dysphoria Blues and fell in love with it. The lyrics had special meaning but at the time just being able to stomp to my hospital to the refrain of True Trans Soul Rebel was enough to get me there. Pretty fair to say that I took that refrain to heart. Albeit it with a nerd twist… 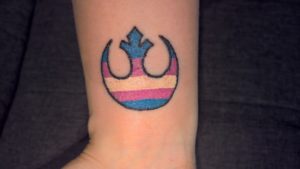 So a new album from Against Me! has a certain importance for me. I was nervous about hearing a new album by them – nervous that it would suck. I grew to love Transgender Dysphoria Blues so much that a follow up had a hard act to follow. And my listens to the first singles let me down. I don’t know what this was. Expectation? Probably. But I was not impressed. Still, when the album Shape Shift with Me started streaming, I gave it a whirl. Hmm. OK. It’s not terrible – has some good tracks on it. Give it another go. Hmm, yer. Pretty sweet. I think I could like this. Third listen – yes. I like it. Phew – and also yay – a new album to rock out to. And more lyrics to pour over, trying to figure out the trans messages in there – the bits I relate to. It is about Laura Jane Grace’s experiences (dating) as a transwoman – oh, so maybe I don’t relate too much. I have been a nun since I transitioned, but still… In a Rolling Stone interview, Laura states that it is an album about trying to find love from the trans perspective, before comparing it to the Streets album A Grand Don’t Come for Free which I am, frankly, shocked made it out of the UK.

Anyways, with little time to really check out the lyrics. I will leave that for another time. Let’s just talk about the tunes. This is a review after all. You want to know if your ears will like the album. 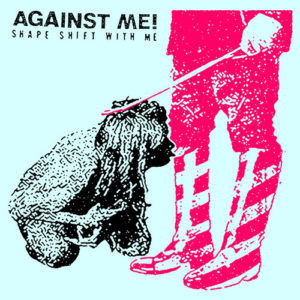 Well, like all good punk albums should, it starts with a shouty cracker, ProVision L-3. I love this, a nice hard start that reminds me of the first Transplants album; it has serious punk credentials. It hammers, beats and yells about social inequality, the ProVision L-3 being one of those full body airport scanners that shows naked pictures of you when you walk through. The message of this song being ‘how can you tell the intentions of someone from a body scan’. This is pretty much about potential terrorists – though it is hard to miss the trans-message, intentional or not, here too.

12.03 settles the pace – which is shame. After a raucous start, the next song feels double slow by comparison. However, that is unfair – to be honest this song could have slotted very easily onto Transgender Dysphoria Blues, one of the few songs on here that could. Also in this category is first single 333 and Rebecca. These songs are very familiar rock and roll fun with a good solid beat for fans of the last album. But as much as I love Transgender Dysphoria Blues, I am glad that most of this album sees us in mostly new territory.

The title of Delicate, Petite & Other Things I’ll Never Be upsets me because, as someone that also suffers from gender dysphoria, it hits close to home. That aside, the song feels much more like something that could have come out of the British Brit Pop fallout, and the same can be said of Boyfriend. It is odd, there is a feeling that reminds me of Mansun or bands of that ilk. The beat also has a hint of the later British bands that came about in almost rock/dance/garage cross-over. There something else there that I can’t quite put my finger on (until I press publish no doubt). But unlike the tedious NME faves of 6 years ago, these songs are good and I love the experimentation that comes with the different types of rock on this album.

Haunting, Haunted, Haunts was the song that put me off when I first heard it. The second single to be released, all I could think of was Social Distortion. It is true, it is very much Distortion-esq. I do like heavy country/punk type tunes and a few listens had it grow on me a lot – I am just glad it is an outlier. I am past Social Distortion but I don’t mind the odd listen here and there.

Crash on the other hand, and maybe All This (and More), take us in yet another direction – landing us in the realms of 80s punk and the Replacements. This is no surprise, we know that Laura likes that band, having played their hit Androgynous after coming out.

I saw the Replacements a few years ago, when I had not long been on hormones. This was at my first gig with oestrogen in my system and to make it worse, I had not quite told the friends that I was with (in Boston). Hearing Androgyny live, needless to say made me cry a little. The song meant a lot to me, and clearly to Laura too. So these songs are lovely, fitting tributes to an awesome band. Especially as Crash is ace.

By now, you may get the picture that this album plays with a whole bunch of styles. Suicide Bomber is no exception. I think that it is fair to say that this is the kitsch, pop-rock song of the album. It would be almost sweet if it wasn’t called Suicide Bomber. I only wish that Laura Jane Grace would have toned down the growls a little, which somewhat detracts from the harmonising with the female vocalist who, at this moment I have no idea of the identity of. An NPR review claims it to ‘ border on the savagely psychedelic’, suggesting a lack of knowledge good psych. If I had to compare it, I would put it in Le Tigre territory, with a similar beat to My My Metrocard or TKO – a comparison I never expected to make. It works, till you get to the chorus which is just pop pop pop really.

I’m finishing off the album breakdown with the two crackers who fight for my fav track, Norse Truth and Dead Rats. Both are proper, ferocious punk song. They rock, have a nice gritty sound and make me want to scream along. But whereas dead Rats is very much a true punk rock song, a damn fine one at that, there is that extra dark edge to Norse Truth. I love it when the singer ‘narrates’ a song with spoken word, as often used on McClusky / Future of the Left albums, and that is utilised here to great effect. It fits the song perfectly and works when mixed with a heavy, Transplants (at their best) type chorus. Both songs are damn fine punk rock anthems – and they are anthems. Norse Truth probably just wins as my favourite on this album, but it is close.

So there you go. Yes, I am a massive fangirl of Laura Jane Grace. She is a spokes woman for all the trans-punks out there. There may not be many, but our spokesperson is mighty. That said, if an album is toss, I’ll call it. This one isn’t. I thought it was, I had to warm to it, but now it heads right up my list of ‘albums of 2016’. The music is varied and experimental, moving through many styles.

If you came here looking for a follow up to Transgender Dysphoria Blues, this is not it. There are a few songs with shades of that album but I suggest that these are the weakest tracks of the album – and they are still great tracks at that. The joy of this album is the experimentation. I would say that this is not like any other Against Me! albums. You never get bored, that is for sure.

Plus, I would buy it just for Norse Truth and Dead Rats – that is how mighty they are!

You can stream the album on Dying Scene here