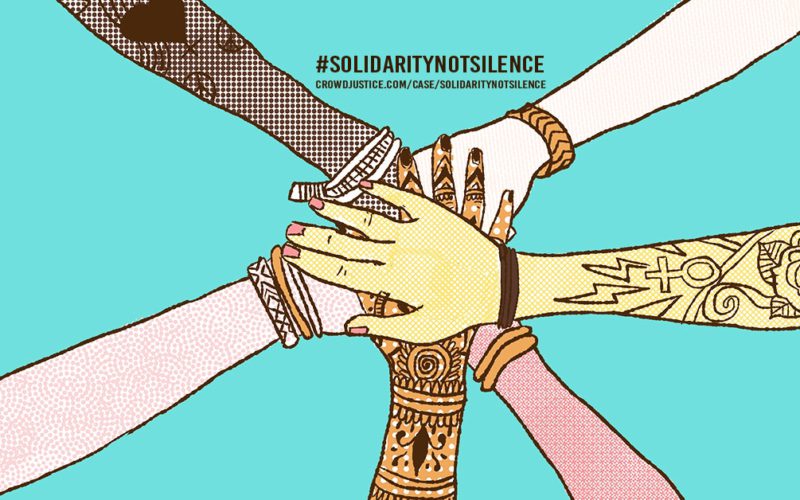 Ever sit back, think about how far we’ve come as a global punk scene? And then you remember that some of the people we look up to or hold in high esteem, or that perhaps younger people might consider to be role models just turn out to be living pillars of human waste? How we have abusers and rapists and misogynistic bullies in our scene and we seem to either ignore them or just allow that stuff to go unchecked? How people that may previously been upheld as a “spokesperson” on important issues now fancy themselves as self-made experts on stuff they have no actual knowledge of beyond collations of third-hand accounts they’ve read on shitty click-bait sites? How previously upstanding citizens have flipped out into bizarre “edgelords”?

How is it that we exist in a scene where we have to have Solidarity Not Silence in order to support victims of abuse and sexual predation in our scene? How is it that the vast bulk of women in our scene have encountered at the least misogyny, through unwanted advances and at worst varying degrees of sexual abuse? How is it that our scene that is supposed to be held up as some kind of moral exemplar of acceptance and tolerance is often far from being that?

We preach about equality and standing shoulder to shoulder with people of colour, women, and the LGBTQ+ community and yet still those people are underrepresented in our scene. The truth is that our so called safe places are somehow falling short of what they promise to deliver. That’s because a lot of people at heart are devious, unreliable and dishonest at best, and at worst are manipulative, dangerous, nasty and plain fucking evil.

People in more mainstream society are so willing to ignore stuff like right wing hate speech by people like Morrissey (because of The Smiths) and in less obviously leftist music scenes to ignore stuff like Phil Anselmo’s Nazi salutes (because of Pantera). I mean we have Lars Fredriksen from Rancid and a bunch of other shit bands choosing a football club with a notoriously fascist following (Millwall FC) to be a fan of, and spouting nonsense about owning all the Skrewdriver records “to take them out of circulation”. Really Lars? Why are you not publicly breaking them with a hammer on Youtube to make some kind of political statement? Listening to them on the regular, then, is it?

Seemingly, John Joseph from the Cro-Mags is a self-proclaimed expert on how vaccines are a myth for jeezerz sake. Then you’ve got yer men there from Amebix spouting his edgy bullshite-ridden tosh like some kind of chocolate fountain at a chavvy wedding (apologies to any chavs wounded by this comment). The mind fucking boggles.

There’s been a seemingly endless parade of wrong ‘uns being outed on the internet, the guy from Brand New apologising for sexual misconduct with what I’m led to believe were underage girls (I don’t know this for a fact), the guy from Champion being accused of being a child predator, the guy from Beach Slang being some kind of pathologically manipulative bully, the guy from Bad Religion even once had a wank on a webcam or something… the list goes on… and over on these benighted shores we have had our fair share of allegations too: The guy from the King Blues (the individual against which Solidarity Not Silence was originally set up), the guy from Gnarwolves… the guy from Bring Me The Horizon that pissed on some girl and glassed her because she rebutted his advances (remember that one?)… These are situations off the top of my head. There’s more. Probably so many I’ve forgotten about some… Anyway, long story short, it’s all blokes, innit.

Which brings us to now. I’ve just been asked to review the new LP by a popular Wyoming punk rock band, which which a popular Californian punk rock label are releasing. However, unless you’ve been living in a hole in the ground with shit stuffed in your ears, you’ll doubtless be aware that the singer / bass player of this band is now the latest in a string of men to have allegations levelled at them due to highly questionable behaviour around sexual predation and bullying against their fans. Now, rightly or wrongly, we have to say that these are allegations, as this hasn’t been through court and no conviction has been made. “Innocent until proven guilty” unfortunately has a flipside of the person making the accusations of being a “liar until proven truthful” – which only goes to highlight yet another fucked up power dynamic in which a man has power over a woman.

To hear what the victim has had to say, you can listen to this podcast below, in which she is interviewed (trigger warnings for sexual assault, rape, misogynistic bullying).

Little or nothing has been said by the person from the Wyoming band beyond suggestions that the victim “was available”. It’s easy to see why there are problems with this. Does he deny the alleged harm caused? No. Does he acknowledge the alleged harm caused? No. What have the rest of the band had to say? Pretty much nothing from what I can gather, which to me just seems like a round of high fives being given and accepted. Or maybe they are worried about losing their meal ticket? I have no idea. It certainly looks like a tightening up of the ranks, with not only the band members but their current label and previous label (based in the Chicago area) are to all intents and purposes standing shoulder to shoulder and seemingly either pretending like nothing happened, or just ignoring it.

I’ve been told by several sources who’ve asked the person against which the allegations have been made (via social media) that they’ve immediately had their messages deleted and been blocked by the person. It seems like nobody has either the maturity, strength of character or willingness to take responsibility to officially answer these allegations. I mean, have they been advised not to do so for legal reasons? I can see that this would make sense. The more cynical side of me just sees another bloke that has decided it doesn’t matter how they behave.

Obviously, all I can do is speculate as I wasn’t there and do not know any of the parties concerned in any of the alleged situations mentioned. I suppose in a way this practically makes me the self-made expert with no basis to go off than third hand accounts of yadda yadda yadda. And yet I feel compelled to say… something. For all the good it will do. This isn’t the world’s most popular website by any stretch. Not within any given genre either. Maybe somebody might read this and look at things differently. In all probability I may as well have dug a hole in the ground and yelled incoherently into it.

How has it come to this? Or has it always been like this? On the face of it, I’ll have to go with the latter option. The internet has a huge role to play as a way of easily sharing information in these current times. Whether this is used as a tool for good or evil is entirely situational and subjective. We’ve moved beyond the days of “word of mouth”. Hopefully the internet can continue to be used as a way of raising awareness and to help people keep safe, or failing that give them a voice.

So this begs a few questions. What can we do as a community when these things happen in our global punk rock scene? What’s the answer? About all we can do is to offer up our belief and support to the “alleged” victims of these situations. Refuse to buy records from arseholes. Take what you read with a pinch of salt. I don’t know. I feel like I’m rambling on. All I can say is that I wish it didn’t have to be like this. It doesn’t have to be like this. It just breaks my heart that it is. Can’t we all just try and be collectively “better”?