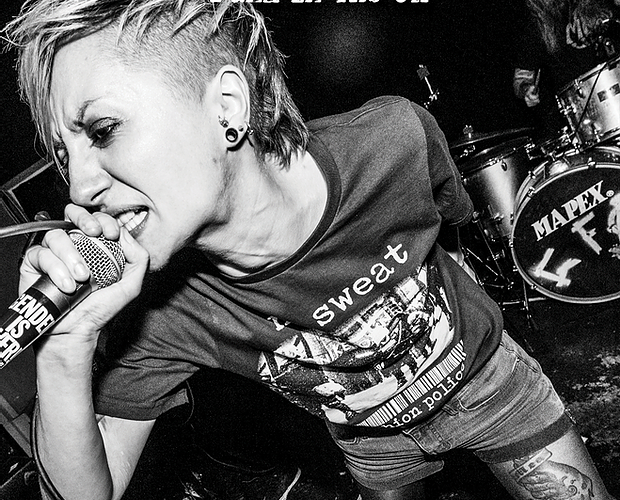 The chances are that if you’ve had at least a passing interest in the history of punk rock upon these benighted shores, that you’ll have stumbled across at least one of Ian Glasper’s weighty tomes on that very subject. There are of course equal chances that you have no idea in the slightest what these books are. Perhaps you’ve seen him slinging the bass for Decadence Within, Burnside, Flux Of Pink Indians, Stampin’ Ground, Suicide Watch, Betrayed By Many, Freebase or, currently, Thirty Six Strategies. Again, maybe you haven’t. Either way, it’s cool. There are unreasonable expectations on people that they should have read everything on the subject and attended every gig ever, especially ones that are occuring simultaneously hundreds of miles apart. The punk scene, mate; fuxache. I suppose that’s one of the core purposes behind the existence of websites / blogs / fanzines such as this one: it all comes down to getting the word out and raising awareness.

Anyhow, the book in question, The Scene That Would Not Die is, for the time being at least, (I assume) viewed by the author as the final chapter in the series. Yep, it’s taken a while, but when you see the size of the bastard thing, you’ll understand why. I suppose Ian can happily claim to have finished a long-winded series of fat books, unlike one George R R Martin, but that’s a gripe for another day.

From what I can gather, the response to this book has been by and large very positive. I have, however, seen some of those snarky remarks that pop up on the internet as a matter of rote these days, which claim that this book is a “revisionist” history or that there’s “loads of important bands missing”. It is the punk scene after all, so it’s expected that some Billy Bigballs gobshite will pipe up with that type of thing but not have the guts to deliver such comments in person. To those people, I eagerly await your books on the subject. Oh? What’s that? You aren’t going to write one? Off you fuck, then.

By the sound of it, Ian sent out literally hundreds of interview requests. Many of these went ignored, were unread, or responded to too late to be included. If there’s one thing you can say for bands of any subgenre on the punk scene (in my experience at least), it’s that they are slack as fuck in terms of being organised to do anything; whether that’s turning up to gigs on time (or at all) or responding to interview requests. From the collosal bunch that are included in this book, I dread to think how many hours went into collating, proofing and curating it all.

I’ve heard of many of the bands covered in this book. Many I haven’t. Some I’ve seen and some I have records by. There’s some seemingly glaring ommissions (see reasons above) and there are I suppose instances where I’ve found myself wondering “what the hell are this lot doing in here?” I suppose the old addage about not being able to please everybody seems particularly of note here. As always, whenever anyone does anything at all that is worth doing, some doyle or other will find fault with it and feel compelled to pass judgement.

For me (you are here to read about my opinion after all), I found this an interesting and informative read. Each band featured gets about 6 pages, in which you get some band history and / or anecdotes in interview form, some photos and a selected discography to go check out. The literal effort of finding something else new to listen to has been removed for you. This is how easy Mr Glasper has made it for us as readers and consumers of music! I applaud this, I really do. Regardless of whether or not somebody moans about this aspect (and doubtless they will; thus is the nature of the true gob-shite, after all), effort has been put in by the author to ensure YOU have to make no effort of your own.

This book is full of little snippets of history, and as you go through (however you choose to do so – the book is presented alphabetically by artist and is therefore not governed by any traditional linear structure, meaning you can pick a band at random for example) you start to see how this whole “band as part of a national scene” thing fits together. People move about, but somehow gravitate towards the orbits of like-minded individuals. Sorcery, mate.

Realisitically, all this really lacks (apart from X, Y, Z band that you really wish were in there but aren’t) is input from record labels, people putting on gigs (or shows if you feel an affinity for the Stateside nomenclature), writing fanzines and running independent record shops. Who I’m sure you will agree all have a pivotal role to play. I’m probably moaning because I’ve done all those things but never been in a band, though. In actuality though, I’d expect a book about those things to be as dry as fuck – who’d read that? It’s not sexy or exciting for most heads out there.

Truth be known, the majority of bands covered here do seem to lean more toward the crusty anarcho end of the spectrum, but that could be for any number of the reasons mentioned above. From a sub-genre point of view, yeah, maybe this is a bit skewed and therefore may not on balance show anything approaching a true reflection of how things lie, or have lain over the past 20 years, but again see above.

Who knows, maybe this book might inspire someone to fill the gaps as they perceive them to be and write their own. That’s no bad thing – if someone out there finds stuff that they feel is worth documenting, they should go for it, in my opinion, just like Ian Glasper has done in this, his sixth book. That’s the traditional sense of DIY in my eyes; not seeing something as you want to see it, or noticing some kind of absence or void that begs to be filled in a way only you seem to understand, and then making it happen, and subsequently sharing it with the community or subculture or however you want to put it.

This worthy addition to any bookshelf is available from Earth Island Books now.